Manu Raju, CNN’s chief congressional correspondent, has covered politics in Washington for nearly 20 years. But before Capitol Hill, there was Bascom Hill.

“There’s no way I would be where I am today had it not been for my Wisconsin experience,” Raju said in 2018. He earned a bachelor’s degree in marketing from the University of Wisconsin–Madison in 2002.

Raju will return to his alma mater next month as keynote speaker for UW–Madison’s 2021 winter commencement. The ceremony will be at 10 a.m. Sunday, Dec. 19 at the Kohl Center. 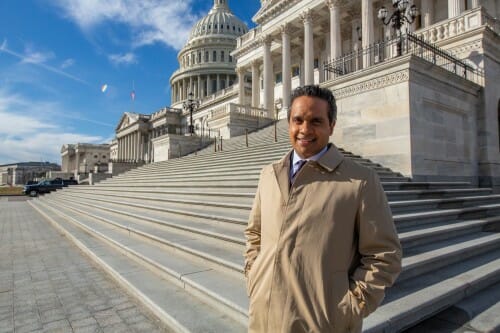 Raju’s meteoric rise in Washington traces back to an unconventional start at UW–Madison. Photo by Oliver Janney/CNN

“We are honored to have someone as experienced and accomplished as Manu address our graduates, and it’s great that he’s also a Badger alum,” says Chancellor Rebecca Blank. “It has been an impressive sight to watch him quickly rise through the journalism ranks to where he is now one of the most respected and visible political reporters in the country.”

Raised in suburban Chicago, Raju got his start in journalism as a student reporter for the Badger Herald, where his first assignment was covering men’s hockey. He worked his way up to sports editor, then later landed an internship with the NBC affiliate in Madison. He also worked for the student radio station WSUM.

He went on to report for Inside Washington Publishers, Congressional Quarterly and The Hill newspaper. He was Politico’s senior Capitol Hill correspondent for seven years and has been a regular guest on political talk shows. He joined CNN in 2015.

Those first years in D.C. brought challenges, Raju has said. After working at a trade publication, he tried to get a job at a newspaper in Washington. He was constantly confronted by employers telling him he was too young — that before even considering a major news outlet in D.C., he should first work in a small town, then a mid-size market.

Instead, he sharpened his reporting and writing skills. Soon enough, his work started to get noticed, and he began his rise in Washington.

“Raju has a remarkable first-generation American experience to share, and he is a fantastic example of Wisconsin’s global excellence,” says Pranav Srivastava, senior class president. “As a high-profile journalist in polarizing times, his perspective will be tremendously interesting, and I look forward to hearing his insights.”

Raju has won multiple journalism awards for his reporting on the major battles consuming Washington and his coverage of campaign politics, including the 2017 Joan Shorenstein Barone award, given annually by the Radio and Television Correspondents’ Association for the best congressional reporting.

Over the years, Raju has retained close ties to his alma mater. His Twitter bio concludes with the phrase, “Wisconsin Badger for life.”

“I love the University of Wisconsin,” he told On Wisconsin magazine earlier this year. “It’s like home to me. I love Madison. There’s really no other place I’d rather be.”