Update: Due to the COVID-19 pandemic, the spring 2020 commencement ceremonies at Camp Randall and the Kohl Center were held virtually. The conferring of the honorary degrees was postponed in hopes of an in-person ceremony. When that proved not possible, the degrees were conferred at the virtual winter commencement on December 13, 2020.

A groundbreaking cancer researcher and a pioneer in the field of contemporary distance education will be awarded honorary doctoral degrees during spring commencement ceremonies at the University of Wisconsin–Madison.

The recipients are V. Craig Jordan, the first researcher to identify the breast cancer prevention properties of tamoxifen, and Michael G. Moore, credited internationally with establishing the scholarly study of distance education.

The honorary degrees, as well as doctoral, MFA and medical professional degrees, will be conferred at the 5:30 p.m. commencement ceremony on Friday, May 8, at the Kohl Center. Jordan and Moore will address graduates at the ceremony, as will John Felder, this year’s alumni speaker. Felder will be representing students who took part in the 1969 Black Student Strike on campus.

On Saturday, May 9, Felder and James Patterson, the world’s best-selling author of the past 20 years, will speak at noon at Camp Randall during the commencement ceremony for bachelor’s, law and master’s degree recipients. Details are available at commencement.wisc.edu.

Honorary doctorates from UW–Madison recognize individuals with careers of extraordinary accomplishment. The Committee on Honorary Degrees considers sustained and uncommonly meritorious activity exhibiting values that are esteemed by a great university.

Preference is given to people connected in some significant way to the state or university, though that is not a prerequisite. Both of this year’s honorees undertook innovative, leading-edge work at UW­–Madison early in their careers.

Dr. V. Craig Jordan’s career focuses on the treatment of hormone receptor-positive breast cancer, the most common subtype of breast cancer, and specifically on the development of selective estrogen receptor modulators, or SERMs. These medicines, discovered during Jordan’s tenure at Wisconsin, have improved women’s health by treating and preventing breast cancer and osteoporosis with the potential to also prevent coronary heart disease and strokes. 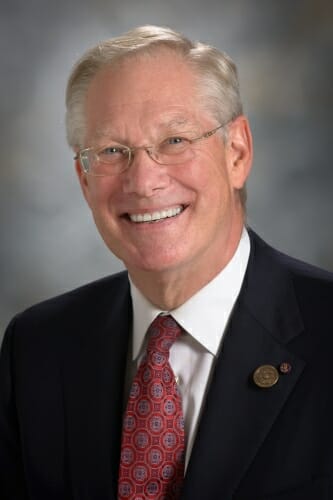 Jordan is considered the “Father of Tamoxifen,” the therapeutic drug that has been credited with saving millions of cancer patients and preventing the development of breast cancer in women at high risk. He did his early work on tamoxifen while leading the UW’s breast cancer research efforts.

Jordan earned a bachelor’s degree (1969) and a PhD (1973) in pharmacology from the University of Leeds in England. In 1977, he spent time as a visiting investigator in the Department of Human Oncology at UW–Madison. He joined the faculty of UW–Madison in 1980. In 1985, Jordan was promoted to professor of human oncology and pharmacology and director of the Breast Cancer Research and Treatment Program at the University of Wisconsin Comprehensive Cancer Center. He remained at UW–Madison until 1993.

After leaving the UW, Jordan held faculty positions and key cancer research-related leadership positions at Northwestern University, the Fox Chase Cancer Center in Philadelphia, and Georgetown University. Currently, he is a professor of breast medical oncology at the MD Anderson Cancer Center at the University of Texas in Houston. He is also the Dallas/Fort Worth Living Legend Chair of Cancer Research. He currently is working to develop a new therapeutic approach to breast cancer maintenance so that women diagnosed with breast cancer can live their normal life spans.

“Dr. Jordan has had an exemplary career that has impacted the lives of thousands of women with breast cancer,” says Dr. Paul M. Harari, chair of the UW–­Madison Department of Human Oncology. “Importantly, many of his pivotal findings were at UW, and he subsequently translated this research into pivotal clinical trials.”

Jordan’s many honors include being appointed in 2019 to be Companion of the Most Distinguished Order of St. Michael and St. George by Queen Elizabeth II for his services to women’s health.

Named as “one of the 128 most important, influential, innovative and interesting thinkers on education of all time” (The Routledge Encyclopaedia of Educational Thinkers, 2016), Michael G. Moore is recognized for establishing the scholarly study of distance education and for pioneering the methods of teaching online. 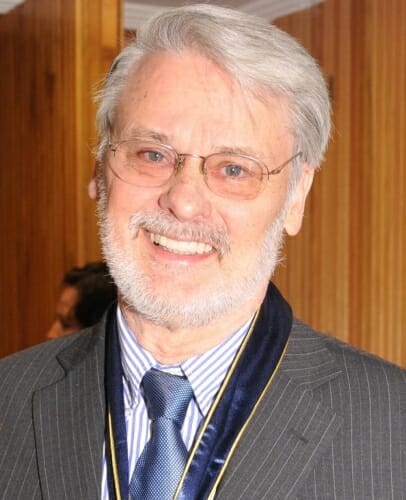 A graduate of the London School of Economics, Moore spent seven early years in East Africa, where he developed a lifelong commitment to creating alternative forms of education, especially adult education, as the means of opening opportunity to the economically and socially deprived. Arriving in Madison as a graduate student in 1970, he undertook an analysis of such programs, developing a theory and definition of what he referred to as “distance education” in his doctoral dissertation. Today, the field is widely referred to as e-learning and online learning. His PhD was awarded by UW–Madison in 1976.

As a visiting professor in the UW’s Department of Continuing and Vocational Education in 1979 and again between 1984-86, he designed and taught the first graduate-level seminars in the U.S. and probably the world.

Many other firsts followed. Moore proposed and helped plan the first national conference on distance education at UW–Madison in 1985. The conference continues to be held each summer at the UW. He established the American Center for the Study of Distance Education at Pennsylvania State University, and he launched the American Journal of Distance Education.

In nominating Moore, Sage Goellner, chair of the Department of Liberal Arts and Applied Studies, and Jerlando F.L. Jackson, chair of the Department of Educational Leadership and Policy Analysis, said Moore has traveled to more than 30 countries to advocate for distance learning. Moore has played a significant role in developing distance education programs in Latin America, Scandinavia, Asia and Africa.

Notable among these programs were 10 years of work in Brazil to develop teacher education, with at one point over 27,000 teachers in training, and development of educational policy in the Republic of South Africa at the time of the first democratic election there. During his tenure as a visiting scholar at the World Bank, he led the development of some of the first international courses online.

Moore served on the faculty of The Open University in the United Kingdom, and Penn State. He retired from Penn State in 2013 as a distinguished professor emeritus of education.