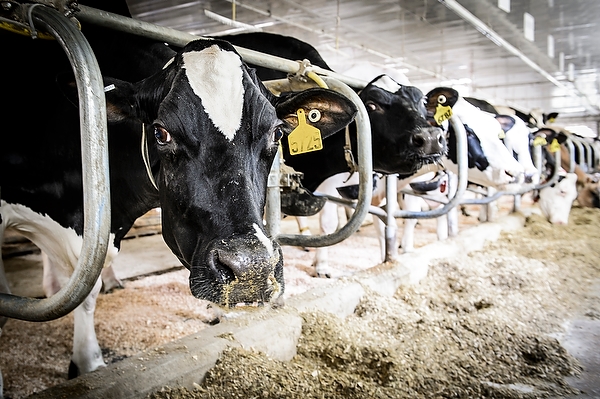 Holstein dairy cows feed at the Dairy Cattle Center at the University of Wisconsin–Madison on May 7, 2014. Photo: Bryce Richter

Serotonin is best known for eliciting feelings of happiness in the human brain, but scientists at the University of Wisconsin–Madison have found the hormone plays a role in milk production in dairy cows — and may have health implications for breastfeeding women.

Cows develop a disease called milk fever when the amount of calcium circulating in their blood decreases. Serious cases are easy to spot: Cows get cold and develop noticeable tremors. But as many as half of all dairy cows develop a milder case of milk fever that can still cause health problems for the cows and inadequate calcium for milk production.

“The more prevalent form is not easy to identify because you don’t see the animal shaking,” says Laura Hernandez, a UW–Madison professor of dairy science. “But because of the low calcium, the cows become susceptible to other diseases.”

This month Hernandez published in the Journal of Endocrinology a study that shows that increased serotonin levels lead to increased calcium levels — albeit in different places in different dairy cow breeds. The study included both Jersey cows and Holstein cows, which received injections of a compound that is metabolized into serotonin.

“In the Jersey cows, serotonin increased calcium in the milk, but in the Holsteins, we saw increased calcium in blood,” says Hernandez. “Because we looked at both breeds, we were able to see that the calcium regulation is different. Now we’re working to understand how this works on a molecular level and translate these findings into treatments for milk fever.”

Healthier cows are a worthy result, but understanding the link between serotonin and calcium may also improve the health of breastfeeding women. Up to 30 percent of pregnant and lactating women treat depression symptoms with drugs called selective serotonin reuptake inhibitors (or SSRIs), which increase circulating serotonin levels.

“If we can figure out the biology, there may be a way we can manipulate the system to improve both human health and cow health.”

Hernandez’s work in dairy cows suggests that the higher levels of serotonin would increase circulating calcium, calcium that would otherwise be strengthening bones. While in cows, this provides benefits for treating milk fever, in humans it causes concern about bone loss. In fact, non-lactating women, men and children who take SSRIs show signs of increased fracture risk and increased rates of osteoporosis.

Breastfeeding creates an additional concern for bone health. Women who exclusively breastfeed for six months lose between six and 10 percent of their bone mass due to calcium being transferred to milk. That bone loss could then be further exacerbated if the mother is taking an SSRI.

Fortunately, Hernandez’s research on a different disease in another species helps to explain bone loss and uncover possible treatments.

“We’re looking at the molecular mechanisms in two different situations, but understanding the basic science really helps both sides,” says Hernandez. “If we can figure out the biology, there may be a way we can manipulate the system to improve both human health and cow health.”