Go Big Read author will share appreciation of, and concern for, Great Lakes 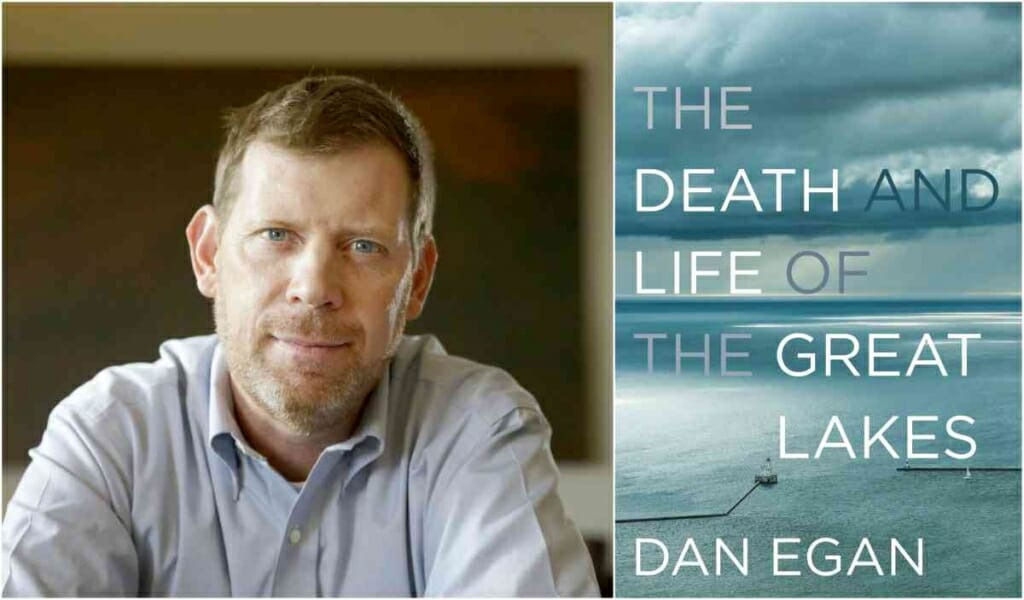 Dan Egan grew up spending summers splashing around in Lake Michigan while visiting grandparents on the Door County peninsula. He knew — the Great Lakes were special.

But it wasn’t until he spent a decade away in Idaho and Utah as a newspaper reporter that he got interested in the lakes professionally.

“I came home and saw the lakes in a whole new light,” Egan says.

He took a job as a feature reporter for the Milwaukee Journal Sentinel but found that the Great Lakes deserved more attention. Since 2003, Egan has covered the Great Lakes as a full-time beat, sharing what he’s learned about the interconnected chain of Huron, Ontario, Michigan, Erie and Superior, which together cover 94,000 square miles.

The full-time beat has evolved into a book, “The Death and Life of the Great Lakes,” which is the selection for the 10th anniversary of Go Big Read, UW–Madison’s common-reading program. Egan will give a talk about his book at 7 p.m. Tuesday, Oct. 16, at UW–Madison’s Wisconsin Union Theater (located in the Memorial Union) in Shannon Hall. No tickets are required for this free event.

Egan, a senior water policy fellow at the University of Wisconsin–Milwaukee’s School of Freshwater Sciences, paints a portrait of an ecological catastrophe happening right before our eyes, blending the epic story of the lakes with an examination of the perils they face and the ways we can restore and preserve them for generations to come.

His book has received numerous accolades and was named the April pick for the PBS NewsHour-New York Times book club. In August, The National Academies of Sciences, Engineering, and Medicine announced that Egan’s book won its top award in the book category. It’s been a busy year for Egan, who took time to answer a few questions in advance of his talk.

Have you been surprised by the response to the book?

Yes. I did not expect it to resonate beyond the Great Lakes region, but I was pushed by my editor at W.W. Norton to write the book for a national audience. He saw something in the material that I didn’t. I guess I was just too close to it after spending more than a decade covering (the lakes) for the Milwaukee Journal Sentinel.

What seems to resonate most with people?

Just the folly of humans thinking they are in control of such a large and complicated ecosystem. I still don’t think we’ve learned that lesson.

Some of these issues seem far off. Many people don’t see or know about the immediate effects. How do you get people to care?

That’s where storytelling comes in. What’s happened to the Great Lakes is a crazy story — how we destroyed the lakes’ natural isolation from the rest of the world with canal building, how that led to a flood of biological invasions that destroyed the lakes’ native fisheries, how we concocted a poison to control one invader (lampreys) and then planted an exotic breed of salmon (Pacific chinook and cohos) to control another invader (Atlantic alewives), how zebra mussels and quagga mussels are now threatening salmon fishery, etc., etc. It’s kind of like “The Old Lady Who Swallowed a Fly.”

If there’s one takeaway for readers, what would it be? Or for people who haven’t read the book, what is one thing you’d like them to know?

I’d just like people to have a basic Great Lakes literacy — where the lakes came from, how they function today, the damages they suffered historically and the potential to reach a new era where there is a greater ecological balance out there. There is nothing on the planet like these five connected lakes that collectively have some 10,000 miles of shoreline — more than the Atlantic and Pacific coasts.

Is there room for being realistic yet hopeful?

Egan’s talk will be livestreamed at gobigread.wisc.edu.

Before Egan’s talk, the annual Water@UW-Madison Fall Poster Session will take place from 4:30 to 6:30 p.m. in Memorial Union’s Sunset Lounge. The free event features research, art, and activities about water in the UW–Madison community. For more information, visit https://water.wisc.edu/fall-poster-session.