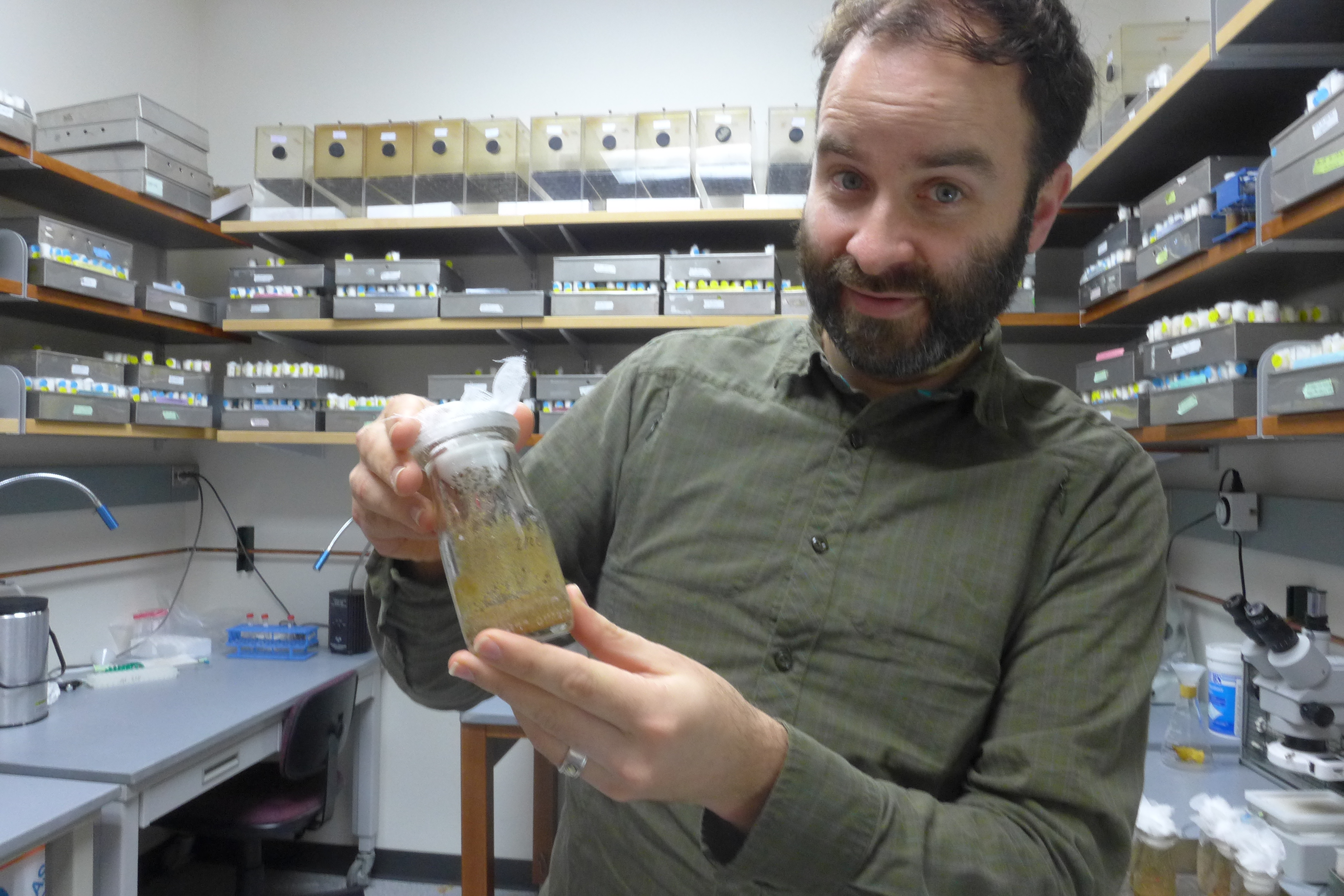 Trust the French to compose poetry from banality. And yet the biological explanation for the many physical differences between males and females remains incomplete.

“How it is that males and females can end up looking so different, when they have basically the same genome?” asks John Pool, an assistant professor of genetics at the University of Wisconsin–Madison.

And although many significant differences can be laid to the famous Y chromosome found only in males, that’s is not the whole story. In a study of fruit flies now online in Current Biology, Pool and colleagues explored a curious color scheme: All fly males have dark abdomens. So do some females. But other females have a light, easily distinguished abdomen.

In practice, a dark abdomen allows a female to masquerade as a male, which leads to fewer mating attempts, which, surprisingly, may confer an evolutionary advantage.

Separated sections from abdomen of Drosophila burlai show (from left) light female, dark female, and male. Notice the resemblance between the dark female and the male? In some conditions, there’s an evolutionary advantage to being able to mask your sex. Numbers refer to section of abdomen. Emily Delaney and Junhao Chen

Pool says mating can be “a little more antagonistic in some species, so females may benefit from avoiding too much courtship and mating, though it obviously would not work for females that avoid all mating.”

The presence of X and Y chromosomes in fruit flies does not explain  the color variation under study. Instead, Pool, working with Emily Delaney and Artyom Kopp of the University of California at Davis and Amir Yassin, who is now at the National Museum of Natural History in France, attributed it to three distinct mechanisms that all regulate the same gene.

Looking through more than 20 Drosophila species for the Current Biology study, Pool and colleagues identified four species with variable-colored females that traced those variations back to the same gene, called pdm3.

“There are genes across the chromosomes that are expressed differently, depending on whether they are in a male or a female.”

In all of those cases, the color variation could be attributed to variations in “regulatory” sections of the gene, which turn pdm3 on or off, or up and down. Because those genetic variations represent separate mutations, the authors concluded that the trait evolved separately in at least three of those species.

The results lead to two insights about traits that vary in only one sex, Pool says. “There don’t seem to be many genes that can change a trait in one sex but not the other.” In contrast, to change pigmentation in both sexes, “there is a broader palette of genes to choose from.”

If the gene choice is limited, “there seems to be flexibility in the regulatory aspect of the chromosome,” Pool says. “It seems there are multiple sequences that can turn the gene up or down, in the correct tissue, and in the female only.”

What does the discovery say about mammals, who shared a common ancestor with fruit flies about 800 million years ago? “It’s not just about X and Y chromosomes,” Pool says. “There are genes across the chromosomes that are expressed differently, depending on whether they are in a male or a female.

“The kind of genetic predictability we found, where an individual gene was affected in a sex-specific way multiple times, has not been demonstrated before,” Pool says.  “This sort of process may underlie a lot of traits in more species across the tree of life.”

The goal of the research extends far beyond understanding flies that eat yeast on rotting fruit, Pool says. “This is a way to understand why it is that males and females are different, what happens at the genetic level over evolutionary time and what constrains the differences between males and females, even though they share most of the genome in common.”