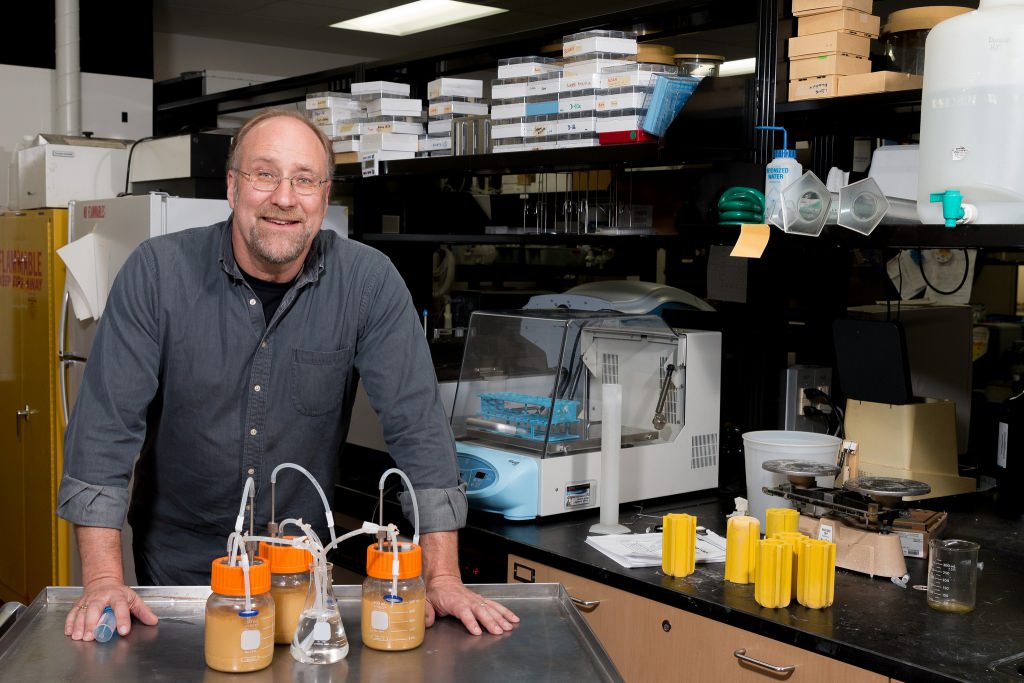 For James Steele, moving from the small fermenters where microbes make cheese, wine and beer to the multimillion-gallon tanks where corn is converted to ethanol was a natural progression.

Steele, the University of Wisconsin–Madison Winder-Bascom professor of food science, specializes in food, beverage and biofuel fermentation. Understanding how bacteria and yeast convert biomass into products has been his stock-in-trade for more than 30 years.

The fermentation of beer and wine can be plagued by contamination with lactic acid bacteria, which make lactic acid rather than alcohol. The same problem affects the ethanol industry.

“We are taking the problem and trying to turn it into a solution,” Steele says. The company will sell bags of bacteria to the ethanol industry to be added to the fermenter alongside the yeast that presently makes ethanol.

The Siouxland ethanol plant west of Jackson, Nebraska. An invention at UW–Madison may improve fermentation results while reducing the hazard of antibiotic resistance. Photo: Ammodramus/Wikimedia Commons

About 70 percent of ethanol plants fight lactic acid bacteria with antibiotics, including erythromycin, virginiamycin and penicillin. But these and other life-saving drugs are the subject of frantic concern as bacteria evolve resistance to one antibiotic after another.

The ethanol industry’s problem arises because one-third of the incoming corn goes out the door, after fermentation. This material, called “dried distillers grains with solubles,” is one of the largest sources of animal feed in the United States says Steele. “Distillers grains can carry antibiotics or bacteria that evolved in the fermentation facility to resist antibiotics.”

The result could be dangerous drugs — or dangerous bugs — in the human food supply.

According to Steele, “Tyson Foods, McDonald’s, Panera, Perdue, etc. say they will, by the end of this year or next year, eliminate the use of meat from animals fed antibiotics, so the primary way to control lactic acid bacteria in the ethanol industry is going away.”

Like the beer industry, some ethanol plants use hops to control lactic acid bacteria, but that’s more expensive and less effective than antibiotics.

As an ecologist of the microbial realm, Steele recognizes that the engineered bacteria must reproduce and survive rising levels of ethanol in the fermenter. To give them a competitive edge, a large number of engineered bacteria will be introduced as early as possible.

The reformulated lactic acid bacteria have also received a gene that produces inhibitors of garden variety lactic acid bacteria, which uses “the same systems they have evolved to compete against each other over millions of years,” Steele says. “We want to give our organisms every advantage.”

As a fringe benefit, the new bacteria consume types of sugar that are not available to the yeast. “At the end of the day, there is more ethanol produced from the same amount of corn,” Steele says, “but we would have never found this if we had not started trying to solve the antibiotics problem.”

Steele’s patent, assigned to the Wisconsin Alumni Research Foundation, covers his concept for altering lactic acid bacteria to fight competing bacteria and to make ethanol, based on unused sugars.

Lactic Solutions was incorporated in October. “We know where every potential customer is,” says Steele, the CEO. “There are about 200 ethanol plants in the United States. Indiana, Iowa and Illinois alone have 59 plants.”

As a legacy of Wisconsin’s leadership in the cheese industry, the state has two of the world’s largest producers of lactic acid bacteria. Lactic Solutions will outsource manufacturing and distribution and focus on providing service to customers and developing new strains.

“We know where every potential customer is,” says Steele. “There are about 200 ethanol plants in the United States. Indiana, Iowa and Illinois alone have 59 plants.”

Steele credits assistance from the Discovery to Product (D2P) program, cosponsored by WARF and UW–Madison. “D2P has been a remarkable experience, in preparing us to talk to customers, helping us understand things from their point of view, developing our business plan, and preparing our ‘elevator speech.’ We would not be here without D2P.”

Other assistance has come from the Business and Entrepreneurship Clinic at the Wisconsin School of Business. Steele has recently begun the gBETA incubator program, “where we’ll polish our story and learn to put together a team to run the company.”

The ethanol industry, Steele says, “understands that antibiotics are a short-term solution, and we plan to provide them with a long-term solution that also increases conversion of sugars to ethanol. Hops are way more expensive and less effective than antibiotics. We think we can do much better for less.”