There are many processes that take place in cells that are essential for life. Two of these, transcription and translation, allow the genetic information stored in DNA to be deciphered into the proteins that form all living things, from bacteria to humans to plants.

Scientists have known for half a century that these two processes are coupled in bacteria, but only now have they finally had a look at the structure that makes this possible. In a paper published in Science today [April 13], biochemists from the University of Wisconsin–Madison and the Max Planck Institute (MPI) for Biophysical Chemistry in Germany have revealed the defined architecture of what is called the “expressome.”

The researchers say this work using the model bacteria E. coli could open numerous doors for research into how bacteria impact human health, including a better basic understanding of gene regulation and possible development of new antibiotics. 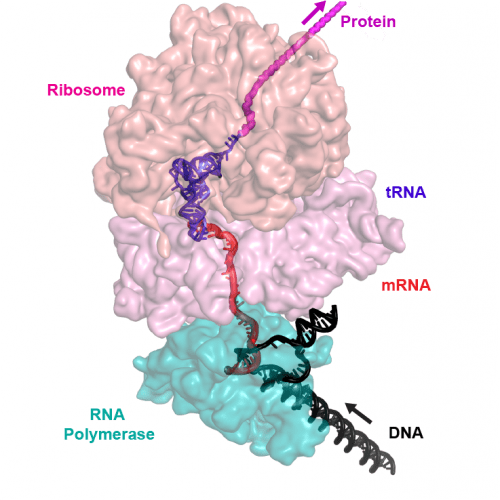 The bacterial expressome. In bacteria, the machine that reads DNA to turn it into a message and the machine that translates the message into protein are combined into single complex or “supermachine.” In humans and other organisms, these machines are distinct. That bacteria link them has important implications for molecular biology, drug development and more. Image courtesy Robert Landick

“The existence of this complex in bacteria has been postulated based on evidence but nobody had ever documented that it exists,” explains Robert Landick, a professor in the Department of Biochemistry at UW–Madison and author on the study. “It’s the first demonstration that you can form one large super-cellular machine out of these two already pretty complicated machines.”

The process of transcription utilizes an enzyme called RNA polymerase to turn DNA into RNA. Following that process, another molecular machine called a ribosome translates the RNA, more specifically called messenger RNA, into proteins the bacteria can use to function.

In the bacterial expressome, the polymerase and ribosome form one complex structure to carry out these two processes in a coupled manner, and this newly solved structure provides a snapshot of this taking place, says Rachel Mooney, a research scientist in Biochemistry and co-author on the paper.

Transcription and translation occur in animals and humans, too, but they are not coupled like they are in bacteria. Rather, they take place in two physically different parts of the cell. If scientists can find a way to disrupt the expressome, they may be able to develop drugs that target bacteria but leave human cells unharmed, the researchers say. 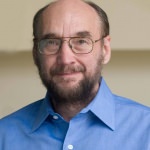 “Any time you find a novel interface in research like this, such as where the polymerase and ribosome come together, that interface becomes a target for drugs,” Landick says. “If you can find something to disrupt that, it can work synergistically with other antibiotics or on its own.”

Landick adds that the finding also extends into studies of the microbiome, the community of microbes in and around the human body. Ongoing research shows how important the microbiome is for human health and understanding gene regulation in these microbial communities is a critical part of these endeavors. The expressome now provides a fundamental building block for this understanding.

“We tend to think about human biology as what goes on in human cells but there’s at least as many bacterial cells as human cells on and in our bodies,” he says. “E. coli may not be really prevalent there, but we use it as a model to extend our research to other bacteria critical to human processes.”

Landick and Mooney teamed up with Rebecca Kohler and Patrick Cramer, a director at MPI. The German team’s equipment helped solve the structure of the expressome, which was assembled using RNA polymerase supplied by the UW–Madison team.

“It was a great example for how to do an interdisciplinary project,” says Cramer. “Our work explains old observations that both processes – transcription and translation – are coupled in these cells.”

Researchers are also interested in the origin of this complex. Why the processes are coupled in bacteria, but not organisms like humans, is a case study in evolution.

“One perspective on it is to simply appreciate that bacteria are much more evolved than we are,” Landick explains. “It’s counterintuitive but technically they have had many, many more generations than we have. The evolutionary pressures that bacteria face have led to the emergence of this very streamlined and efficient way to take DNA and turn it into proteins.”

For Landick, this work also has an important connection. The famed UW­–Madison biochemist Gobind Khorana won a Nobel Prize in 1968 for his work on the molecular basis of gene action and Landick was inspired by his work to pursue a career in biochemistry and molecular biology.

“In our department, Khorana did some really seminal research that defined the genetic code and how the information encoded in DNA is propagated and converted to proteins, a paradigm called the central dogma of molecular biology,” he says. “So did others in the department for years after him. To be performing similar research toward the same goals is very exciting.”

Funding for the research was provided by the National Institutes of Health and European funding agencies.