As a University of Wisconsin Law School student years ago, Jo Deen B. Lowe felt a deep connection to the land where she studied every day. The campus — and the territory around it — is the ancestral home of the Ho-Chunk, her forebears.

“I always appreciated that I had this tie to Bascom Hill and to the people who came before me on this land and the sacrifices they made,” says Lowe, chief judge for the Ho-Chunk Nation Trial Court.

Many of her fellow students, though, were unaware of the Indigenous history of the land, she says. That’s starting to change with recent university initiatives, Lowe says, which is why she eagerly agreed to moderate an upcoming campus discussion about treaties.

“I hope it will provide people with a basic understanding of the importance of where we come from and what our histories are as a people,” she says.

Four of the Ho-Chunk Nation’s leading legal experts, including Lowe, will offer perspectives on the fundamental significance of treaties and Indian law at the live virtual roundtable at 6 p.m. on Wednesday, Sept. 29. All four are alumni of UW Law School.

The panel discussion, titled “Treaties: How We Come to Be Where We Are,” will be the marquee event for Treaty Day 2021, an annual campus commemoration begun three years ago. Join the event online here.

Treaty Day is named for the Treaty of 1832, signed on Sept. 15 of that year. It forced the Ho-Chunk Nation to cede territory that is now Madison and the UW–Madison campus — a place the Ho-Chunk call Teejop (Dejope, or Four Lakes). 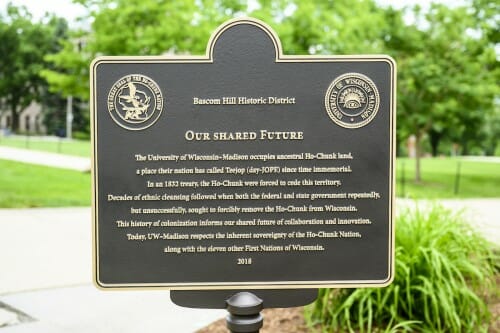 The “Our Shared Future” marker recognizes university land as the ancestral home of the Ho-Chunk. The marker has been traveling around campus to increase its public exposure and will return to its permanent home on Bascom Hill in October 2021. (Click to enlarge) Photo: Bryce Richter

Lowe is a 1985 graduate of UW Law School. Prior to that, she was in-house counsel for a number of tribes and worked at the Great Lakes Intertribal Council.

She served as the district attorney for Jackson County, Wisconsin, and was the first attorney general for the Ho-Chunk Nation.

In addition to Lowe, the panelists are:

“These are four subject-matter experts who have an overwhelming amount of collective experience,” says Molli Pauliot, a UW–Madison Ph.D. student in anthropology who is helping to organize the event. “It’s a unique opportunity for the campus community to get to hear from them.”

The marker was dedicated on Bascom Hill in 2019 and has spent the last two years traveling around campus to increase its public exposure. It is expected to be reinstalled on Bascom Hill, near South Hall, in October.

Omar Poler, who leads the Our Shared Future education effort as  the Indigenous education coordinator for the Office of the Provost and the School of Education, says the marker is only the beginning of the university’s pledge to educate the campus community about the institution’s shared history with the Ho-Chunk Nation and Indigenous peoples. The annual Treaty Day commemoration is another part of this effort, one that is intended to help UW–Madison students and employees realize that “we are all treaty people,” Poler says.

“Many people think of treaties as being in the past and impacting only Indigenous peoples,” he says. “But they are living, contemporary documents that remain relevant and that we all have a stake in. There’s a reason we can all be on this campus today, and it’s because of the Treaty of 1832.”

Poler says his vision is to “provoke discussion in every classroom at the beginning of the academic year about treaties and our relationship as a university with Indigenous peoples.”

Treaty Day 2021 is sponsored by the Division for Teaching and Learning, Office of the Provost, with support from the American Indian Studies Program, the Department of Afro-American Studies, the Department of History, and many other departments and units across campus. Additional events related to Indigenous Peoples Day (Oct. 11) and Native November will be announced soon.