After busy fall, ‘Our Shared Future’ efforts to expand 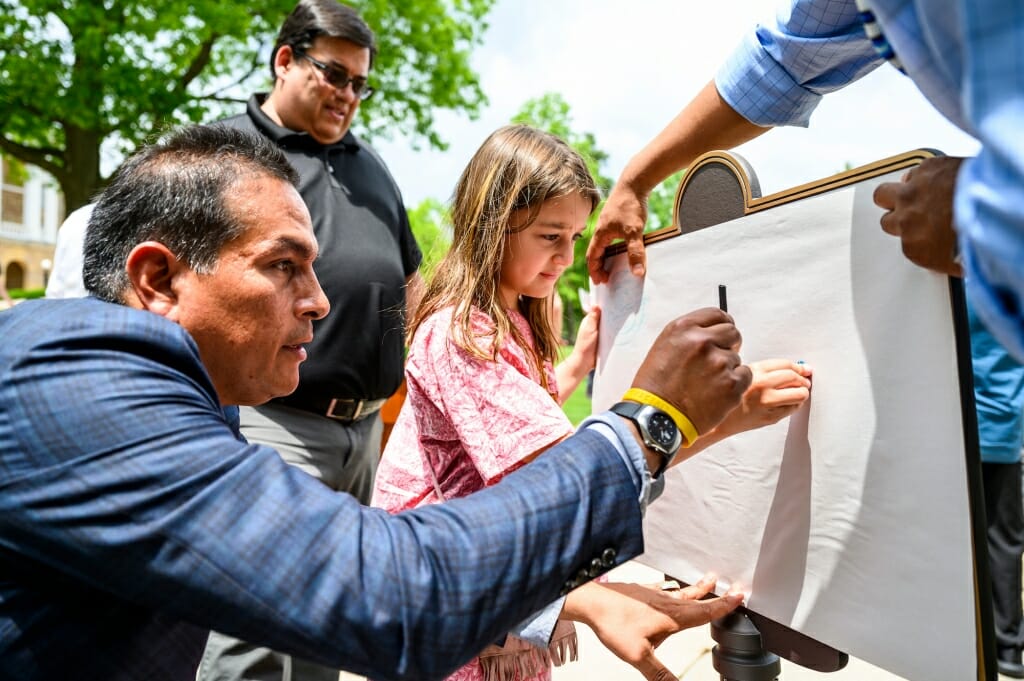 Aaron Bird Bear helps Demetria Abangan-Brown Eagle create a crayon rubbing on paper during the dedication last June of the “Our Shared Future” heritage marker on Bascom Hill. Bird Bear was an assistant dean at the School of Education at the time of the dedication ceremony. He has since been named UW–Madison’s first director of tribal relations. Photo: Bryce Richter

Hundreds of people attended events last fall related to the recently dedicated “Our Shared Future” heritage marker, a first step in a multi-year effort to educate the campus and the broader community on the Ho-Chunk Nation and the history it shares with the university.

The spring 2020 semester brings an even greater emphasis on the marker. Academic units and partners across campus, aided by grants from the university’s Educational Innovation Initiative, have begun hosting the marker and incorporating its message long-term in the university’s teaching and learning.

The units will be weaving the marker’s message into coursework, and several are planning public events. Details will be posted on the “Our Shared Future” website as they become available.

“As Chancellor Blank has stressed, the marker is a beginning, not an end,” says Steven Cramer, vice provost for teaching and learning. “Our objective is to encourage disciplines across campus to delve deeply into the multiple themes embedded in the marker’s words.” 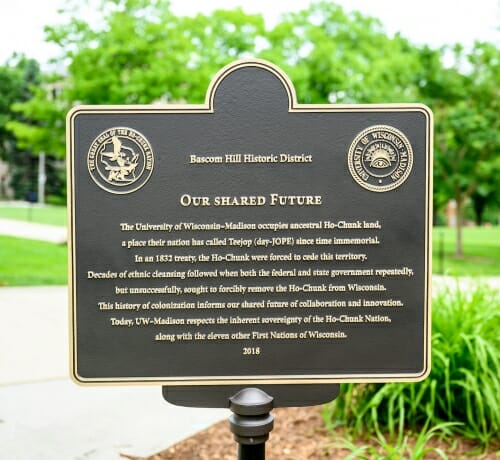 The “Our Shared Future” marker recognizes university land as the ancestral home of the Ho-Chunk. The marker is traveling around campus to increase its public exposure. It will return to its permanent home on Bascom Hill in 2021. Photo: Bryce Richter

The marker, dedicated last June, recognizes university land as the ancestral home of the Ho-Chunk. The marker acknowledges the circumstances that led to the tribe’s forced removal, honors the Ho-Chunk Nation’s history of resistance and resilience, and pledges a shared future based on collaboration and respect.

To increase awareness, the marker has been traveling to public locations around campus and will continue to do so until returning to its permanent home on Bascom Hill in 2021.

The campus educational effort began in earnest in September with a Distinguished Lecture Series talk by Samantha Skenandore, an attorney and member of the Ho-Chunk Nation. The talk drew a capacity crowd of more than 1,000 people — one of the largest turnouts for a lecture in the series in recent years. 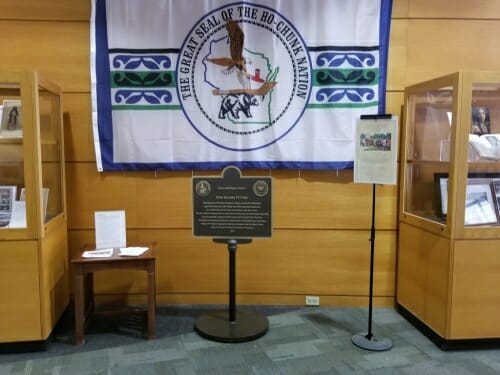 “December already was a month where we were talking about our strategic plan and our mission, so hosting the marker was a great opportunity to include in that discussion many of the topics and shared values addressed by the marker,” says Lisa Carter, vice provost for UW–Madison Libraries. “We heard repeatedly from staff members that they greatly appreciated being exposed to a different perspective.”

Poler praises the library staff, calling their approach a worthy model for campus.

“They did such meaningful work on so many levels,” he says. “They had the public educational piece, but they also provided valuable professional development. And they continue to think deeply about how they can incorporate the marker’s message structurally and institutionally within their organization.”

This spring, seven schools, colleges and departments will host the marker for two or more weeks each. The current host is the College of Engineering, to be followed by the iSchool, the Law School, the Nelson Institute for Environmental Studies, the College of Agricultural and Life Sciences, the School of Human Ecology and the School of Pharmacy.

“To our delight, interest has been really robust,” Cramer says.

Each unit submitted a successful grant proposal detailing at least four structured-learning experiences or events that tie the Ho-Chunk (and other regional indigenous histories and cultures as represented by the heritage marker) to topics of disciplinary relevance. The final round of grants soon will be awarded for the fall 2020 semester. The application deadline is March 1.

The grants are being awarded through the Educational Innovation Initiative, which supports faculty and instructional staff in their efforts to experiment with new technologies and new ways of learning.

“Our objective is to encourage disciplines across campus to delve deeply into the multiple themes embedded in the marker’s words.”

“Classroom innovation is not always about a new digital tool or new learning style,” Cramer says. “Sometimes it’s about bringing actual innovative content into our classroom. In this case, it’s a new look at something that historically has not received the scholarly attention it deserves.”

Exposing more students to Ho-Chunk history should increase scholarly attention to the broader field, as some of those students could go on to become researchers of indigenous histories themselves, Cramer says. For all students, the marker and the educational efforts around it relate directly to the Wisconsin Experience and its pillar of developing empathy and humility.

“As the marker travels across campus, it will take on a little different meaning depending on the host, and that’s the way it should be,” Cramer says. “That’s the richness of our university. It’s not so much about a commonality of content. It’s about each academic unit taking that plaque and using it as a starting point for deeper discussions that really resonate within that discipline.”