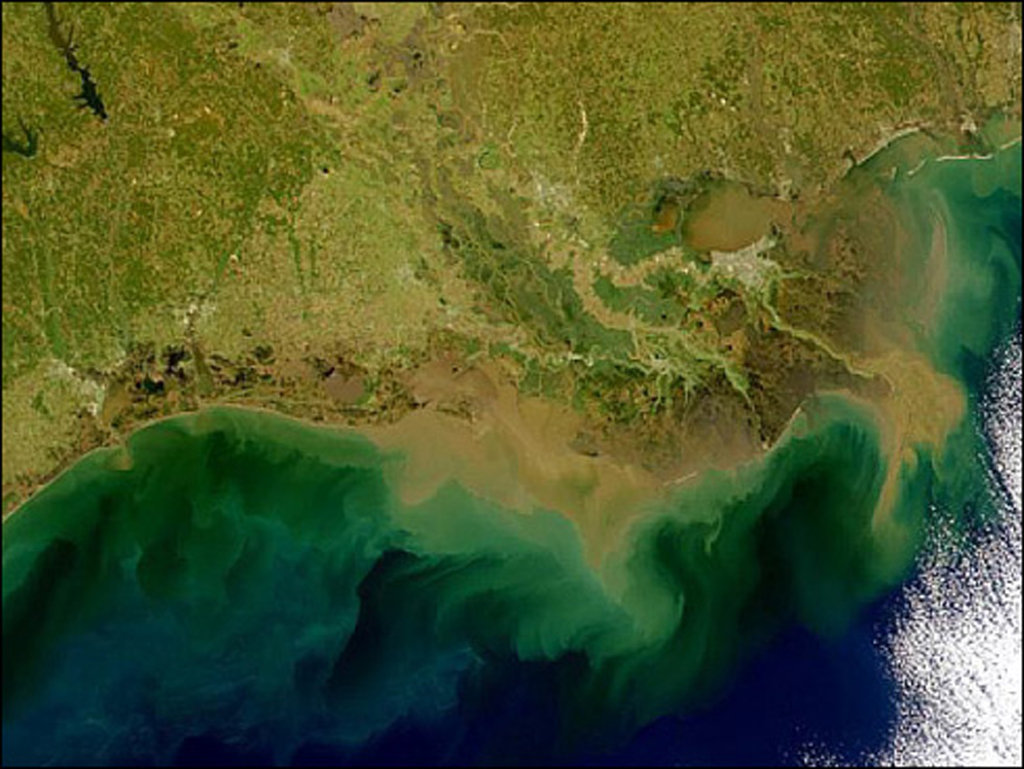 The Gulf of Mexico (above) has a large dead zone due to excess nitrogen and now Green Bay has developed one as well, says Ken Genskow, a UW–Madison professor who is chairing the Nitrogen Science Summit.

Concern about excess nitrogen getting into the state’s waterways and drinking water is the impetus for a Nitrogen Science Summit March 28 on the University of Wisconsin–Madison campus.

The summit is being convened by a coalition of state and federal agencies, agricultural stakeholders and other interested parties. The event will kick off a yearlong series of roundtable discussions focused on the issue.

While nitrogen is a critical plant nutrient and essential for life, excessive amounts can create environmental and human health problems, says Ken Genskow, a UW–Madison professor of urban and regional planning who is chairing the summit. “There are two major areas of concern,” Genskow says. “One is the potential for high levels of nitrogen in drinking water, which leads to health concerns. The other is hypoxia, or oxygen depletion, in water due to decay of algae blooms that grow from too much nitrogen. The Gulf of Mexico has a large hypoxic zone, or dead zone, due to excess nitrogen, and now Green Bay has developed one as well.”

“The nitrogen summit and roundtable discussion will help us take a measure of what we know about nitrogen in Wisconsin’s environment and where we need to learn more,” Genskow adds. “I’d like to see a better understanding of our options to address nitrogen challenges, and how we can build those into management actions that make sense at a farm, community and watershed level.”

The summit is hosted by the UW–Madison College of Agricultural and Life Sciences. Other partners include UW-Extension, the Wisconsin Department of Natural Resources, the Wisconsin Department of Agriculture, Trade and Consumer Protection, the federal Natural Resources Conservation Service, the USDA Agricultural Research Service, and other groups in the public, private and nonprofit sectors.

The nitrogen summit will run from 8 a.m. to 4:15 p.m. on March 28 in the UW–Madison Microbial Sciences Building, 1550 Linden Dr. Roundtable events will be scheduled at various locations around Wisconsin for the remainder of the year.

Information on registration and the summit agenda are available online.