Engineered microbe may be key to producing plastic from plants

With a few genetic tweaks, a type of soil bacteria with an appetite for hydrocarbons shows promise as a biological factory for converting a renewable — but frustratingly untapped — bounty into a replacement for ubiquitous plastics.

Researchers, like those at the University of Wisconsin–Madison-based, Department of Energy-funded Great Lakes Bioenergy Research Center, hoping to turn woody plants into a replacement for petroleum in the production of fuels and other chemicals have been after the sugars in the fibrous cellulose that makes up much of the plants’ cell walls. 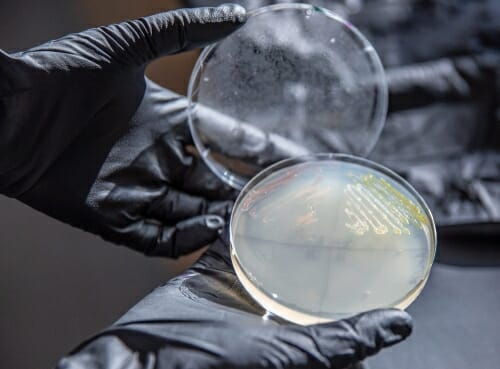 University of Wisconsin–Madison postdoctoral researcher Alex Linz examines a plate streaked with N. aromaticivorans (in yellow), a soil bacterium that could turn a renewable source — lignin from plant cells — into a replacement for petroleum-based plastics. Photo by Chelsea Mamott, GLBRC

Much of the work of procuring those sugars involves stripping away lignin, a polymer that fills the gaps between cellulose and other chemical components in those cell walls.

That leaves a lot of useful cellulose, but also a lot of lignin — which has never carried much value. Paper mills have been stripping lignin from wood to make paper for more than a century, and finding so little value in the lignin that it’s simply burned in the mills’ boilers.

“They say you can make anything from lignin except money,” says Miguel Perez, a UW–Madison graduate student in civil and environmental engineering.

But they may not know Novosphingobium aromaticivorans as well as he does.

Perez, civil and environmental engineering professor Daniel Noguera and colleagues at GLBRC and the Wisconsin Energy Institute have published in the journal Green Chemistry a strategy for employing N. aromaticivorans to turn lignin into a more valuable commodity.

“Lignin is the most abundant source — other than petroleum — of aromatic compounds on the planet,” Noguera says, like those used to manufacture chemicals and plastics from petroleum. But the large and complex lignin molecule is notoriously hard to efficiently break into useful constituent pieces. 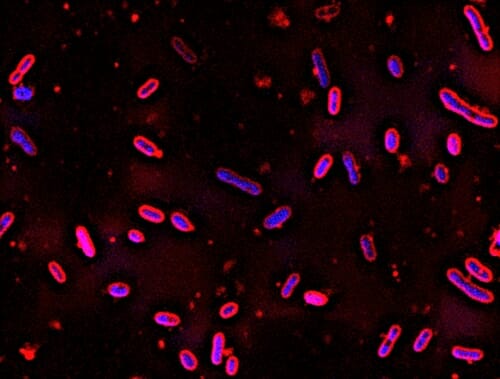 Microscopic N. aromaticivorans bacteria, first isolated from soil contaminated by petroleum products, already had a helpful appetite when it met GLBRC scientists. Their genetic tweaks to the microbe could jump-start a renewable plastics industry. Image courtesy of GLBRC

Enter the bacterium, which was first isolated while thriving in soil rich in aromatic compounds after contamination by petroleum products.

Where other microbes pick and choose, N. aromaticivorans is a biological funnel for the aromatics in lignin. It is unique in that it can digest nearly all of the different pieces of lignin into smaller aromatic hydrocarbons.

“Other microbes tried before may be able to digest a few types of aromatics found in lignin,” Perez says. “When we met this microbe, it was already good at degrading a wide range of compounds. That makes this microbe very promising.”

In the course of its digestion process, the microbe turns those aromatic compounds into 2-pyrone-4,6-dicarboxylic acid — more manageably known as PDC. By removing three genes from their microbe, the researchers turned the intermediate PDC into the end of the line. These engineered bacteria became a funnel into which the different lignin pieces go, and out of which PDC flows.

Bioengineers in Japan have used PDC to make a variety of materials that would be useful for consumer products.

“They have found out the compound performs the same or better than the most common petroleum-based additive to PET polymers — like plastic bottles and synthetic fibers — which are the most common polymers being produced in the world,” Perez says. 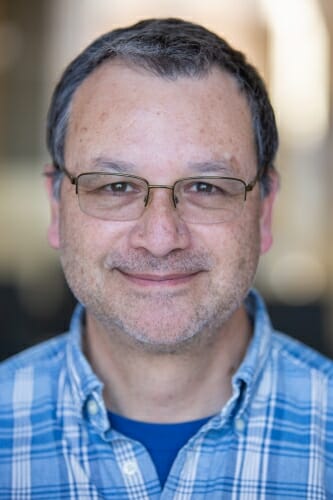 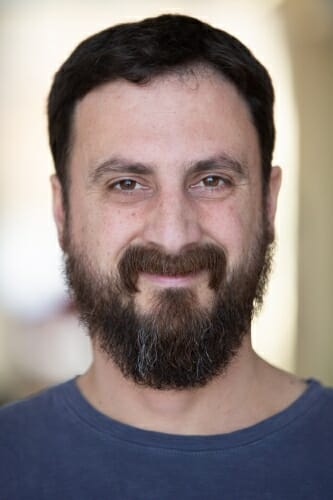 It would be an attractive plastic alternative — one that would break down naturally in the environment, and wouldn’t leach hormone-mimicking compounds into water — if only PDC were easier to come by.

“There’s no industrial process for doing that, because PDC is so difficult to make by existing routes,” says Noguera. “But if we’re making biofuels from cellulose and producing lignin — something we used to just burn — and we can efficiently turn the lignin into PDC, that potentially changes the market for industrial use of this compound.”

For now, the engineered variation on N. aromaticivorans can turn at least 59 percent of lignin’s potentially useful compounds into PDC. But the new study suggests greater potential, and Perez has targets for further manipulation of the microbe.

“If we can make this pipeline produce at a sufficient rate, with a sufficient yield, we might create a new industry,” Noguera says.

The Wisconsin Alumni Research Foundation has filed a patent application on this technology.

This research was funded by grants from the Department of Energy (BER DE-FC02-07ER64494 and DE-SC0018409) and the Chilean National Commission for Scientific and Technological Research.