Invention is an insulin innovation

A University of Wisconsin–Madison alumnus is now selling a patented device to help people with diabetes safely and easily inject insulin with just one hand. Once the Steady Shot device is mounted on a standard insulin injector, its two plastic wings compress the skin, raising a bulge of fat to receive the injection.

Fat is the target because when injected into muscle, insulin, the hormone that regulates blood sugar, can cause seizures if absorbed too quickly.  Traditionally, the user forms the bulge with the thumb and one finger, while holding the injector with the other hand. The need to use two hands limits the area that can be injected. 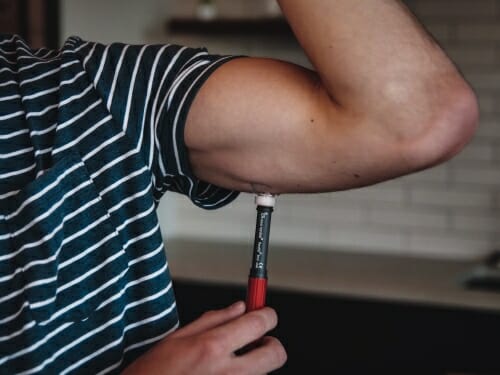 With the ability to do a one-hand injection, suddenly diabetics can spread out the injections and preserve their skin. Photo courtesy of Steady Shot

Allowing one-handed injection has multiple benefits, says inventor Shawn Michels, a 2018 graduate of the Wisconsin School of Business and type I diabetic.

“Normally, you need one hand to compress the skin, and the other to operate the insulin pen, which does the injection,” he says. “That means you’re limited to the abdomen and thighs, but lifelong diabetics are injecting several times a day, which causes scarring and lipohypertrophy, a buildup of fat globules after repeated injections.”

These globules are not only unsightly, but because they cause uneven insulin absorption, these structures impair consistent control of blood sugar.

Now that he can inject in the back, buttocks and back of the legs, even the arm, his available injecting area is almost doubled, Michels says.

The injection innovations on the market all have moving parts and much greater complexity, compared to Michels’ one-piece attachment. 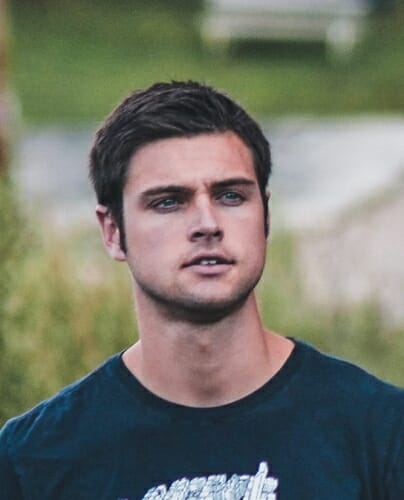 Shawn Michels, 24, invented a new insulin-injection device in 2016 while earning a B.A. in business at University of Wisconsin–Madison. “Steady Shot” is now on the market. Photo courtesy of Shawn Michels

Michels began germinating the idea while in business school at UW–Madison. “Back when I was an undergraduate, I was thinking about how to inject – you may have to do it while driving, or in an airplane, and it’s always awkward when reaching certain injection sites,” Michels says. “I saw these other devices, and had the Aha! moment when I realized that if you press these two wings against the skin, a bulge of skin and fat would rise up. That realization led me to a much simpler design without moving parts.”

The wings have other benefits, Michels says. First off, they tend to hide the needle, reducing the fear response that needles often initiate.

Second, when the device presses against the skin, the user initially feels the wings, which make a much bigger impression than the needle. “When they feel the arms on the skin, they will not feel the needle going in,” Michels says.

That’s particularly helpful for young people with a new diagnosis, Michels says. “They are often scared of the needle, but Steady Shot obscures the sight of the needle, without impairing the injection.”

Third, moving the injections around the body is better for the skin, and easier on the user, he says. “We do this multiple times a day, and that can produce fat globules and scarring. Any way we can spread the injection around should give the skin a rest and reduce these side effects while allowing us to receive our lifesaving medicine.” 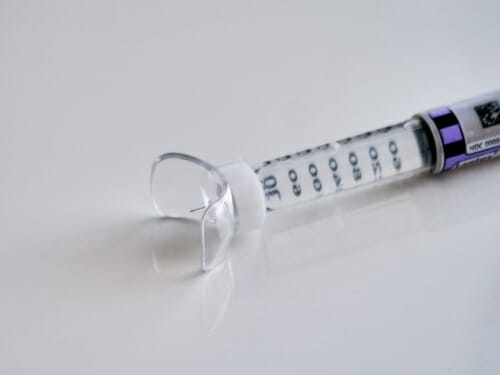 Unlike some injection innovations, Steady Shot relies on no moving parts. The “wings” bunch up the skin to ensure that insulin is injected into fat, not muscle. Photo courtesy of Steady Shot

Michels benefited from several business plan competitions while at UW–Madison. What helped most, however, was Discovery to Product, or D2P, a program to help university students, faculty and staff evaluate promising ideas and usher them toward the market.

D2P funding supported creation of the Steady Shot mold, and the group provided contacts at professional networks. “They connected me with UW Health, which helped me understand the lay of the land in the hospital. I thought initially this could be used inpatient in the hospital for all sorts of injections, but they convinced me it would be best for outpatients, for self-injectors.”

D2P also provided a link to business mentors, Michels added. “They helped me select the best part of market to tackle first, and talked about the lean startup model. When I started, I was completely in the dark. I did not know anything about entrepreneurship; I was starting at ground level.”

On Monday, Michels launched a crowd-funding campaign at Indiegogo. “The most surprising part of the journey was how long things take,” he says. “You think, ‘I have this really simple device, it’s plastic, one piece.’ You think you could get market instantly but that hasn’t been the case. But now is the time. We’re really happy with the reviews and testimonials we’re getting. This simple device solves real problems.”