A startup company with deep roots on the University of Wisconsin–Madison campus will be featured at a French trade show Feb. 11-15 with its wearable system designed to help runners avoid injury.

Torq Labs won a booth at the Avantex Paris fashion-tech show after earning first prize at the previous show in September. Avantex focuses on high-tech fabrics, especially those that integrate digital technologies. 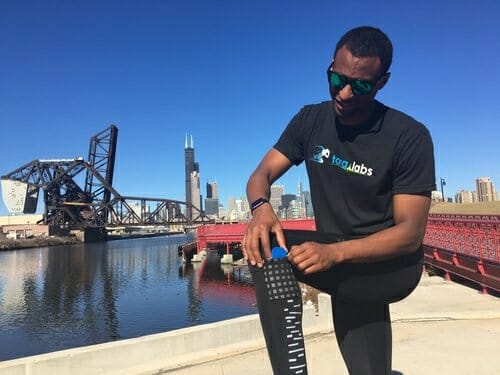 A runner places a wireless sensor into a pocket in a pair of K-tech leggings. The sensors detect gait imbalance and movement asymmetry that can lead to injuries. Photo courtesy of Torq Labs

Torq Labs K-tech sensors, placed above and below each knee and at the sacrum, wirelessly send data on movement and location to the runner’s smartphone, which searches for telltales associated with lower body injury. The information is designed to help improve the user’s coordination and balance, says co-founder Julian Holtzman.

“We are looking for gait imbalance and movement asymmetry, such as taking a longer stride on the right or left,” says Holtzman. “Some runners kick one foot sideways, instead of focusing on forward and back movement. They may have a wobble or a slight collapse at the knee as they land on that foot. Many of these asymmetries or compensations are recognized precursors to injuries, but the runner is often unaware of them — and a running coach is seldom around to notice, either.

“A triathlete coach told us, ‘I send them out to run six or 10 miles, but I am not with them, so I cannot see their gait,’” Holtzman says.

The idea for a motion analysis system was born in November 2015 by the six Torq Labs co-founders, five of whom were UW–Madison students or alumni. The technological bases of the system are the declining size and price of sensors and the boom in Bluetooth connectivity.

The system also had roots on soccer fields, where Holtzman and Josh Theirmann, another co-founder, have had significant injuries.

Holtzman has UW–Madison master’s degrees in public health and public administration, plus experience working with wearable sensors. He wondered if sensors placed near the knee could detect dangerous motions. “I was not an engineer, but I asked, ‘How much would it take to try that?’ and John O’Connell, who’s now our chief technology officer, told me $100. I ordered the parts, he put it together, and it worked. It seemed like an off-the-wall idea at first, but we kept running with it.”

Each pair of the K-tech leggings carries five sensors, creating a torrent of data. Torq is developing analytical techniques to, for example, measure changes in the gait during a run. “We start by looking at your normal movements,” Holtzman says. “Even if they look fine, maybe your gait changes after mile five and you lose efficiency. These are clues that we can only see because we have taken the technology out of the lab.”

If the movement threatens to weaken or damage the leg, “We encourage you to take action to reduce the risk of problems,” Holtzman says.

Torq Labs can also analyze acute injury. “If you run and hit an uneven surface, there may be a quick overexertion. We would record that your knee moved so far in this direction and alert you about this single, acute event: ‘You pulled your left knee outward at this time, and here’s what you can do about it.’” 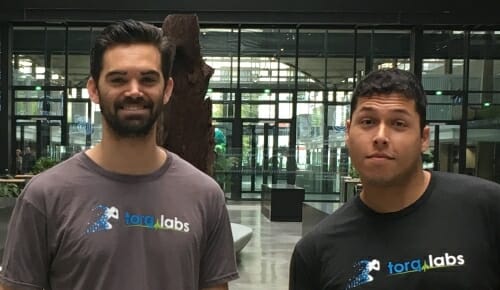 Triathletes are the company’s first target consumer market.  “Triathletes already collect a lot of data, and they spend months training,” Holtzman says. “If they get injured before a race, that all goes down the tubes. If we can help them see trouble coming, that could be the basis for taking action to avoid the injury.”

Soccer helped inspire Torq Labs in the beginning, but it also played a second role through happenstance. In November 2016, Holtzman was visiting ex-teammates in Europe when his roommate at a hostel, another entrepreneur, connected him with Roxanne Varza, director at Station F. “She’s a power player in the Paris startup scene, and she invited me to apply to Station F’s Founders Program. Currently, Torq is the only American team at the world’s largest tech campus, working alongside several hundred startups from all over world.”

Through work in Paris and on campus at UW–Madison, the company developed the sustainably sourced prototypes it showed at Avantex Paris in September and continues to refine.

Torq Labs demonstration video of K-tech sensors in use. The information is intended to improve the user’s coordination and balance.

So far, so good, says David Bell, director of the Wisconsin Injury in Sport Laboratory and associate professor of kinesiology at the university. “Researchers know that if you are doing an improper movement over a long period, you are going to deteriorate. Torq Labs has developed a common-sense application of research that is already out there. I see their product as helping athletes avoid putting their bodies in potentially dangerous positions, and it also has the benefit of aiding athletes to recover from injury.”

UW–Madison played a critical role in Torq Labs from the beginning, Holtzman says. “Without UW–Madison, Torq Labs surely would not exist today. Five of the six founders went there, and the other went to UW–Milwaukee. Each of us comes from a different discipline — engineering, medicine, athletics, statistics and computer science — so we can work this problem from all angles.”