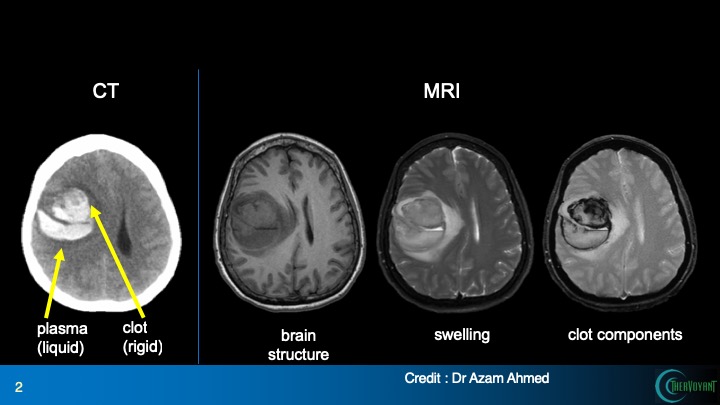 MRI, right, gives much greater detail on a hemorrhagic stroke than CT. Note that brain swelling and the components of the clot are clearly delineated in MRI. Seeing the clot structure should enable the physician to deliver a clot-busting drug more precisely.

Stroke treatment has come a long way in the past decade: patients, hurried by the slogan “time is brain,” are visiting stroke centers for injections of clot-busting drugs to prevent brain damage. But that progress only concerns ischemic strokes, which occur when a clot interferes with blood flow.

Unfortunately, there is no proven treatment for the less common but more deadly hemorrhagic stroke, caused by a bleed in the brain: the “standard of care” is watching, waiting and hoping. Although only 13 percent of strokes in the United States are hemorrhagic, the American Stroke Association says they cause 40 percent of stroke deaths.

The pool of blood in a hemorrhagic stroke, which can be as large as a tennis ball, damages brain tissue by direct contact, by destroying connections among neurons, and by exerting pressure on surrounding brain tissue.  Doctors have tried for years to limit further damage by quickly removing as much of the clot as possible – without risking a deadly new bleed.  Clot removal reduces intracranial pressure and the amount of blood that will eventually break down and damage healthy brain tissue.

But MISTIE, a nation-wide study of clot-busting in 500 hemorrhagic stroke patients, showed that removing much of the clotted blood reduced mortality but did not lead to better brain function or increased independence one year later.

The study, published in The Lancet Feb. 7, evaluated catheter application of clot-busting drugs (which are also used to treat ischemic strokes). The study concluded that the tested treatment was not ready for normal clinical use in bleeding stroke.

The results were a classic good-news, bad-news situation, says Walter Block, a professor of biomedical engineering, medical physics, and radiology at University of Wisconsin–Madison, and an expert in magnetic resonance imaging, or MRI.

True, the desperately awaited results were underwhelming. But on the other hand, blood extraction showed a direct benefit: More blood removed translated into a lower death rate a year after treatment.  Furthermore, MISTIE patients treated at UW Hospital experienced “a drop in the hospital stay from four to two weeks when a large portion of the clot was removed,” Block says.

Hemorrhagic strokes can leave a blood clot bigger than a tennis ball, causing difficulties with speech, cognition and movement.

The shortcoming may lie in incomplete treatment, resulting in the method used to guide the clot-buster drug into the rigid blood clot. The CT (computerized tomography, a form of X-ray) scanner used to monitor the clot busting process cannot directly “see” where the drug is working. Instead, it “sees” the clot change shape as it dissolves.

Because the surgeon must strictly avoid dissolving the edge of the clot, where there is a high risk of damaging rebleeds, Block says, “The MISTIE trial was designed to use a few small doses, periodically take new CT images, and move the catheter occasionally. The slow and tedious process naturally leads to varying results in shrinking the clot.”

To Block, the uneven results call for a better way to distribute the drug within the clot, namely MRI, which can directly “see” the drug, allowing the surgeon to assess progress by simply watching the drug spread through the clot.

“We’re trying to ensure that the treatment gets to the right place,” says Block, who is developing the system in collaboration with Andrew Alexander, a professor of medical physics and psychiatry.

“MISTIE has delivered some encouraging news, but I think there is big room for improvement,” says Azam Ahmed, an assistant professor of neurosurgery at the UW School of Medicine and Public Health, who was funded by the National Institute of Health to oversee UW’s participation in the MISTIE trial. “Hemorrhagic strokes can leave a blood clot bigger than a tennis ball, causing difficulties with speech, cognition and movement. Now that we have this suggestion that dissolving and draining out the clot helps preserve brain function, the next step is to dissolve it more rapidly and thoroughly. I think this points toward guiding the catheter placement and drug delivery with MR.”

By occasionally monitoring the rate and location of drug delivery, MR could reduce the time it takes to shrink the clot to eight hours or less.  Current MISTIE-level treatment requires two to four days, and it’s not yet standard care.

Block and Alexander founded a UW–Madison startup called InseRT MRI in 2011, with the goal of guiding drug placements in the brain with MRI, under a license to a patent held by WARF.  InseRT, using the business name TherVoyant, is developing software and systems that will allow neurosurgeons to work in MR suites, using familiar procedures – an essential step for adoption.

Back in 2014, when the company obtained a Small Business Innovation Research (SBIR) grant from the National Cancer Institute, its focus was guiding drug treatment for brain cancer.  Ahmed, due to his surgical expertise and access to UW research facilities, served as the lead investigator in evaluations of TherVoyant’s approach to treating brain cancer through a subcontract of the NIH-funded SBIR.

Ahmed, who meanwhile was also confronting the shortcomings of brain clot surgery through his work with the MISTIE study, suggested that TherVoyant’s MRI guidance might guide a quicker, more thorough job of dissolving the clot.  According to TherVoyant’s CEO, Terry Oakes, “We thought, ‘That’s great, but that’s not what we do.’ But if a surgeon says they really want something, we should pay attention.”

Although the 10-year MISTIE trials did not test Block’s MRI guidance, he says the now-complete Phase III trial provides a clear roadmap toward better treatment. “The drug works, we just need to find a better way to guide and monitor it.  Consistently reducing clot size seems to be the most promising tactic for reducing disability and death, and so it should be pursued as top priority.”

MR guidance is becoming more common in surgery, and it has great potential with bleeding stroke, Block says. “There are no guarantees, but our ideas could leverage the nation’s ten-year investment in MISTIE to create a positive return and enduring benefits for patients.”