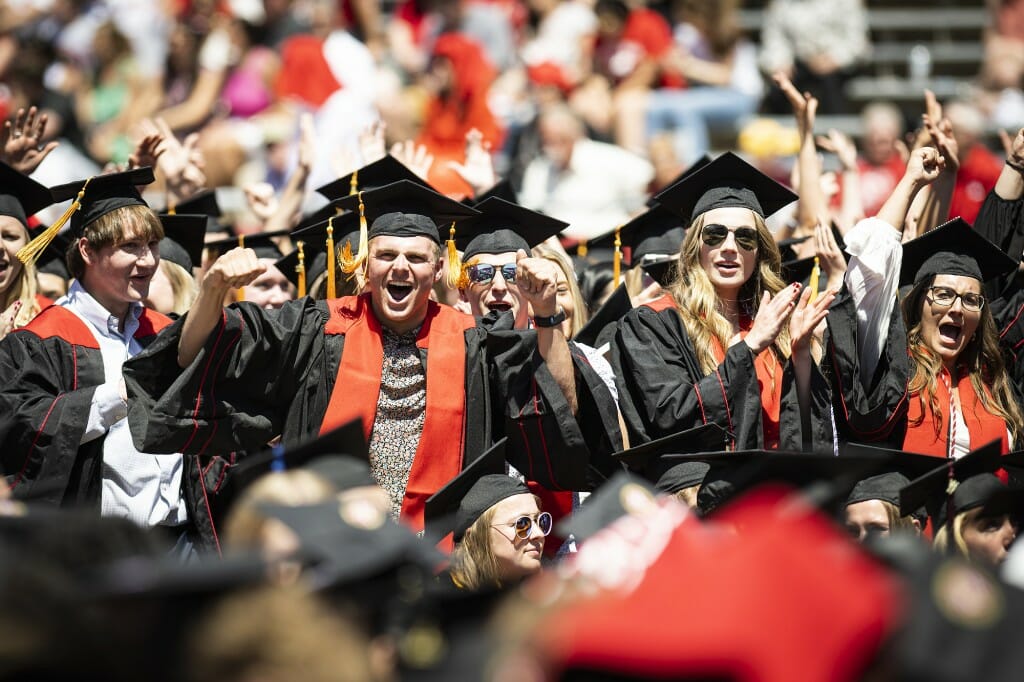 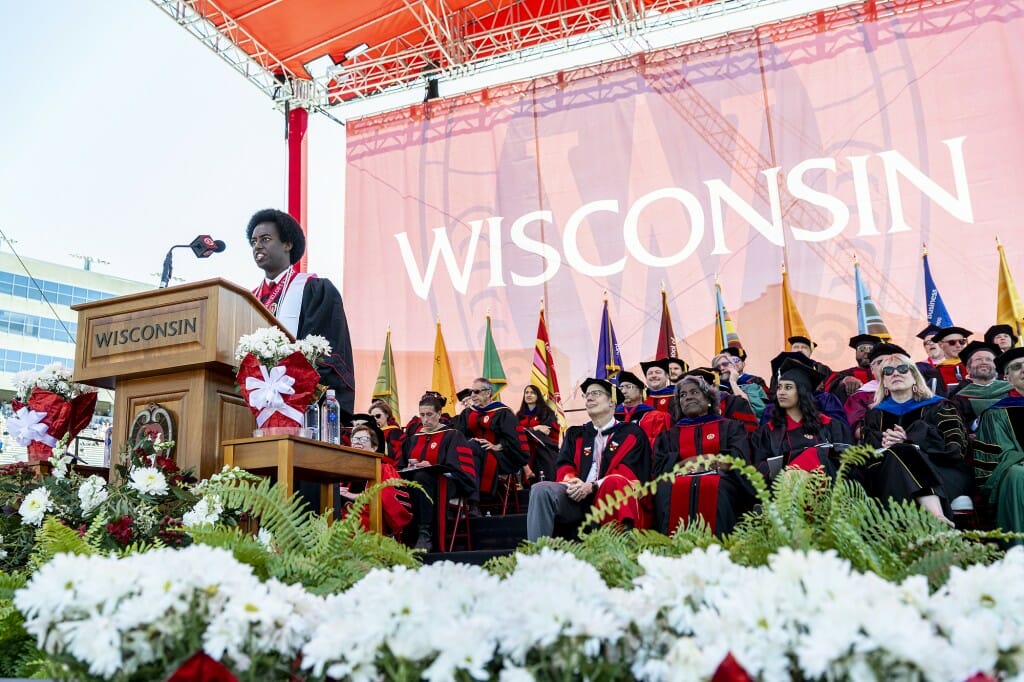 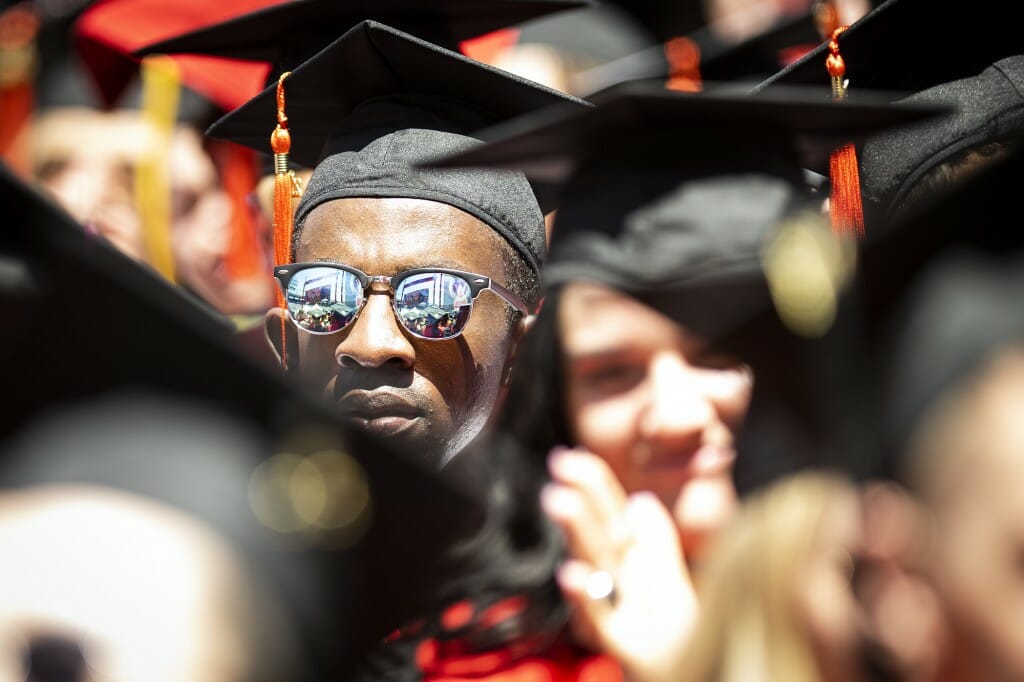 The outdoor graduation was attended by over 7000 bachelor’s, master’s and law students, plus their guests. The total crowd at Camp Randall Stadium was about 42,000. Photo by: Bryce Richter 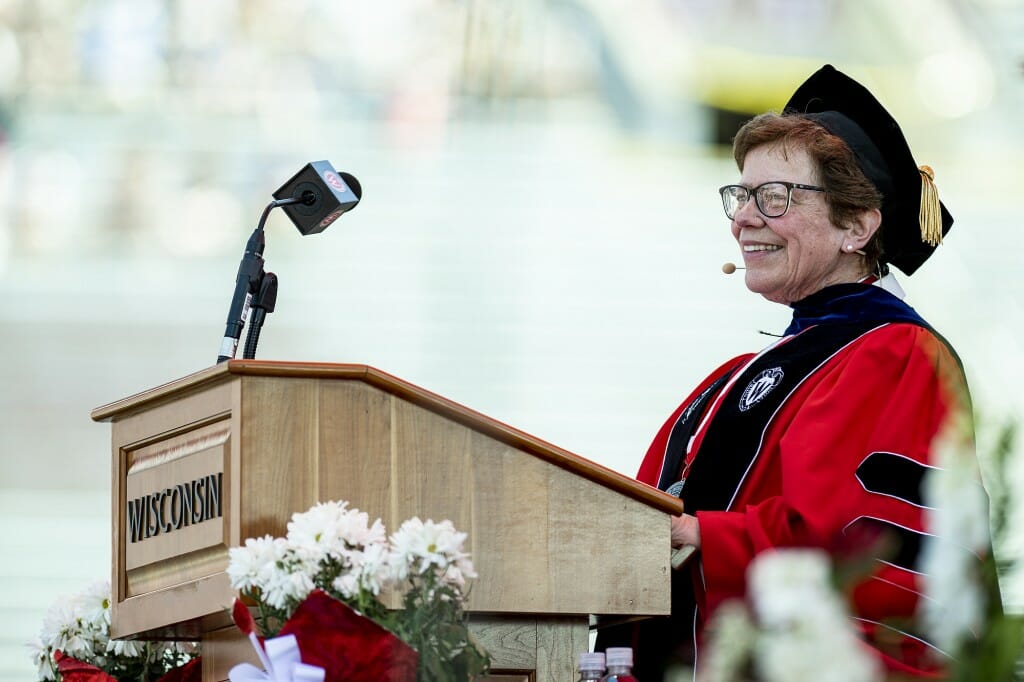 Chancellor Rebecca Blank, who is leaving UW–Madison soon, said students have inspired her with their passion, enthusiasm and curiousity. Photo by: Bryce Richter 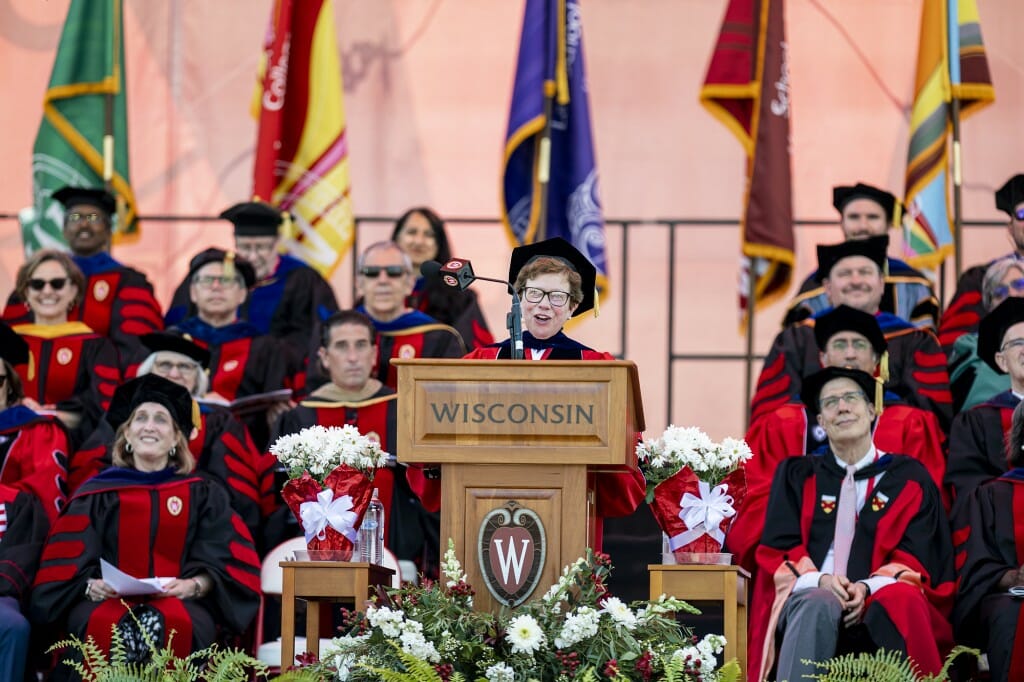 Chancellor Rebecca Blank addresses the graduates and their friends and family. Photo by: Bryce Richter 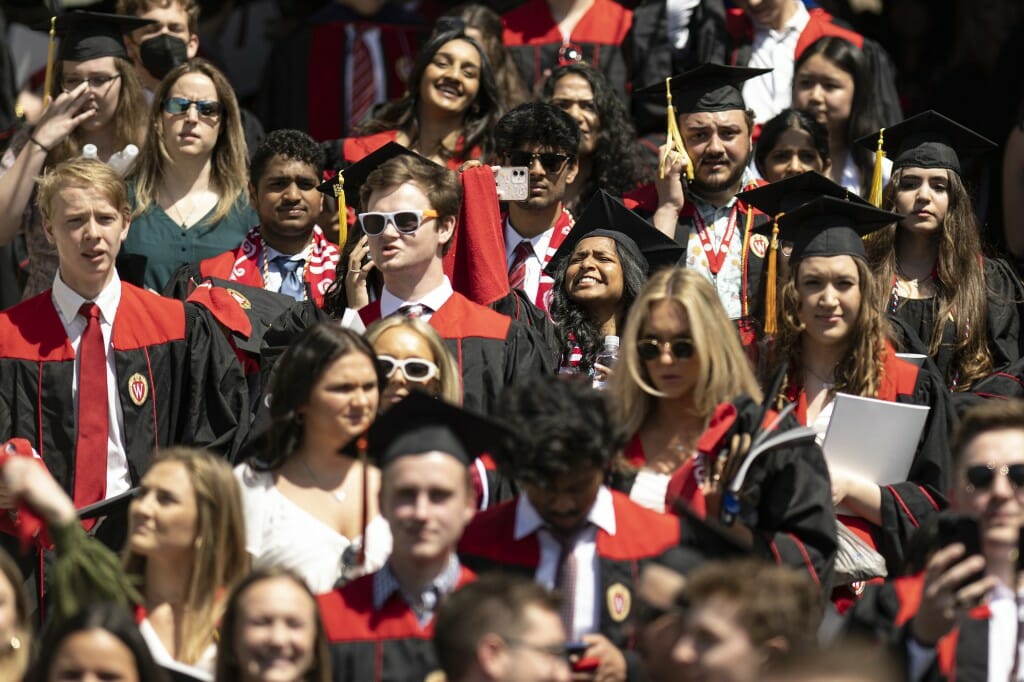 UW graduates capture the moment as they make their way into the stadium. Photo by: Bryce Richter 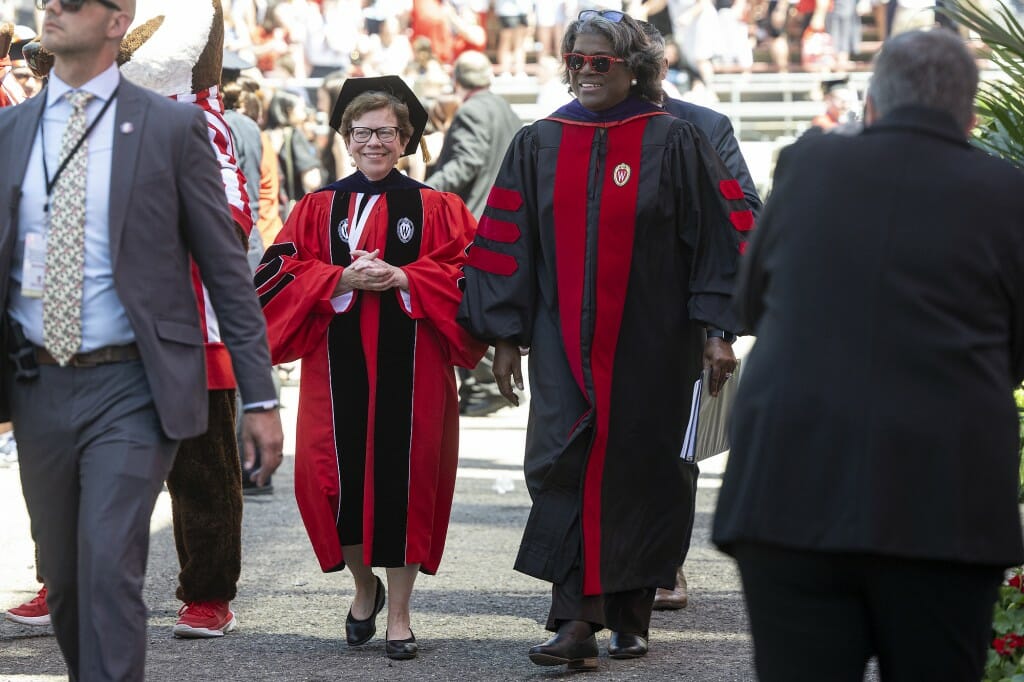 Chancellor Rebecca Blank and Linda Thomas–Greenfield exit the stage during the ceremony. Photo by: Bryce Richter 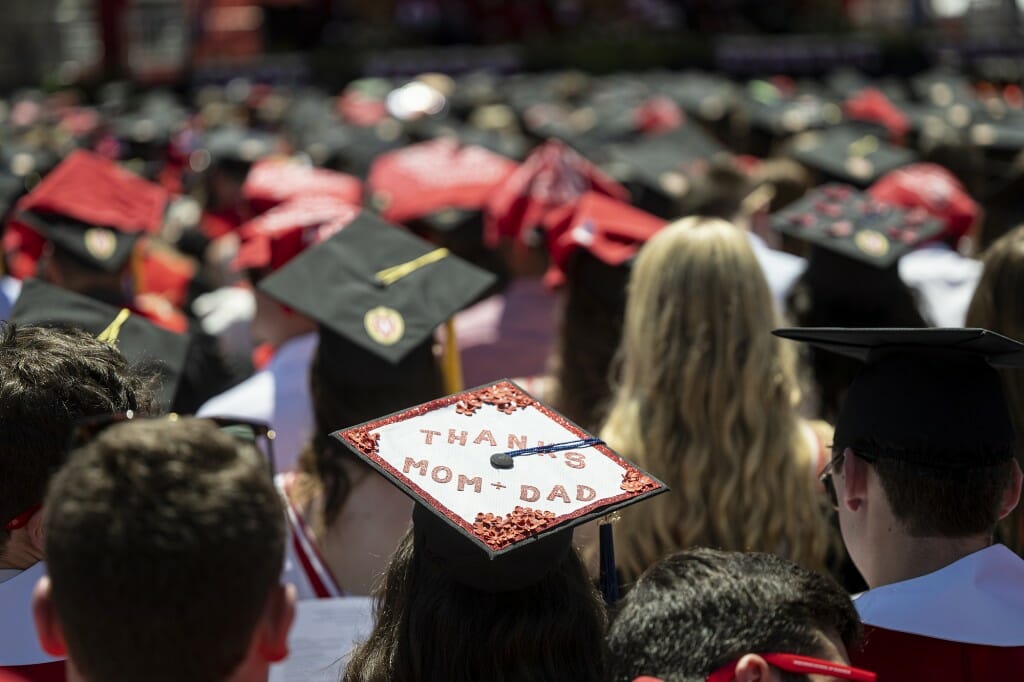 A UW graduate displays a personal message on the top of their graduation cap. Photo by: Bryce Richter 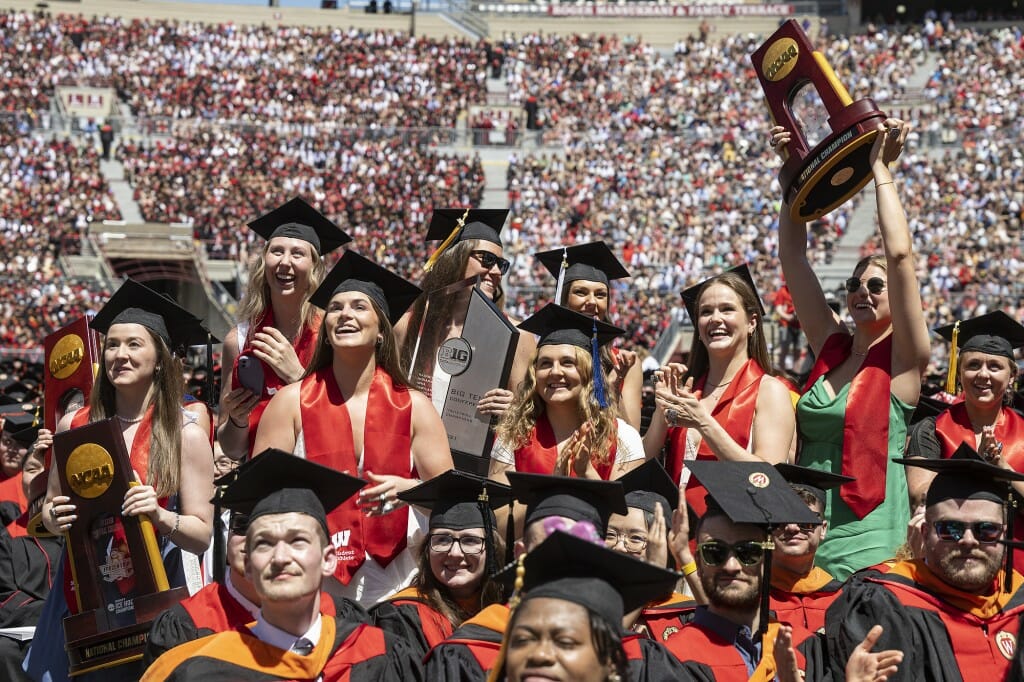 Graduating members of the UW women’s volleyball and hockey teams celebrate with their trophies. Photo by: Bryce Richter 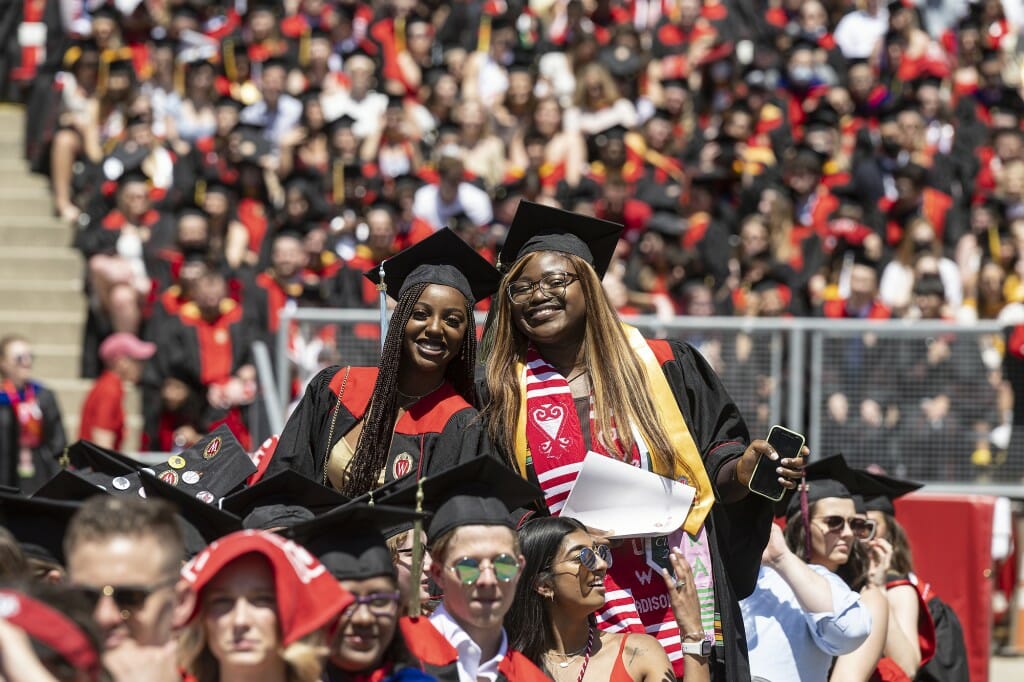 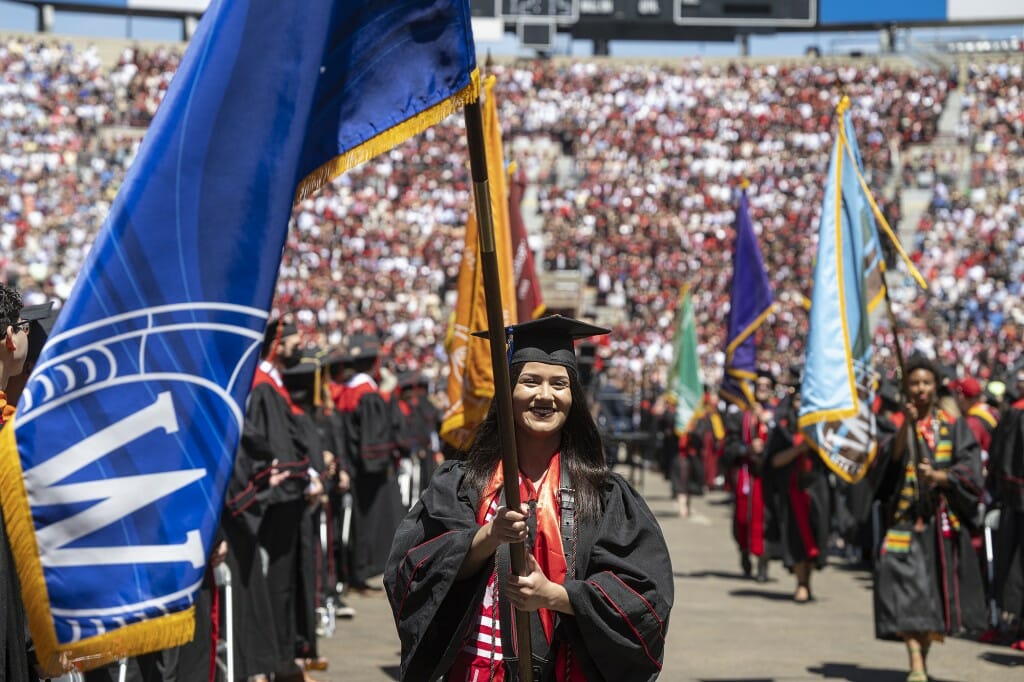 Members of the stage party and flag bearers make their way through the crowd. Photo by: Bryce Richter 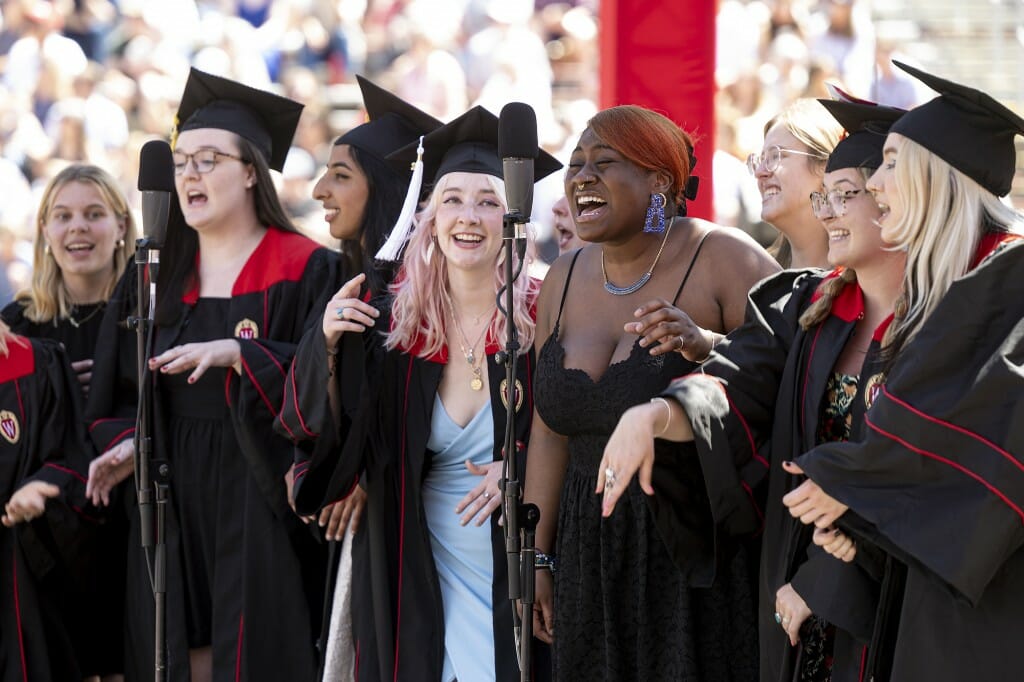 As the U.S. ambassador to the United Nations, Linda Thomas-Greenfield sits at the epicenter of diplomatic efforts to bring peace and democracy to the world.

Saturday, as keynote speaker for the University of Wisconsin–Madison’s 2022 spring commencement, Thomas-Greenfield said her education at UW–Madison helped prepare her for that role. 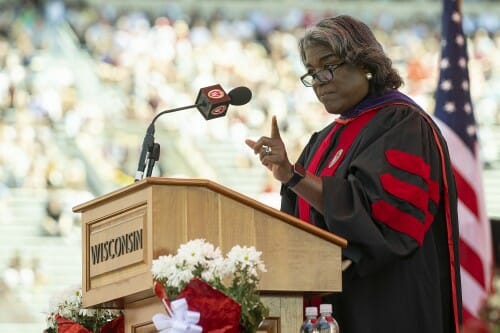 Linda Thomas–Greenfield, Ambassador of the United States to the United Nations and UW alumna, told graduates they should embrace being uncomfortable. Photo: Bryce Richter

“I loved my Wisconsin experience,” she told graduates from the stage of Camp Randall Stadium. “It made me who I am today.”

Thomas-Greenfield earned a master’s degree in 1975 from the Center for the Study of Public Policy and Administration at UW–Madison, the precursor to the La Follette School of Public Affairs. She also did work toward a doctorate at UW–Madison.

An estimated crowd of just over 42,000 people, including graduates, heard Thomas-Greenfield’s remarks at Camp Randall, with many more watching by livestream from around the world.

The ceremony was part of a weekend of commencement festivities. Friday evening at the Kohl Center, diplomas were awarded to doctoral, MFA and medical professional degree candidates. Saturday’s ceremony was for bachelor’s, master’s and law degree candidates. In total, about 7,700 students earned degrees from UW–Madison this spring. 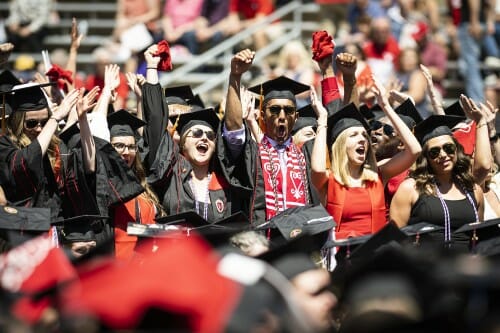 “All of the feelings I’ve had over the past year have really caught up with me today,” said Meghan Breslin, of Park Ridge, Illinois, who missed last year’s spring commencement as an undergraduate because she tested positive for COVID-19 the day before the ceremony.

Watch video of the full ceremony; downloads of ceremony videos for media

This past academic year, she returned to campus and completed an accelerated master’s degree in industrial engineering. This time, she successfully made it to Camp Randall to celebrate.

Saturday marked the first time the flag of the Ho-Chunk Nation flew alongside the U.S. flag and the Wisconsin state flag on commencement stages at UW–Madison. In 2019, UW–Madison dedicated the Our Shared Future heritage marker on Bascom Hill, recognizing the land as the ancestral home of the Ho-Chunk.

Also Saturday, the first full class of Bucky’s Tuition Promise recipients graduated — about 600 students. The groundbreaking initiative, launched four years ago, provides free tuition all four years to any Wisconsin resident who gets accepted to UW–Madison and whose family’s annual household adjusted gross income is $60,000 or less.

“It was definitely stressful in high school not knowing if I’d be able to afford college,” said Tanner Wagner-Durr, of Athens, Wisconsin, a Bucky’s Tuition Promise recipient who triple majored in finance, investment, and banking; information systems; and economics. “It took so much of the worry out of it.”

This was the last Badger commencement for Chancellor Rebecca Blank, who is moving on to the presidency of Northwestern University. 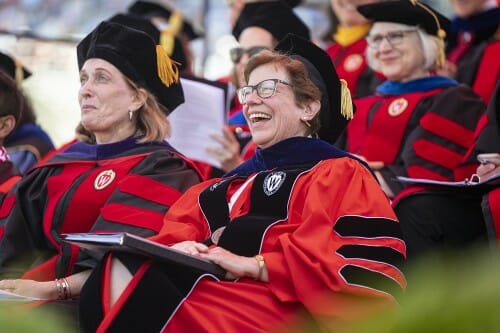 Chancellor Rebecca Blank laughs at the crowd reaction to her being mentioned as an alum of the University of Minnesota during the ceremony. Photo: Bryce Richter

“In my nine years leading this great university, some of my most memorable moments have been with our students,” Blank told graduates Saturday. “You have inspired — and occasionally challenged me — with your passion, enthusiasm, and curiosity. And I’ll admit you’ve given me a good laugh with some of your ‘Becky Blank’ memes.”

“In the past few days, there have been a lot of lasts,” he told his fellow graduates. “The last class. The last test. The last day at The Terrace. The last night out on the town. And I’m not going to lie, it’s a bittersweet feeling. But that feeling means something. It’s a testament to the place this university holds in our hearts.”

For some graduates, a big part of the excitement was getting to hear Thomas-Greenfield, who drew huge cheers whenever her name was announced. Weaving the personal and professional, she described both her own journey in higher education and the momentous state of current events.

“I had no family here, no friends. Most people were white, I was not,” she said. “Instead of my grits and gumbo, you gave me brats and cheese curds. Oh, and yes – Rocky Rococo Pizza at $1 a slice on State Street.”

All that was quite different, she said, and it made her uncomfortable. But she encouraged graduates to embrace that feeling in their lives.

“If you stay comfortable — if you stay in your comfort zone, sticking to what you know — then you are making a bet,” she said. “You are betting that your life, and the world, will stay the same. And let me tell you, you will lose that bet every time.” 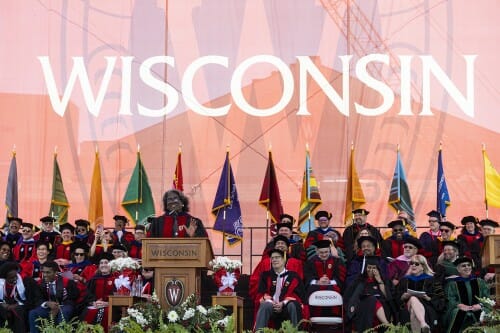 The pandemic showed how quickly life can change, she said, as does the situation in Ukraine.

“One day (the people of Ukraine) were going about their ordinary lives, just like you. The next, they were fighting for their families, for their sovereignty, for their dignity — for their democracy and ours.”

What’s happening in Ukraine is not just about Ukraine — it’s about all of us, Thomas-Greenfield said.

“(It) puts a fine point on just how important it is that we cherish our own hard-won freedoms — and that we take action to protect them, from voting and volunteering to marching and protesting.”

Finally, she asked graduates to remember the most important lesson they learned at UW–Madison.

“More important than any test, any homework assignment, any class at all. That lesson: Be Kind. That two-word mantra has guided me my entire career.”

Graduate Taobo Wang of Beijing listened to Thomas-Greenfield while wearing a commencement cap adorned with an image of the state Capitol that he painted himself. He fell in love with the city during his time on campus, he said, and spent many hours hanging out on the Capitol Square.

He earned a double-major in chemistry and chemical engineering Saturday and is now off to Harvard University for a Ph.D.

But Madison? It will live with him forever, he said.

“I’ll keep this cap my entire life as a reminder of all the great memories I made here.”

Box Link all the videos for the media: