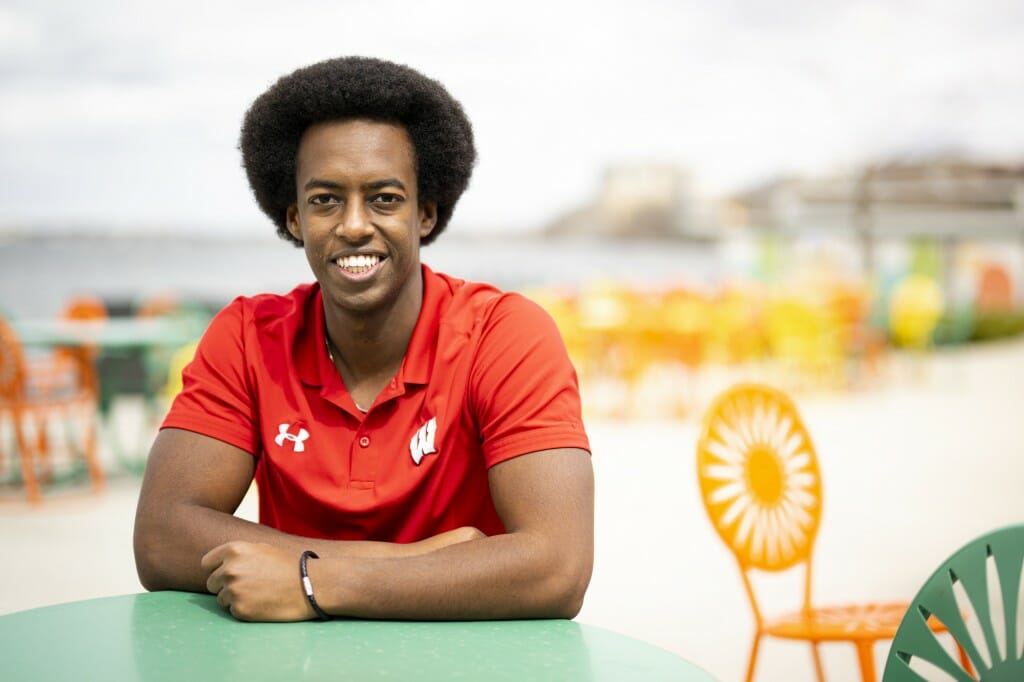 Barni Shiferaw was running down Bascom Hill in just his underwear the other day when the thought occurred to him: This is yet another memorable experience I could not have had anywhere else.

Shiferaw counts himself fortunate for having had many wonderful opportunities at UW–Madison. (More on the Undie Run in a moment.) As he completes his undergraduate career, he gets to add one more: student commencement speaker.

Shiferaw, who serves as vice president of the senior class, will offer remarks on behalf of his fellow graduates at spring commencement May 14 at Camp Randall. The crowd typically numbers around 45,000.

“Right now, I’m more excited than nervous,” he says. “I’ve loved UW ever since I came to campus, and I’ve had an incredible experience here, so it will be fun to reflect on that and to hopefully inspire the other graduates.”

Shiferaw, who is earning a bachelor’s degree in biology, grew up in Wausau, Wisconsin. His final year at Wausau West High School was notable for a rare two-sport feat — he simultaneously played on the soccer team while kicking for the football team, often juggling three games a week. Meanwhile, his strong focus on academics led to a full-tuition Mercile J. Lee Scholarship at UW–Madison. He served as co-chair of his cohort of scholarship recipients.

While playing soccer in middle school, Shiferaw met Pranav Srivastava. The two became best friends, enrolled at UW–Madison at the same time, and campaigned for senior class leadership positions on the same ticket. Srivastava is the senior class president and will be providing the welcome at commencement.

“I’ve loved UW ever since I came to campus, and I’ve had an incredible experience here, so it will be fun to reflect on that and to hopefully inspire the other graduates.”Barni Shiferaw

Presaging their college leadership roles, they were elected president (Srivastava) and vice president (Shiferaw) of the National Honor Society chapter at Wausau West their senior year. Srivastava praises his friend as a relentlessly hard worker and says they make a good team.

“I tend to come up with fantastically random and perfectly ridiculous ideas, and Barni is stellar at executing a vision,” Srivastava says.

“He’s a wild thinker, and I like to get things done,” Shiferaw says, adding that they work well together because they both take their studies seriously but also have a pronounced playful side.

That’s how the Undie Run came about. As senior class officers, they vowed to resurrect the Pail & Shovel Party, known historically for its campus pranks and entertaining antics. In early April, the newly revived party sponsored the Pail & Shovel Undie Run to aid unhoused people in the Madison area — participants donated their clothes to St. Vincent de Paul, a community organization dedicated to helping those in need.

The run was straightforward — a dash from the top of Bascom Hill to the bottom. The 75 runners donated more than 500 clothing items.

“Although the video shows someone else in the early lead, in incredible fashion, Pranav and I tied for first place in a photo-finish ending,” Shiferaw says. “It was unreal, almost suspicious.”

The Senior Class Office, led by the Pail & Shovel party, is raising money through the 2022 Senior Class Gift to benefit the Green Fund. The fund supports student-initiated projects that address the environmental footprint, social impact, and operating costs of campus facilities.

Shiferaw has given back to the community in many other ways as a Badger. For most of his time on campus, he maintained a strong affiliation with Bucky’s Classroom, a program that sends UW students to middle schools across the state to talk about college preparation and career exploration. Shiferaw served as a student ambassador his sophomore year, then moved into leadership positions the last two years. His focus on reaching young students traditionally underrepresented in higher education helped the program expand into schools it previously hadn’t served. He also helped recruit a more diverse roster of UW student ambassadors.

“Young people need to see people in leadership roles that look like them,” Shiferaw says. “That’s why the diversity piece was so important to me.”

Shiferaw also volunteered with underserved patients at Wingra Family Medical Center in Madison as a health coach, later serving as the health coach coordinator. The role provided Shiferaw with practical experience as he prepares to enter medical school this fall.

Shiferaw recently returned from a trip to Ethiopia, his first visit to the country where he was born. He was 1 year old when his parents immigrated to the U.S. with him and his three older brothers.

“It was important to know where I came from and to understand my parents’ journey, rather than just hear about it from them,” he says. “It was very powerful.”

He expects many members of his extended family in Ethiopia to be streaming live as he delivers his commencement address.