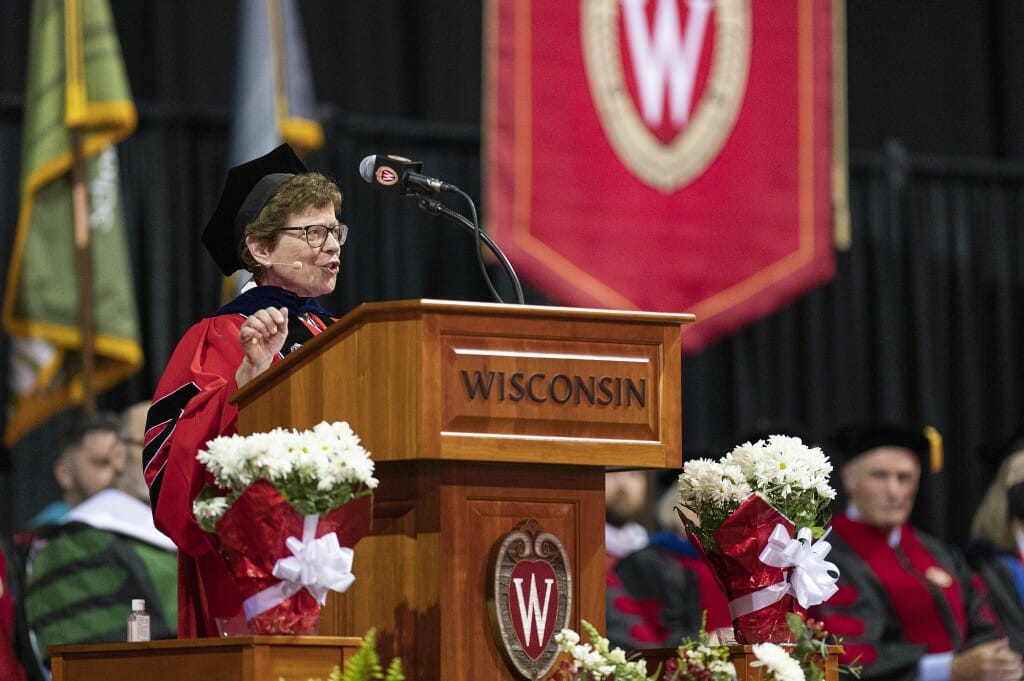 Rebecca Blank, who is leaving UW–Madison May 31 after nine years as chancellor, addresses the audience in the Kohl Center. Photo: Althea Dotzour

Among the more than 800 doctoral, MFA and medical professional students attending commencement on Friday, Laura Livingston was celebrating with her husband, Kirby, in the Kohl Center — and the rest of the family on the livestream.

A doctoral graduate in environment and resources, Livingston pivoted from agroecological research to community engagement when a position at the Morgridge Center for Public Service turned into an opportunity to help others find ways to serve their communities.

This summer, Livingston will start as director of sustainable agriculture in a tenure-track position in Pittsburgh, combining her passion for agricultural research with her newfound love of public service.

“I was able to gain so many experiences and so many skills that prepared me for this next opportunity,” Livingston says. “UW gave me a lot of different ways to grow as a person.”

In her commencement speech, Chancellor Rebecca Blank celebrated Livingston’s work as an example of the community-focused work she entreated all graduates to strive for.

“I hope you’ve experienced the value of our longtime commitment to solving problems out in the world — what we call the Wisconsin Idea. That commitment to using our knowledge to serve others has driven five generations of discovery and innovation on this campus,” Blank told the graduates.

Acknowledging the immense toll the pandemic has taken on everyone at the ceremony, Blank also shared how the trying circumstances forced new ways of thinking and living — new patterns that might be worth keeping.

“None of us would ever wish for a pandemic,” Blank said. “But I hope that living differently in the last two years has given you some new insight into how you want to spend your time.”

UW System Regent Mike Jones, an alumnus of UW–Madison and attorney in Milwaukee, announced that the Board of Regents has named Blank chancellor emeritus for her contributions to the university. He also encouraged the graduates to weave their own ambitions together with service to their community.

“Each of you has your own unique story to tell — but we all share in a proud UW tradition that binds us together. And that is seeing a need in the world around us, and then working to find a solution. UW–Madison has always believed — as I do — that we should benefit and learn from the past, and think and train for the future,” he said.

“None of us would ever wish for a pandemic,” Chancellor Rebecca Blank said. “But I hope that living differently in the last two years has given you some new insight into how you want to spend your time.”

That commitment to others inspired medical student Trevor Cooper, who was at the ceremony with his mother, father and three grandmothers. A native of Ixonia, Wisconsin, Cooper trained with the Wisconsin Academy for Rural Medicine program, which prepares medical students to practice medicine in rural Wisconsin communities.

“I would recommend that program to anyone who knows they want to practice in the rural environment,” he said. “It’s one of the reasons I know I want to come back to Wisconsin.”

But first, Cooper will be traveling to Asheville, North Carolina, to continue his training in obstetrics and gynecology (and be closer to his twin brother, who lives in Georgia). Like many medical students, Cooper changed his mind a few times about what kind of medicine he wanted to practice. Partway through his OB-GYN rotation, it hit him.

“I got to help deliver one of the nurses I worked with on a prior rotation. It was one of those moments where time stood still, and I realized this is what I want to do as a career,” said Cooper, who also graduated with a bachelor’s degree from UW–Madison in 2015, the first in his family to graduate from college. 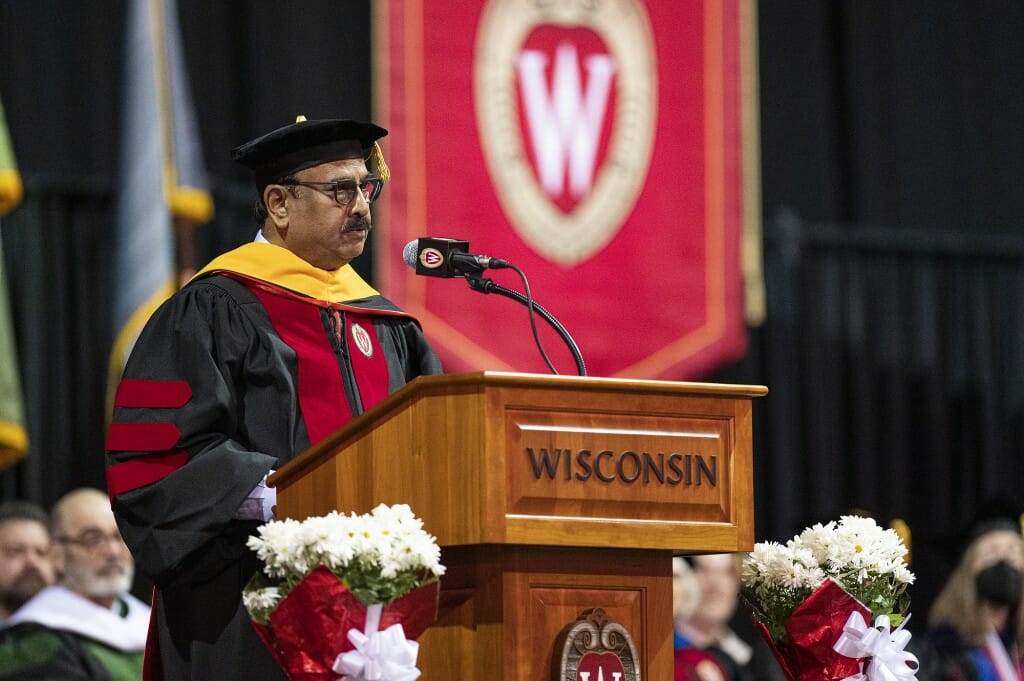 Ella earned his PhD in plant pathology from UW–Madison in 1993. With his wife, Suchitra, he founded Bharat Biotech in his native India in 1996. The company has delivered over 10 billion low-cost vaccine doses against many diseases in over 123 developing countries.

“We need to have the world act as one,” Ella said. “Your knowledge and skills must be used to solve society’s problems.”

Grant is the president of the American Nurses Association, representing America’s 4 million registered nurses. He is the first male president and the first African American male to hold this position. Grant is also an esteemed burn expert who has been recognized for his tireless work treating victims of the 9/11 attack on the World Trade Center. 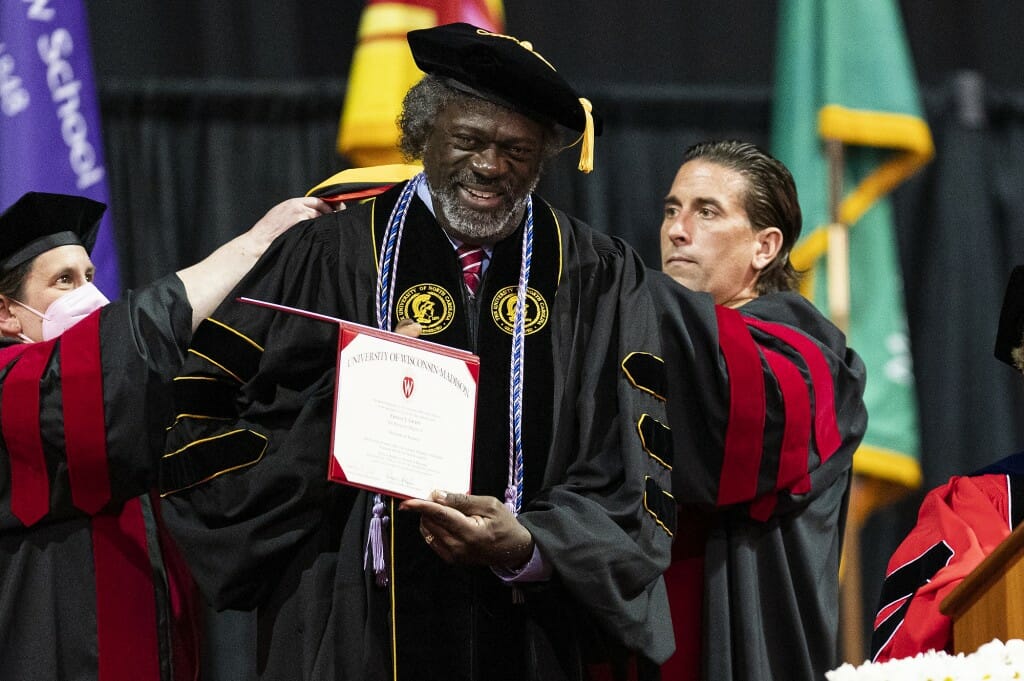 Grant shared his vision for a diverse health care profession best equipped to help the patients they serve and asked the graduates to reflect on their transition from students to leaders.

“Today is both a beginning and an end in life’s many passages. Your commencement formally signals the completion of your studies, which simultaneously marks a turning point — a time of transition in your own leadership journey,” he said. “Take pride in this achievement and make the most of this valuable education.”

The former CEO of Milwaukee-based Rockwell Automation, Nosbusch earned his bachelor’s degree in electrical and computer engineering from UW–Madison in 1974. During his decades-long career at Rockwell, Nosbusch oversaw the company’s expansion into more than 80 countries. He has been recognized for his vision in adopting cutting-edge technology to drive more sophisticated smart manufacturing. 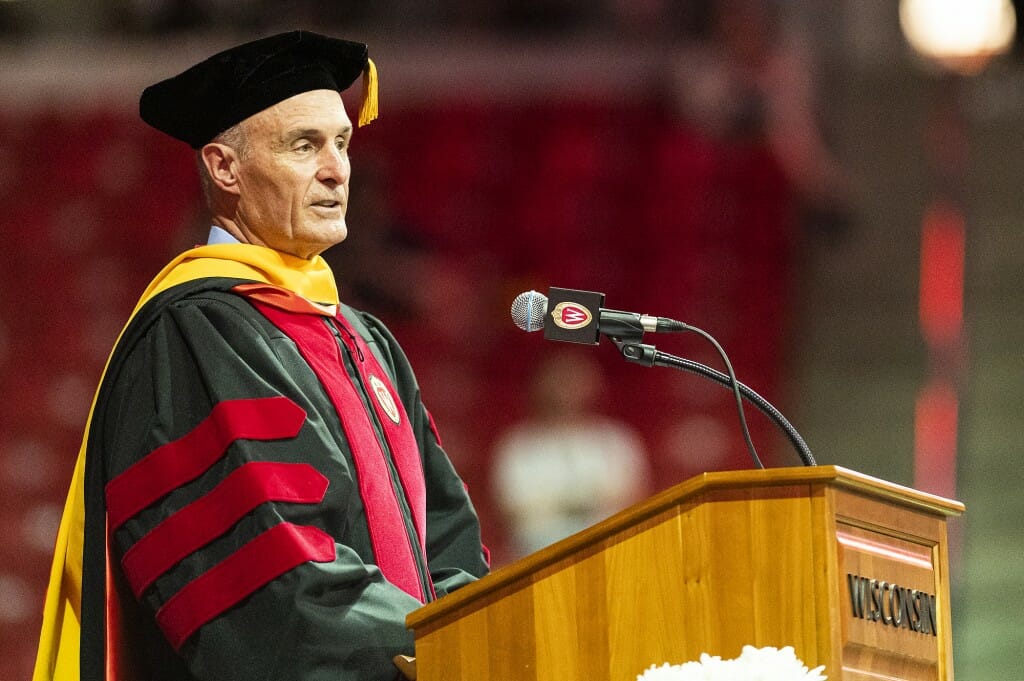 Keith Nosbusch, UW–Madison alum and chairman of the board and CEO of Milwaukee-based Rockwell Automation, speaks after receiving an honorary degree. Photo: Althea Dotzour

Nobusch told the graduates that the only constant they are likely to face in their world and careers is change. How they face that change, he said, would make all the difference.

“I imagine that your many years of formal education have helped you become reflective individuals — that is, people who regularly take the time to formally reflect on their values, attitudes and performance,” he said. “As you move on to new opportunities and responsibilities, I strongly encourage you to maintain this habit of self-reflection, including as it relates to your attitudes about change and your skills as an effective leader.”

Welcomed to the stage to receive their diplomas, the graduates celebrated a special moment — a May ceremony in person, surrounded by countless loved ones, for the first time in years.

For medical student and double alumnus Cooper, with eight years of UW–Madison education behind him, it was a surreal moment to see his longtime plans come to fruition.

“Now being at the end of this process makes it all worth it,” he said. “Especially with the support from my family.”