Spring commencement 2020: A virtual party heard round the world

Camp Randall wasn’t in the cards for commencement this spring, but University of Wisconsin–Madison graduates did get “Camp Patterson” — bestselling author James Patterson’s kitchen, impressively festooned with all manner of Bucky paraphernalia.

“And I thought my dad had a lot of Badger stuff!” marveled graduate Amelia Gonzales, a Patterson super-fan who had been eagerly anticipating the famous writer’s keynote address.

Forced online like the rest of us due to the coronavirus pandemic, Patterson offered his remarks by video, part of a virtual commencement ceremony that became available on the UW–Madison homepage shortly after 12 p.m. on May 9. Viewing parties ensued around the globe.

“It helped me feel that UW energy and Badger pride that I had been missing,” says Bridget Garnier, who watched the ceremony with her husband and two young daughters in Costa Rica. She earned a doctorate in geoscience from UW–Madison Saturday. 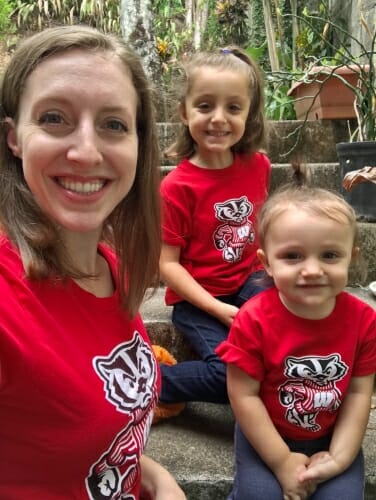 Originally from Racine, Wisconsin, Garnier began her Ph.D. studies in 2014 and completed the last three years from Costa Rica (her husband’s home country), with occasional field and lab trips to Guatemala and the U.S. She defended her dissertation on Zoom.

“It was great, actually, because I was able to share my work with those who wouldn’t have been able to come to an in-person defense,” she says.

Runyi Wang, who earned a bachelor’s degree in elementary education, watched the ceremony alone at 1 a.m. in a hotel room in Shenyang, China — the final night of her two-week, government-required quarantine after returning to her hometown.

Despite the circumstances, she remained remarkably upbeat. 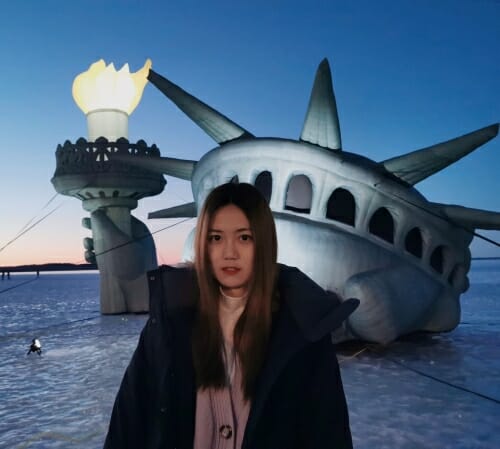 “I think I’m a naturally optimistic person,” she wrote in an email. “Although it’s a pity I could not get a complete graduation ceremony because of COVID-19, I will still accept this irreversible fact.”

Her family and friends joined her on a video chat after the ceremony.

Alyssa Birkeland, vice president of the senior class, kicked off the virtual ceremony by acknowledging that the final semester was more bitter than sweet. Students were sent home in mid-March when all instruction moved online. That meant no May sunshine on the Terrace, no graduation photos with Abe. Still, there is a lot to celebrate, said Lauren Sorensen, class president.

“College is not easy, and our achievements that got us here today deserve the highest recognition and praise,” she said.

Patterson, considered the most successful author today of adult fiction, began by assuring graduates he had the bona fides to be their commencement speaker. Though he didn’t attend UW–Madison, he joked that he had to sign a “Badger prenup” before marrying his wife, Sue, an alumna. He said he eats brats for Thanksgiving and has a customer loyalty card from Mickies Dairy Bar.

“I refuse to talk to anyone who attended Michigan or even roots for Michigan, and that includes one of my sisters,” he said.

Patterson counseled graduates on persistence and resilience, telling them, “Hey, it’s hard now, but it’s been hard before. When I graduated from college, the war in Vietnam was raging, there was a draft . . . When my dad graduated, he got shipped off to Europe and WW II.”

Patterson didn’t sugarcoat the tough job market but said there is hopeful news.

“You have all received a superior education here — not in my kitchen, at Wisconsin,” he said. “There’s never been a better time to make use of everything you learned in school. You are prepared for this. You are ready. You are the best and you are the brightest. Go you beautiful Badgers.”

He ended by blowing a kiss.

Gonzales, who earned a master’s degree in social work Saturday, said she found Patterson’s remarks touching and inspiring. She’s read almost all his books — no small feat; he’s had 96 No. 1 titles on the New York Times bestsellers list. She was particularly moved by an intensely personal story Patterson shared about love and loss and the need to live in the moment. 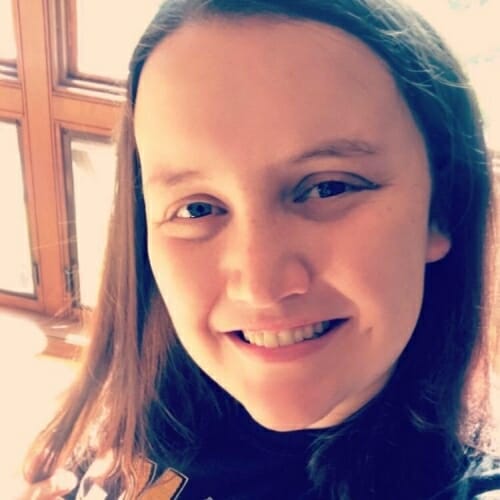 Decades ago, Patterson said his girlfriend at the time, just 34, collapsed from an inoperable brain tumor and was given one year to live. That year became “incredibly precious,” Patterson said.

“When James said that, it really resonated with me because it is so, so true,” says Gonzales, of Madison, who endured the death of a grandmother last year.

Chancellor Rebecca Blank praised graduates for the way they handled their unprecedented final semester, and she thanked their family and friends for helping them through it all.

Some graduates will face a longer job search than expected, Blank said. Others will face personal pain from unexpected family loss or will end up doing very different things next year than they might have expected.

“But when we are past this crisis, you will also see many new opportunities — opportunities to re-engage the economy, to re-build personal connections, and to figure out how to live together in ways that reduce the threat of future pandemics,” Blank said. “Our world will change permanently because of this global shared experience. Your diploma from this great public university is your ticket to be part of that change.”

To ease the sting of the last few months, the Wisconsin Union announced it would provide all graduates with lifetime memberships — a first in the association’s more than 110-year history. Nearly 4,000 graduates already have claimed the gift. Additionally, the Wisconsin Alumni Association is giving graduates two free years of membership.

While much was different about this year’s commencement ceremony, some constants remained, like the personal stories — of mountains scaled, of challenges overcome, of endings that once seemed improbable.

“I honestly never thought I’d get here,” says Laura Yin, of Madison, who earned a bachelor’s degree in mechanical engineering. 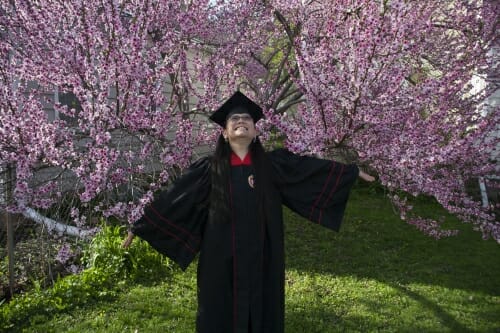 Adopted from a Taiwanese orphanage and brought to the U.S. as a toddler, Yin, 36, says she toiled for more than a decade in low-paying jobs after high school, including nearly five years as the only female mechanic at an industrial laundry facility. She dreamed of becoming an engineer and made it happen by first earning an associate’s degree at Madison College and then transferring to UW–Madison.

She celebrated Saturday with her parents and partner.

“I’m feeling so many emotions,” Yin says. “I’ve wanted this for so long and I’ve worked so hard for it. It still hasn’t sunk in.”