Message to grads: “You don’t have to do this alone” 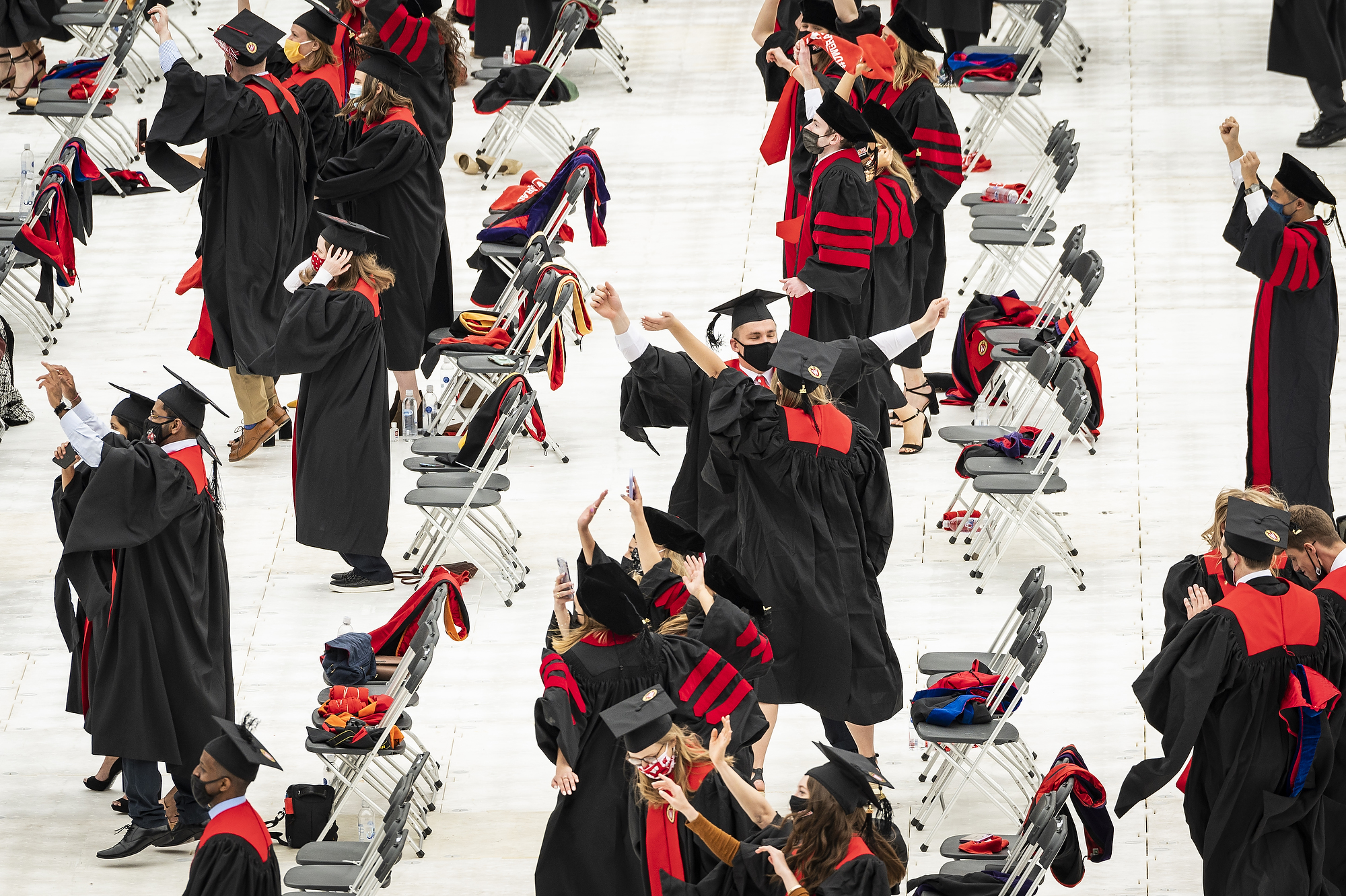 Renowned psychologist John Gottman had three messages for the graduate degree candidates assembled at Camp Randall Stadium on Saturday, for an in-person and physically distanced commencement during a year marked by the COVID-19 pandemic.

The first, from the UW alumnus considered a pioneer in the psychology of relationships: “Follow your heart — undertake what’s most meaningful for you.”

For Ninah Divine, receiving her doctor of medicine degree, and her husband Lorenzo Gudino, graduating with a doctor of law degree, their years at the University of Wisconsin–Madison represented just that.

After graduating from Madison’s East High School in 2012, Divine pursued her bachelor’s degree in Chicago and then, chose to return to her hometown for medical school. 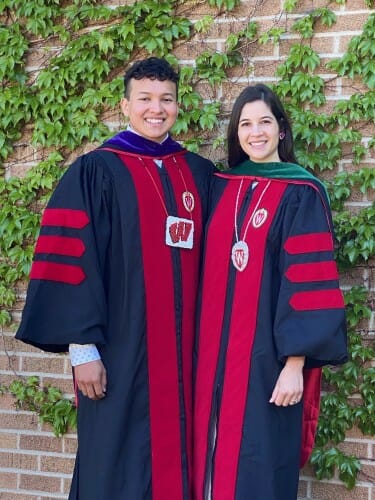 “I came here for medical school because I wanted to be part of the Native American Center for Health Professions,” says Divine, who identifies as mixed race and a descendent of the Cherokee Nation. “I want to provide better care for Native communities, and I wanted to be able to do tribal clinic rotations.”

After navigating the trials and tribulations of being a medical student during a pandemic, serving on a health equity task force within the School of Medicine and Public Health, and, yes, completing rotations in places like the Menominee Tribal Clinic and the Ho-Chunk House of Wellness, Divine will next complete a residency in family medicine at the University of Minnesota.

For Gudino, coming to UW–Madison was also about following his heart and finding community. He met great Indigenous faculty, students, staff and community members in Madison and across the state even before starting his program, recalling the first time he sat on drum at the Wunk Sheek house on campus.

“I feel really fortunate to have been able meet all these great people here, across many fields and capacities, knowledge bases and tribes. I’ve really felt that support,” he says.

Gudino, who is Fort Sill Chiricahua Warm Springs Apache, served as co-president of the UW–Madison Indigenous Law Students Association and is vice president of the National Native American Law Student Association. He helped the UW Multicultural Student Center find its new director. Now, he’s going on to his dream job as an associate practicing Indian law at Hogen Adams in St. Paul.

“It’s a dream come true for me, for me to practice my passion right away,” Gudino says.

Message two from Gottman, who received an honorary doctorate at the spring ceremony complementing the doctorate in clinical psychology he earned from UW–Madison in 1971: “Don’t be afraid to tackle hard things, even if they seem impossible at first.”

It “enforced the importance of observing emotion at a time when the field was captivated by behaviorism,” Gottman told the graduates in a video he shot from his home in Seattle; it also featured his wife and professional partner, Julie Schwartz Gottman. 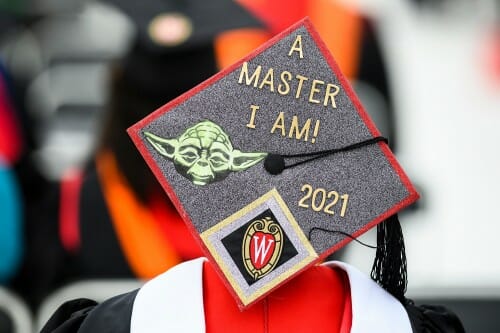 Yoda would be proud of this graduate. Photo: Jeff Miller

Chancellor Rebecca Blank highlighted the many ways in which students have tackled hard things, as COVID-19 altered the way they worked, interacted and learned.

She mentioned Sarah Alexander, a Ph.D. student in civil and environmental engineering who worked with partners in Ethiopia to help farmers grapple with the impacts of climate change.

“Without the ability to travel to Ethiopia for in-person workshops, Sarah and her partners worked with people in the community who brought farmers together outdoors and held a megaphone up to a cellphone,” Blank said.

Alexander’s experience paralleled Gottman’s third message to graduates: “You don’t have to do this alone. Team up with the people you trust most.”

At UW–Madison, he cemented the science of studying relationships and their import, and went on to establish a career in tandem with some of his best friends, including of course, Julie, “a woman my mother said was the only good choice I ever made in my life, and my mother was not wrong,” Gottman quipped.

“We’ve actually developed the only couples therapy in the world that is based on what effective couples actually do to make their relationships work,” he told the graduates. But, he added: “There is still a lot to understand — how do you help couples get over and end domestic violence; end addiction; survive an affair; survive major depression, anxiety, or past traumas? We’re still studying that in my lab in Seattle. It’s still a work in progress.”

And that, perhaps, served as the undertone for Saturday’s commencement, in a year that could at times feel lonely.

“COVID has taken so much from so many,” Chancellor Blank said. “But it has also taught us something valuable, which is easy to lose sight of in graduate school: How to think like a beginner.”

She continued: “The great cellist YoYo Ma credits his remarkable ability to connect with audiences to his beginner’s mind, which he describes as: ‘Being receptive to what’s around you and being present without judgement.’ ”

And so, the graduates of 2021 did, even as the last year of their graduate school experience saw a convergence in crises, from the pandemic to a new level of urgency to take meaningful action against racism and injustice, following the death of George Floyd and ongoing attacks on people of Asian descent.

Blank asked those graduates who were able to stand as she recognized them for the many ways they rose to meet new challenges, from teaching undergraduate classes in person to balancing their own education while taking care of children learning at home or without  child care.

Among these students was doctor of veterinary medicine degree recipient Stephanie Rinehart, whose two-and-a-half-year-old son Huxton was able to join her on the field.

“I am a single mom so this is a really big deal for me,” said Rinehart, who specialized in large animal medicine. “Being able to be here means so much. I didn’t think it was possible.”

Degrees were conferred to 1,266 master’s degree students and 871 doctoral candidates. In all, 1,395 graduate and professional students, faculty and staff attended the ceremony, which followed an in-person undergraduate commencement ceremony at Camp Randall Saturday. It also featured remarks from University of Wisconsin Regent Scott Beightol, who, invoking Albert Einstein implored graduates to continue to be truth seekers.

Because of the ongoing pandemic, graduates were unable to bring guests. Family members, friends and graduates unable to attend could watch a livestream of the ceremonies from their homes or at several locations on campus.

In the stadium, graduates, faculty and staff in attendance were required to adhere to health and safety protocols, including physical distancing, wearing face coverings, and providing evidence of a recent negative COVID-19 test or full vaccination.

“My parents are at my apartment and we are going for dinner after,” said master of engineering student Jonathan Salomon. “It’s nice to have a little normal back.” 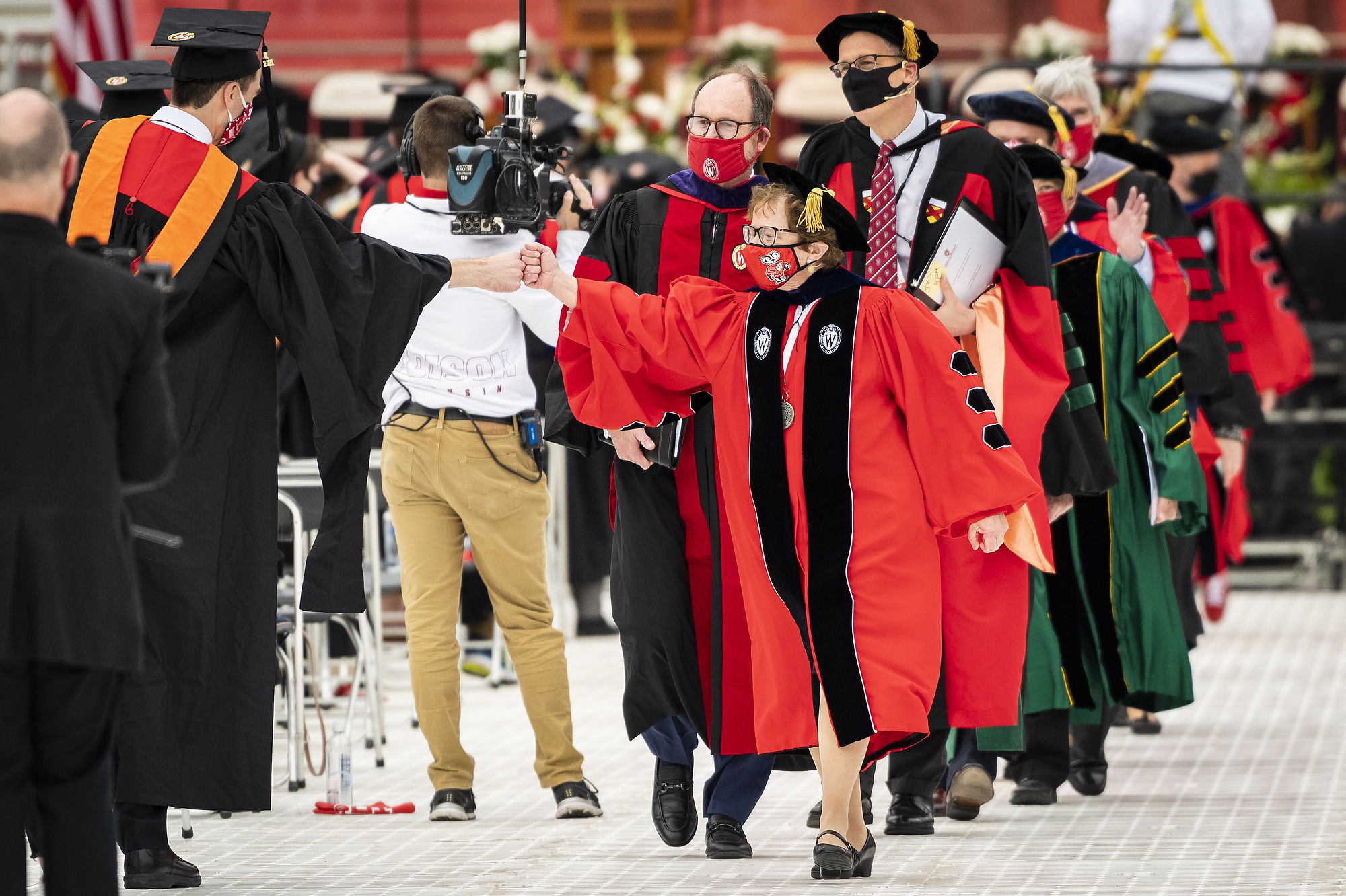