Every startup should have an origin story. Apple and its essential garage. The Wright brothers: two bicycle mechanics who invented one incredible flying machine.

The genesis of the nontoxic Buckthorn Baggie starts with trees that refused to die. The common buckthorn, one of the most troublesome invasive trees in the Midwest, forms a dense thicket that crowds out native plants. Cut to the ground, it springs back, Hydra-like, with up to a dozen eager offshoots that form an equally appalling forest monoculture.

Herbicide kills buckthorn, as does uprooting. But many people disdain herbicide, and uprooting fails on trees above an inch or so in diameter. 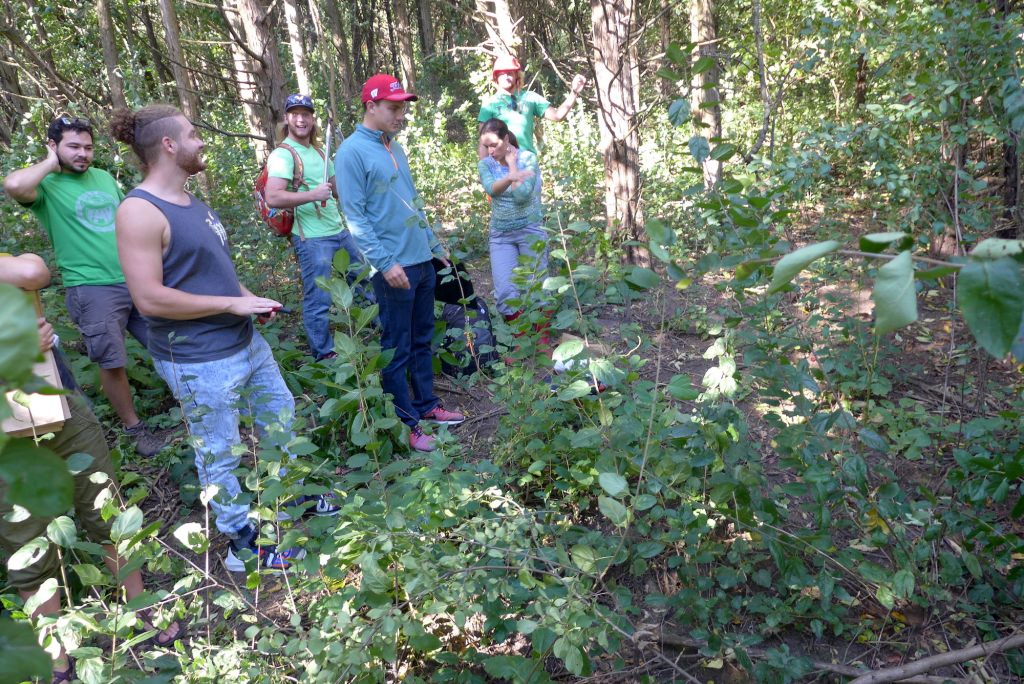 Enter Buckthorn Baggies, an invention that University of Wisconsin–Madison engineering senior Matthew Hamilton cooked up as a high school student in Woodbury, Minnesota.

The problem was simple: Buckthorn kept resprouting after Hamilton cut it back in his backyard.

The solution was equally simple: a heavy, black plastic bag to cover the stump that was held in place by a cable tie. Within a few months, this patent-pending cure would annihilate the weed tree once and for all.

The Baggie deprives buckthorn of light, preventing those nasty resprouts with neither chemicals nor heavy lifting.

So, as Hamilton enrolled at UW–Madison and worked toward a bachelor’s degree in mechanical engineering, he was also perfecting the Buckthorn Baggie and starting his business. “I’ve done this from the beginning to the end, and saw the entire process of getting the product ready to market,” he says. “You think you can just come up with something and put it on the web and sell it, but I realized there was a lot more to it than I expected.”

For example, since the bags need to remain in place for months, they needed a sticker to distinguish them from trash. But the stickers peeled right off, so he had to find a coating that improved adhesion.

Invasive species are increasingly recognized as a major cause of environmental upheaval, and their removal is generally a key to ecological restoration. In the Midwest, common buckthorn is one of the worst invaders. The tree, apparently introduced to North America as an ornamental more than a century ago, quickly grows in a variety of habitats to 40 feet tall, with all the characteristics of an invasive nuisance. It tolerates the intense shade it creates. Its dense foliage emerges very early in spring, and lasts late into the fall, so it stunts the competition through sunlight deprivation.

And when cut back to the stump, buckthorn produces half a dozen or more new stems. Far from solving the problem, cutting exacerbates it by leaving a phenomenally dense thicket.

Although the stump can be killed by dabbing it with herbicide, many volunteer projects — and volunteers themselves — either cannot or will not use herbicide. And that’s a market opening for the Buckthorn Baggie.

In the middle of October, the Baggies are solving that problem in a UW–Madison forest ecology class taught by Phil Townsend. The students are learning to measure tree biomass — an essential part of understanding the trees’ role in the environment, the carbon cycle and global warming.

After past classes cut buckthorn from a section of Picnic Point, resprouts ran rampant. “It was frustrating for me,” says instructor Autumn Sabo. “We knew that after we cut them down, they would resprout with a vengeance. I complained to Alex (Brito, the class teaching assistant), and he found the Buckthorn Baggies.”

Sabo learned that the inventor was on campus, so Hamilton was invited to demonstrate how to place and secure the bags to deprive the stump of essential sunlight.

Hamilton says sales have already justified a reorder of bags. More broadly, “being in the bag business reassured me that I wanted to be in mechanical engineering, but was also interested in the sales side of things. It’s been a good experience.”