Breeding highly productive corn has reduced its ability to adapt

Stuck where they are, plants have to adapt to their environments, responding to stresses like drought or pests by changing how they grow.

On a broader scale, crop breeders need to be able to develop new varieties that are adapted to a new location or changing growing conditions in the same area. 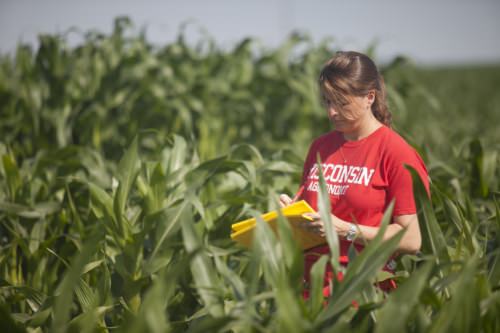 Researchers at the University of Wisconsin–Madison wanted to know whether the last 100 years of selecting for corn that is acclimated to particular locations has changed its ability to adapt to new or stressful environments. By measuring populations of corn plants planted across North America, they could test how the corn genomes responded to different growing conditions. Writing Nov. 7 in Nature Communications, UW–Madison Professor of Agronomy Natalia de Leon, her student Joe Gage and colleagues at several institutions report that artificial selection by crop breeders has constricted the pool of possibilities for North American corn varieties.

They conclude that the existing corn varieties are strong and stable, but are less flexible in their ability to respond to various stresses. At the same time, these corn populations might have a reduced ability to contribute to breeding programs that seek to create new varieties adapted to novel environments.

“Over the last 100 years, people have definitely improved cultivars,” explains de Leon, the senior author of the new report. “What we were trying to do in this study is to measure whether by doing that we have also limited the ability of the genotypes to respond to environments when they change.” 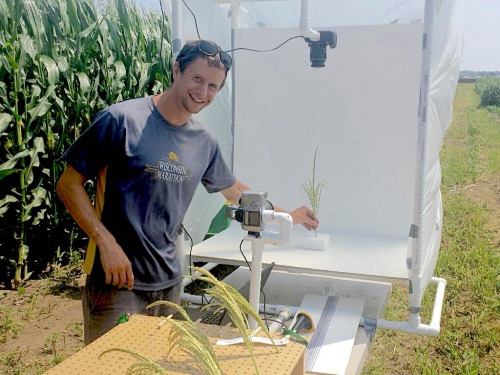 Joe Gage is one of the researchers who found that the regions of the corn genome that have undergone a high degree of selection were associated with a reduced capacity of corn to respond to variable environments. Photo: UW–Madison Department of Agronomy

By intensively breeding for high yield, say, in Wisconsin, those plants might lose the flexibility to respond to environments that are very different from Wisconsin growing conditions. To test this idea, de Leon and her colleagues at 12 agricultural universities in the U.S. and Canada devised a large field trial with more than 850 unique corn varieties at 21 locations across North America. There were more than 12,000 total field plots where researchers measured traits like yield and plant height while recording weather conditions.

The massive experiment is only possible because of a collaboration that de Leon, UW–Madison agronomy Professor Shawn Kaeppler and others lead, called Genomes to Fields. The project stretches across 20 states and into Canada, providing precisely the range of different field conditions that is required to tease apart the different contributions of the genomes and environments to the final traits of corn that were used in the new study.

De Leon and her collaborators found that the regions of the corn genome that have undergone a high degree of selection — for example, gene regions that contribute to high yield in a particular location — were associated with a reduced capacity of corn to respond to variable environments than genomic regions that weren’t directly acted on by breeders. The upshot is that the modern corn varieties are very productive in the environments they are grown in, but might have a harder time handling changes in those environments.

“When you try to adapt cultivars to many different environments, you end up with plants that are not great anywhere.”

“The data seem to point to the idea that by selecting genotypes that are better suited to be more productive, we are eroding variability that might be important as we move into a world where climate might be more erratic and where we might need to move cultivars into places where they haven’t been grown before,” de Leon says.

Yet this loss of flexibility is an inherent tradeoff for highly productive cultivars of corn, she says.

“When you try to adapt cultivars to many different environments, you end up with plants that are not great anywhere,” says de Leon. “The cost of maintaining this plasticity is at the detriment of maximum productivity.”

“So we have to strike the right balance in the long term,” she says.

This project was supported by the Agriculture and Food Research Initiative Competitive Grants Program (grant number 2012-67013-19460) from the USDA National Institute of Food and Agriculture, USDA Hatch program funds to multiple researchers in this project, NSF Plant Genome Research Project #1238014, the USDA-ARS, the Ontario Ministry of Agriculture, Food and Rural Affairs, the Iowa Corn Promotion Board, the Nebraska Corn Board, the Minnesota Corn Research and Promotion Council, the Illinois Corn Marketing Board, and the National Corn Growers Association.