This Sunday, thousands of winter graduates will earn degrees from UW–Madison. Each has an impressive story to tell. Here are just a few of the remarkable tales behind the names you’ll hear at the Kohl Center. For more details on the ceremony, visit commencement.wisc.edu.

Saving lives on campus — and elsewhere 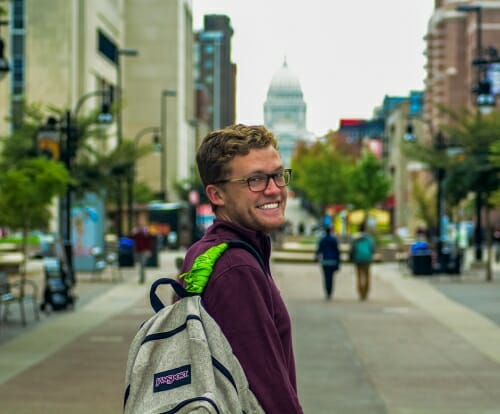 Conlin Bass of Verona, Wisconsin, had an idea his freshman year: Prevent suicides by raising awareness of campus mental health services. He and his friends started distributing lime green bandanas to do just that. The bandanas signal that the owner is a safe and informed person to approach about mental health issues. Now three years in, the Bandana Project has distributed more than 3,750 lime green bandanas to Badgers while expanding to other campuses in the country. Read more about the project here. 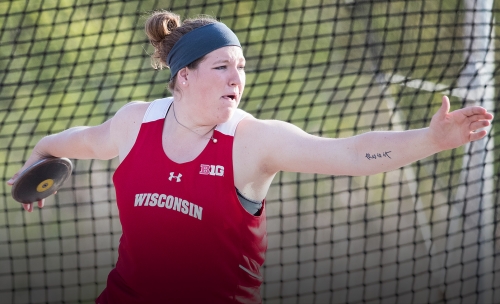 Hanna Barton threw discus for the UW–Madison track and field team, but she did plenty more while a student.

Hanna Barton ranks No. 4 on the UW–Madison list of the longest discus throws by a female track and field athlete, finishing sixth in the Big Ten last season. But she’s much more than an amazing athlete. The biomedical engineering major is a multiple Big Ten Distinguished Scholar and multiple Academic All-Big Ten honoree. She is a “University Innovation Fellow,” trained by the design institute at Stanford University to bring design thinking to students across campus. Through the Coach for College program, she has twice traveled to Vietnam to teach volleyball, biology and life skills to middle school students. Barton, of McFarland, Wisconsin, will be continuing her studies at UW–Madison as a graduate student in human factors and health systems engineering.

Performing on many stages — including the Kohl Center’s 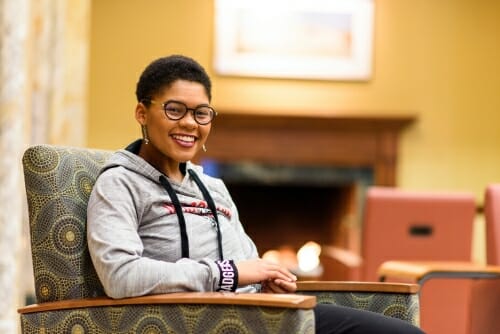 Jamie Dawson will be the student speaker during winter commencement on Dec. 16 at the Kohl Center. A member of the First Wave program, she will be receiving a Bachelor of Arts degree with majors in Afro-American studies and psychology. Photo: Bryce Richter

A seasoned spoken word artist, Jamie Dawson is about to reach her largest audience yet. The UW–Madison senior has been chosen as the student speaker for winter commencement. In high school in Tampa, Florida, she produced a large body of work through a youth arts poetry collective, and she competed nationally at poetry festivals. At UW–Madison, she has been a member of the 9th cohort of the groundbreaking First Wave Hip Hop and Urban Arts Scholarship Program. Familiarize yourself with this winter’s student speaker here.

Finding success after a difficult childhood 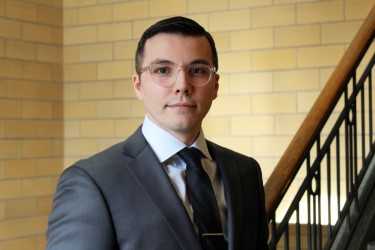 Chance Cork grew up on the street and in foster care. He dropped out of college and entered the workforce for six years, discovering an interest in engineering. Sheer grit got him to Madison College and then UW–Madison, where he overcame a learning disability and distinguished himself in the Materials Science and Engineering Program. Cork, who has lived in Madison for the past 13 years, is a recent winner of an Outstanding Undergraduate Returning Adult Student Award. More on his path to winter commencement can be found here.

Nabbing a world first while studying for exams 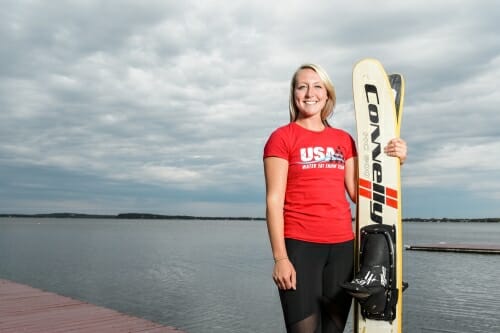 Accomplished international water skier Gabbie Taschwer, a UW–Madison senior, was part of a record-setting trio at the world championships in September. She’s pictured on a pier at the Porter Boathouse on Lake Mendota, where she often trains. Photo: Bryce Richter

On Sept. 8, kinesiology major Gabbie Taschwer of McFarland, Wisconsin, and two fellow members of the 2018 USA Water Ski Show Team became the first female trio ever to perform a triple helicopter spin in competition. The world record occurred at the Show Ski World Championships in Ontario, Canada. The three sailed off a ski jump, spun 360 degrees in the air, and stuck the landing. See the amazing feat here. Taschwer has been hired as a full-time professional water skier at the highly acclaimed Holiday Park theme park in HaBloch, Germany. She’ll begin in March.

Persevering for decades to earn a degree 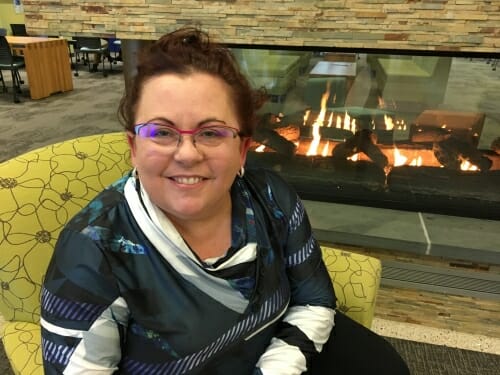 JoAnn Brink, pictured in front of the fireplace at the School of Nursing lounge, will be earning a bachelor’s degree in nursing Dec. 16. The effort took 20 years and many night and weekend classes while working full time and raising a daughter. Photo by Doug Erickson

When she set out to earn a bachelor’s degree in nursing, JoAnn Brink had no idea it would take 20 years. But life intervened. She took a break to have a child, and another break to get a divorce. Brink, 55, who grew up in Columbus, Wisconsin, squeezed in classes at night and on Saturdays while working full time and raising a daughter. Her journey culminates at winter commencement, where she has been chosen by the School of Nursing to carry its flag during the opening procession. Her inspiring story can be found here. 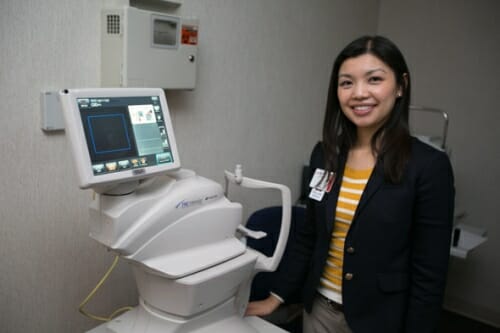 Dr. Yao Liu’s research focuses on increasing access to eye screenings for rural patients with diabetes. To better equip herself for that work, Liu, already an M.D. and an assistant professor on campus, decided to return to school. On Dec. 16, she will earn a master’s degree in clinical investigation through the UW Institute for Clinical and Translational Research. “The skills I have developed increased my confidence in pursuing high-quality research that advances the Wisconsin Idea,” says Liu, of Ann Arbor, Michigan. Read more about her research here.

Landing at his dream school via a road less taken 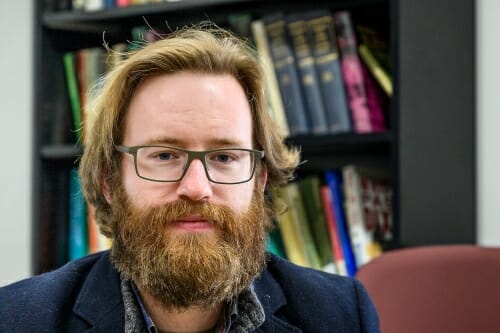 Undergraduate student and philosophy major Noah Ash, pictured in Helen C. White Hall, is an Army veteran who earned his degree through the GI Bill. “I would not have made it to UW–Madison without the military,” he says. Photo: Jeff Miller

Noah Ash, 31, of Watertown, Wisconsin, is an Iraq War veteran who will graduate this month with a double-major in philosophy and classical humanities. His journey, he says, shows there’s more than one path to becoming a Badger. “I would not have made it to UW–Madison without the military. I was given this amazing opportunity, and I have tried my best to make the most of it.” His wife, too, is an Army veteran and a UW–Madison student. Together, they are raising three young children while attending classes. Read more about the couple here.