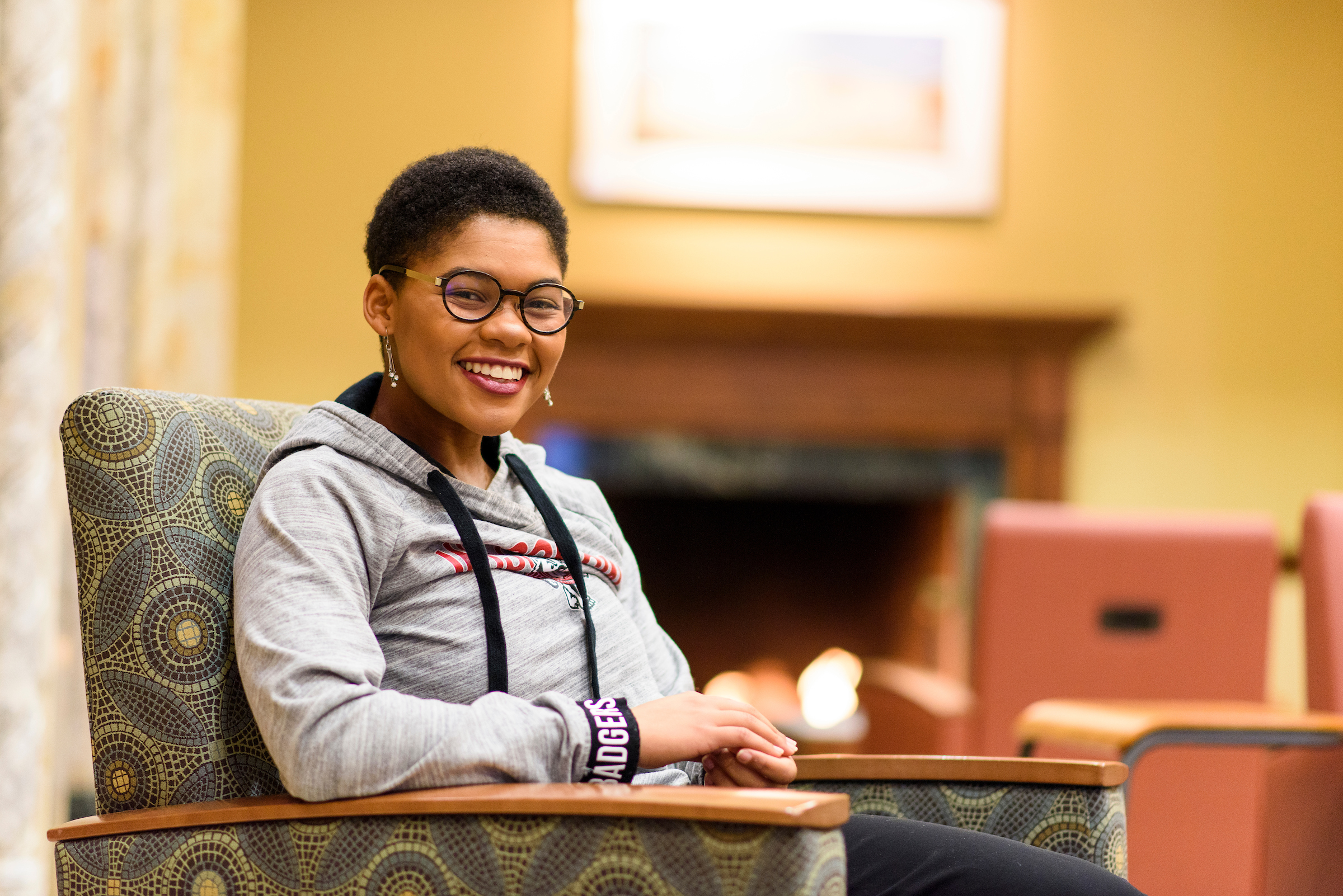 Jamie Dawson will be the student speaker during winter commencement on Dec. 16 at the Kohl Center. A member of the First Wave program, she will be receiving a Bachelor of Arts degree with majors in Afro-American studies and psychology. Photo: Bryce Richter

As a middle-schooler, Jamie Dawson could be found at the lunch table with the kids who loved words.

“We all naturally gravitated toward each other,” she says. “They were all great writers. Someone would start beating on the table, and everyone would join in freestyling.”

It proved a good training ground. Now a seasoned spoken word artist, Dawson is about to reach her largest audience yet.

The UW–Madison senior has been chosen as the student speaker for winter commencement on Dec. 16 at the Kohl Center. She will be receiving a Bachelor of Arts degree with majors in Afro-American studies and psychology.

All winter graduates were eligible to apply for the honor. The senior class officers made the selection.

“While hearing more about Jamie and her experiences at UW–Madison, we knew she was someone who reflected what the Wisconsin Idea stands for,” says Ronald Steinhoff, senior class president. “Her drive to embrace the Wisconsin Idea led her from the UW Global Gateway program to being a leading artist on campus, among other things. We can’t wait to hear Jamie share her inspiring story of overcoming adversity in a way that all graduates will be able to relate to.”

“I will be very intentional. This will not be a squandered moment.”

Dawson, born and raised in Tampa, Florida, says her early years were sometimes challenging. She and her mother spent years living with extended family in cramped quarters. During those times, she would dream of the kinds of educational opportunities that would one day come true for her at UW–Madison, she says. Long before her selection as the student commencement speaker, she thought about what she’d want to say about her journey to her fellow graduates.

“I will be very intentional,” she promises. “This will not be a squandered moment.”

Her confidence comes in part from years of writing and performing. In high school, she produced a large body of work through a youth arts poetry collective, and she competed nationally at poetry festivals. At UW–Madison, she has been a member of the 9th cohort of the groundbreaking First Wave Hip Hop and Urban Arts Scholarship Program.

“Being a scholar, artist and activist is such an interesting path in life,” she says. “First Wave legitimizes art in so many ways and makes its impact and reach seem limitless.”

During her time on campus, Dawson worked as the house fellow for the Multicultural Learning Community, assisted with research at the Language & Cognitive Neuroscience Lab, and served as a student facilitator with Our Wisconsin, the identity and inclusion workshop for first-year students. In April 2017, Dawson was inducted into the Phi Beta Kappa Honor Society and has since served as a fellow for the Alpha Chapter of Wisconsin. During her summers, she studied abroad and interned in Brazil, New York, the Netherlands and Denmark.

Dawson says she will stress in her commencement speech the power of individuality and the importance of owning your talents and using them to benefit others.

She thinks her old friends at the middle school lunch table would be proud of her — but not surprised. They expected big things from each other.

“Oh, they definitely would have seen this coming,” she says.