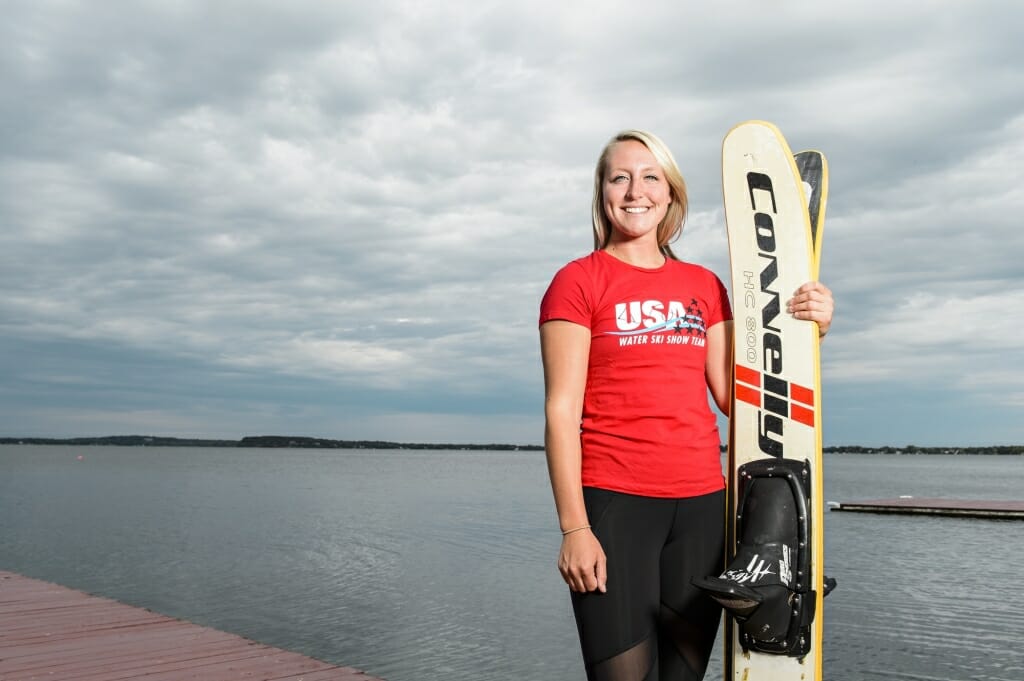 Accomplished international water skier Gabbie Taschwer, a UW–Madison senior, was part of a record-setting trio at the world championships in September. She’s pictured on a pier at the Porter Boathouse on Lake Mendota, where she often trains. Photo: Bryce Richter

Gabbie Taschwer doesn’t quite walk on water, but she’s almost that good.

The UW–Madison senior and two fellow members of the 2018 USA Water Ski Show Team just became the first female trio ever to perform a triple helicopter spin in competition.

The record-setting feat occurred Sept. 8 at the Show Ski World Championships in Ontario, Canada. The three sailed off a ski jump, spun 360 degrees in the air, and stuck the landing.

The jump had never been attempted or accomplished by three female skiers in any tournament in the world, according to Gerry Luiting, chairman of the Show Ski Council of the International Waterski & Wakeboard Federation.

“The crowd gave them a huge standing ovation, and that doesn’t happen at the world championships unless it’s pretty amazing,” he says. “It’s analogous to a standing ovation at the Olympics.” 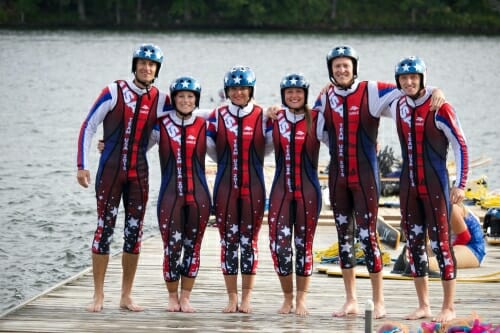 Luiting co-led the U.S. team, which won the world championship. He praises Taschwer as among the best water skiers in the country. She swivel skis, climbs to different levels of pyramids, barefoot skis, jumps and performs tricks.

“I’ve watched her since she was a little girl,” he says. “She doesn’t see that being a woman is a barrier, and that’s awesome. She essentially does all of the traditional girl acts in the show and many of what traditionally have been guy acts.”

“She is truly fearless,” says Julie Patterson, who got to know Taschwer as a teaching assistant for a class Taschwer took. “She has motivated girls across the world to break down all boundaries in the sport of water skiing.”

Taschwer, who’s been water skiing since age 3, says she rarely gets nervous anymore, though the world championships tested her.

“I tried to tell myself it was just another ski show, but I had a few butterflies,” she says. “It was pretty cool to make history.”

This was Taschwer’s first time on the 35-member team, which includes skiers, boat drivers, announcers and show directors.

“It was such a thrill and an honor to ski with people I’ve looked up to all my life,” she says.

Joining Taschwer in performing the record-setting jump were teammates Bailey Nadeau of Naples, Florida, and Rachael Zenk of Minneapolis, Minnesota.

There is no shortcut to learning a trick, Taschwer says.

“It’s just a lot of crashing until you figure it out,” she says. “It’s a high-risk sport, but high-reward, too.”

Taschwer grew up in McFarland, just outside of Madison. She learned to ski on Lake Waubesa with her parents, both former professional water skiers. Her father, Jeff, is a pharmacist at the Madison VA Hospital. Her mother, Lori, works on campus for the Surplus With A Purpose (SWAP) program.

Taschwer began skiing part-time as a paid performer with the Tommy Bartlett Show in the Wisconsin Dells seven years ago when she was a high school freshman. She moved up to full time three years ago. This past summer, she performed two shows a day, six days a week.

She has skied for many years with the Mad-City Ski Team, which competes regionally and nationally. And she’s a member of the UW Water Ski & Wakeboard Team, a recreational sports club. At the collegiate conference tournament Sept. 22-23, Taschwer took third overall for women skiers and the team placed third overall.

Finding time for world-class competition while studying has sometimes been tricky for Taschwer. She missed four days of classes for the world championships this year, emailing her professors over the summer to alert them in advance.

She will graduate this winter in 3 ½ years with a bachelor’s degree in kinesiology. To graduate early, she took summer courses online, studying between shows on the docks of the Tommy Bartlett Show.

She chose to finish as quickly as possible so that she can devote the next year or two to skiing professionally while still in peak condition. She plans to audition for the highly acclaimed Holiday Park Ski Team in Germany. Both of her parents skied with the team decades ago.

For her 96-hour kinesiology practicum, Taschwer combined her schoolwork with her passion and volunteered with Colsac Skiers Inc., a water ski school on Lake Wisconsin for children and adults with disabilities, including veterans injured during their military service.

“It was so wonderful to give others an experience that means so much to me,” she says.