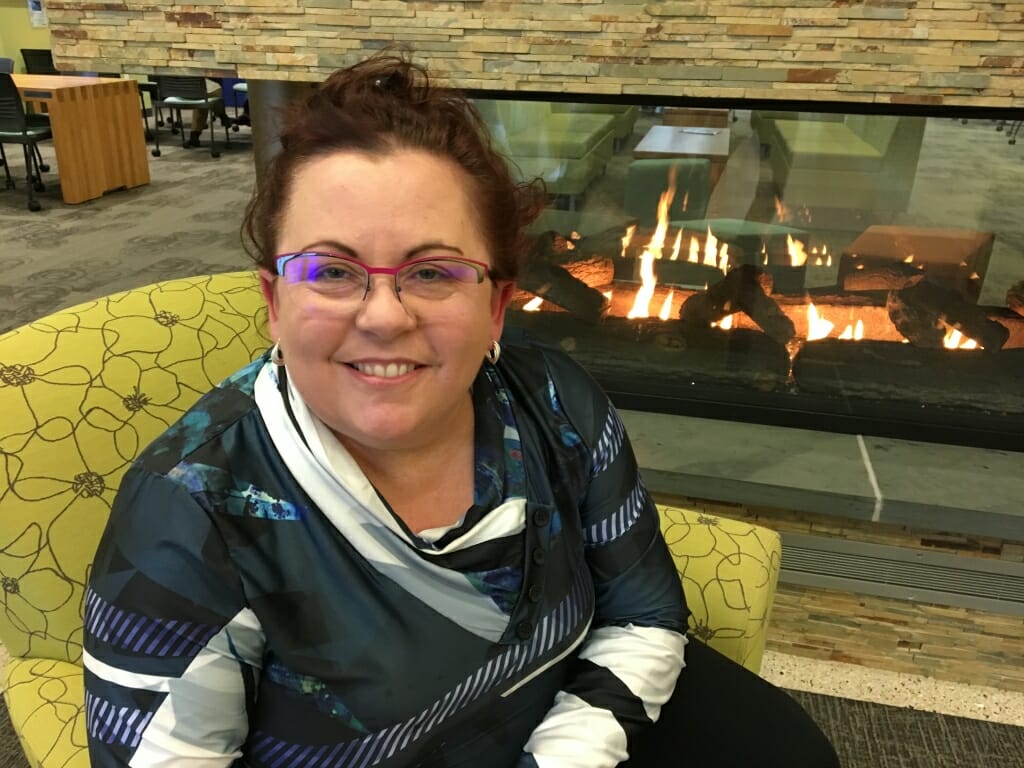 JoAnn Brink, pictured in front of the fireplace at the School of Nursing lounge, will be earning a bachelor’s degree in nursing Dec. 16. The effort took 20 years and many night and weekend classes while working full time and raising a daughter. Photo by Doug Erickson

Everything you need to know about JoAnn Brink’s approach to life — from her compassion to her grit — can be found in a story from 2002.

She was competing in the annual Crazylegs Classic on campus when a runner in front of her collapsed from a heart attack. Brink performed mouth-to-mouth resuscitation while another runner began chest compressions. A police officer soon arrived with a defibrillator.

On Dec. 16, Brink will cross a different finish line, one that took just as much perseverance to reach. She will earn a bachelor’s degree in nursing from UW–Madison, an effort that took 20 years.

“If you know me at all, I fight, I claw,” says Brink, 55, who grew up in Columbus, Wisconsin. “There was no way I was not going to finish that degree.”

On the day she helped save the fellow runner’s life, Brink already was working as a registered nurse at UW Hospital. She had earned a two-year associate degree in nursing from Madison Area Technical College in 1997. Yet she was determined to continue her education.

“The two-year degree at MATC is outstanding — I can’t say enough good things about it,” she says. “But I’ve always wanted a bachelor’s degree. I love to learn, and I felt the four-year degree would make me a more well-rounded person.”

“If you know me at all, I fight, I claw. There was no way I was not going to finish that degree.”

Brink squeezed in classes wherever she could — usually one per semester — while working full time. Many classes were at night or on Saturdays. A few were online.

There were blips. She took off a couple of years to have a baby, then a couple more to rebound from a divorce.

For eight years, she worked the 7 p.m. to 7 a.m. shift in the trauma intensive care unit at UW Hospital. Many mornings, she would leave the hospital and drive to MATC, then grab an hour of sleep under a blanket in her car. With no time to change, she attended class in her scrubs.

It’s safe to assume that many faculty members have memories of her, says Brink, who currently works as a dialysis nurse at Fresenius Kidney Care in Fitchburg.

“I’m one of those students who sits in the front row, so the instructor is going to know me. I ask a lot of questions. I just learn more that way.”

Brink loved being a student, though she doesn’t sugarcoat it.

“It was hard, and I never thought it would take this long,” she says. “It seemed like every road block in life that could be thrown in front of me was.”

Brink has been accorded the honor of being the flag bearer for the School of Nursing during the opening procession at winter commencement at the Kohl Center on Dec. 16.

“JoAnn has been a part of the School of Nursing longer than most of us who work here,” says Karen Mittelstadt, assistant dean for academic affairs. “It is highly unusual to take quite that long to graduate, and yet everyone who knew JoAnn also knew she had the tenacity to finish. She is a wonderful example for her classmates and a great choice to represent the school.”

Cheyenne, Brink’s 13-year-old daughter, will be among those cheering for her at the Kohl Center. Brink chokes up talking about her.

“She has had to take a back seat to my studying,” she says. “I plan to begin making it up to her the second I graduate.”

Commencement day will be emotional, Brink says. There will be tears.

“I don’t think I’m going to be able to handle it,” she says. “This is probably one of the highlights of my life. I plan on walking across the stage — with a much younger crowd — with my head held high.”