A splash of silver turns diamond films shades of green, blue or purple

While most gem buyers might balk at a diamond imbued with yellow or green — a sign of impurity — such hues are prized in industry.

Colorful diamonds can be useful precisely because they allow the otherwise colorless crystal to start absorbing more light. Light, in turn, can power all manner of useful transformations, such as chemical reactions, that diamond is well suited for. But capturing light in transparent diamond, especially in razor-thin films of the gemstone, can be tricky. 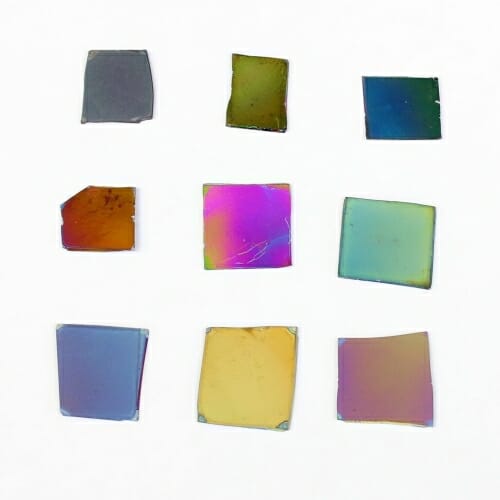 An array of colorful diamonds shows the hues imparted to the crystal by embedding silver nanoparticles in between very thin films of diamond. The colorful diamonds could make the diamond suitable for light-powered chemical reactions. Photo by Shuo Li

Developing a new method, Shuo Li, a doctoral student in the lab of University of Wisconsin–Madison Professor of Chemistry Robert Hamers, has succeeded in creating an array of colorful thin diamond films. By packing particles of silver between thin layers of diamond, Li imbued the crystal with new hues. Li could control the final color by varying the size of the nanoscale silver particles, providing a means to generate a range of greens, blues, purples and other colors.

The work was published recently in the journal Diamonds & Related Materials. Hamers and Li say the relatively simple method will help them explore light-powered chemical reactions catalyzed by diamond, reactions which are much more difficult in transparent films of the material.

“This is the first report that silver can be grown into the diamond at a very fine structure to create color,” says Li, who has pursued this project for the past three years. 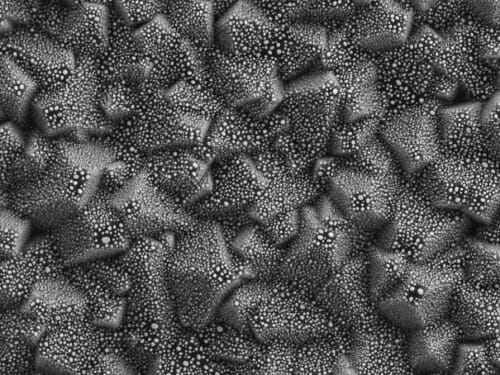 Light-colored silver nanoparticles dot a craggy layer of diamond as seen from above the surface. Photo by Shuo Li

Hamers has researched thin diamond films for 15 years. Like larger diamond crystals, the thin films are prized for their stability and hardness. Diamond films can be used as scratch-proof coatings on other materials or for their ability to conduct heat and electricity. At around 500 nm thick, hundreds of the thin films could be stacked within the thickness of a single sheet of paper.

Color in a material like diamond comes from atoms of something other than carbon embedded in the crystal. For Li’s research, silver was the perfect candidate, because its electrons — the ultimate source of light — happen to resonate right within the visible wavelengths of light.

But at the temperatures exceeding 1000 degrees Fahrenheit that are used to create diamond films, silver tends to spread out and pool rather than form the tight nanoparticles that lead to consistent colors. 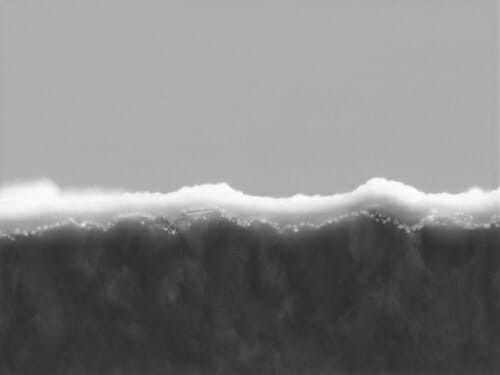 A cross-section of a thin diamond film shows light-colored silver nanoparticles following the ridges of a diamond film, with another layer of diamond applied on top. Photo by Shuo Li

Li encouraged the silver to remain as beaded particles by altering the diamond surface. After producing one thin layer of diamond, Li saturated it with plenty of hydrogen atoms. The hydrogen made the diamond loath to interact with any other material, including the silver Li added next.

Like a drop of water beading up on a waxy leaf, the silver formed particles rather than spreading out. Atomic-scale images reveal the silver beads dotting craggy mountains of diamond crystal. A second layer of diamond sealed in the silver particles, freezing them in place.

“This was a big surprise to me,” says Hamers. “I thought everything would just turn into one big puddle.”

One size of silver beads created a dark forest green. Another produced a bright magenta. A third led to turquoise. Li could tune the color as he saw fit by varying the thickness of silver he applied. The final product could be transparent or opaque, depending on what backing material the diamond film was layered on.

The researchers have submitted a patent based on their work and are now looking to make the diamond–silver patterning more regular as one step toward reproducibly generating consistent colors. That consistency will help them explore useful chemical reactions. The diamond-coated silver particles could also be used as chemical sensors.

In the meantime, Li will grow his collection of colorful diamonds quite unlike anything you can find at the jeweler.

This work was supported by the National Science Foundation Division of Materials Research (grant DMR-1507432).