A marriage made in sunlight: Invention merges solar with liquid battery

As solar cells produce a greater proportion of total electric power, a fundamental limitation remains: the dark of night when solar cells go to sleep. Lithium-ion batteries, the commonplace batteries used in everything from hybrid vehicles to laptop computers, are too expensive a solution to use on something as massive as the electric grid.

Song Jin, a professor of chemistry at the University of Wisconsin–Madison, has a better idea: integrating the solar cell with a large-capacity battery. He and his colleagues have made a single device that eliminates the usual intermediate step of making electricity and, instead, transfers the energy directly to the battery’s electrolyte. 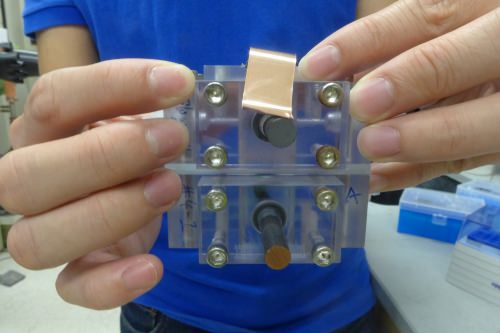 This solar-charged battery, developed in the lab of Song Jin at the University of Wisconsin–Madison, directly stores energy from sunlight in a tank. David Tenenbaum

Jin chose a “redox flow battery,” or RFB, which stores energy in a tank of liquid electrolyte.

In a report now online in Angewandte Chemie International Edition, Jin, graduate student Wenjie Li, and colleagues at the King Abdullah University of Science and Technology in Saudi Arabia have demonstrated a single device that converts light energy into chemical energy by directly charging the liquid electrolyte.

Discharging the battery to power the electric grid at night could hardly be simpler, Jin says. “We just connect a load to a different set of electrodes, pass the charged electrolyte through the device, and the electricity flows out.”

Solar charging and electrical discharging, he notes, can be repeated for many cycles with little efficiency loss.

Unlike lithium-ion batteries, which store energy in solid electrodes, the RFB stores chemical energy in liquid electrolyte. “The RFB is relatively cheap and you can build a device with as much storage as you need, which is why it is the most promising approach for grid-level electricity storage,” says Jin, who also works on several other aspects of solar energy conversion. 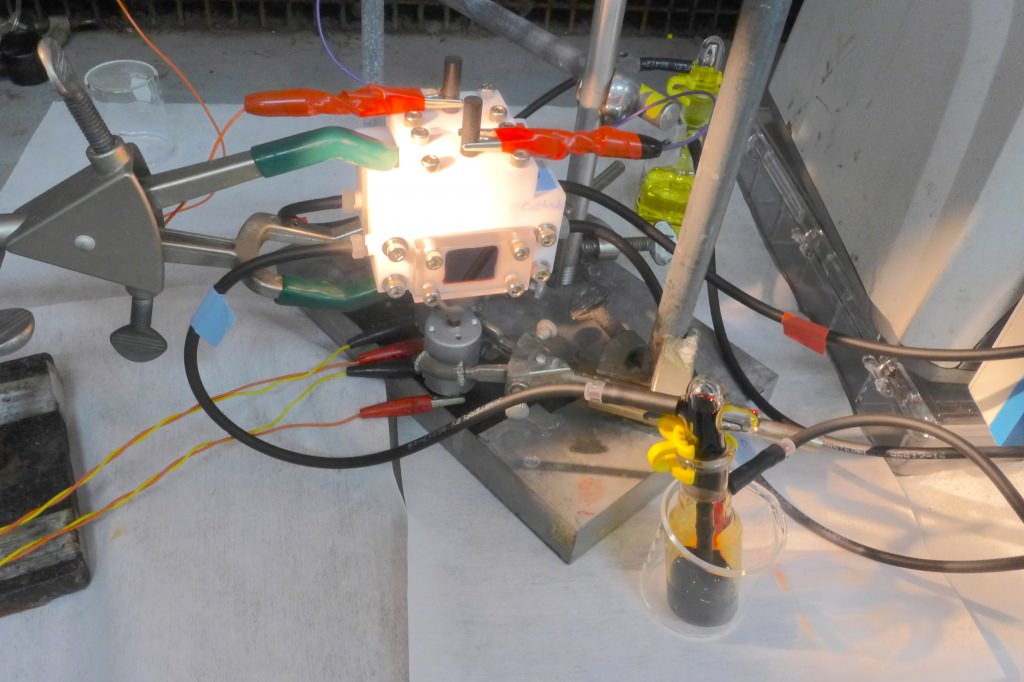 This solar-charged device directly transfers energy from sunlight into a liquid battery and stores it in the container at lower right. During the discharge cycle, electricity leaves the device through electrodes at top. David Tenenbaum

In the new device, standard silicon solar cells are mounted on the reaction chamber and energy converted by the cell immediately charges the water-based electrolyte, which is pumped out to a storage tank.

Redox flow batteries already on the market have been attached to solar cells, “but now we have one device that harvests sunlight to liberate electrical charges and directly changes the oxidation-reduction state of the electrolyte on the surface of the cells,” says Li, the first author of the new study. “We are using a single device to convert solar energy and charge a battery. It’s essentially a solar battery, and we can size the RFB storage tank to store all the energy generated by the solar cells.”

The unified design suggests multiple advantages, Jin says. “The solar cells directly charge the electrolyte, and so we’re doing two things at once, which makes for simplicity, cost reduction and potentially higher efficiency.” 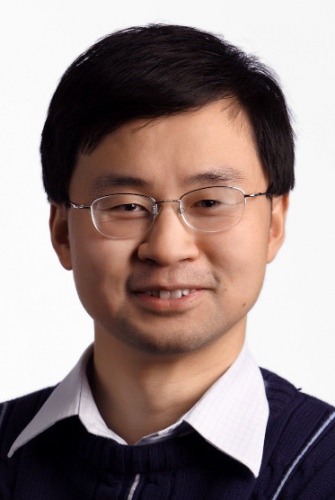 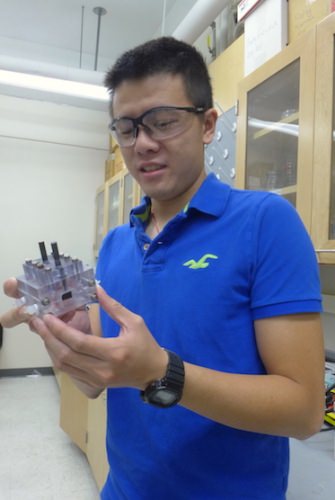 Having proven the concept of an integrated, solar-charged battery, Jin and Li are already working on improvements. One would be to match the solar cell’s voltage to the chemistry of the electrolyte, minimizing losses as energy is converted and stored.

The aqueous electrolyte used in the current study contains organic molecules but no expensive rare metals, which raise costs in many batteries. Jin and Li are also searching for electrolytes with larger voltage differential, which currently limits energy storage capacity.

A system that both creates and stores electricity will be judged by cost, efficiency and energy storage density, Jin says. “It’s not just about the efficiency of converting sunlight into electricity, but also about how much energy you can efficiently store in the device.”

As solar energy use grows, the storage problem becomes more acute. “People say the solar electricity capacity cannot exceed about 20 percent of overall grid capacity, because of supply shortages at night or during cloudy weather,” Jin says. “In some places, further solar installations may have to wait until better storage is available.”