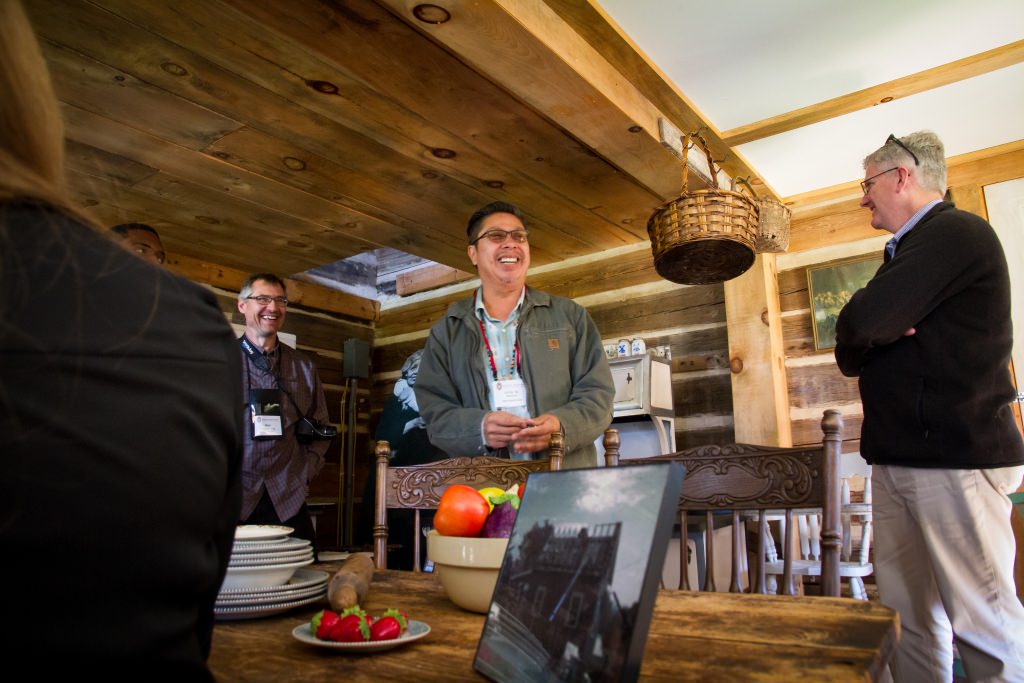 Kirby Metoxen, the Oneida Nation’s Special Events Tourism Coordinator, leads the Wisconsin Idea Seminar participants in May 2016 on a tour of Salt Pork Avenue, a cultural heritage site that features period homes representing various points in the Oneida Nation’s history in Wisconsin. Here Mr. Metoxen stands in the Tilly and Chancey Baird House, the former home of his grandparents (a life-size photo of his grandmother is just visible beyond his right elbow). Catherine Reiland/UW-Madison

A five-day tour that has become a staple of the Wisconsin Idea will introduce dozens of UW–Madison faculty and academic staff to the geography, culture and history of Wisconsin.

“This foundational philosophy (the Wisconsin Idea) runs deep and reminds us that the teaching and research we do on this campus benefits and serves the people of Wisconsin and beyond,” wrote Chancellor Rebecca Blank in her call for nominations, which are due Feb. 15.

The 2017 Wisconsin Idea Seminar will stop along the banks of the Mississippi, Kickapoo, and Wisconsin Rivers.  “These great waterways will be a narrative frame for our exploration of Wisconsin life,” says director Catherine Reiland. “We will visit a dairy farm, meet environmental stewards and business owners, walk the valleys, and explore the rolling hills of the Driftless Area, the non-glaciated portion of Wisconsin’s southwest through which these rivers flow.”

The seminar began in 1985, and is open to faculty, staff and recently promoted administrators, with priority given to those who are new to the state.

“The goal is to build and cement ties to lands and cultures that are deeply familiar to many of the UW–Madison’s students and to residents of a state that takes pride in its university,” Reiland says, and she adds, “The Seminar shows examples of the important ways that the people of Wisconsin contribute to the success of the university, and in turn, how the university serves the state to enhance lives of Wisconsinites.”

“People have been living along Wisconsin’s rivers for about 12,000 years,” she adds. “Rivers have formed barriers and borders while aiding in the dissemination of peoples, languages, customs and goods. Rivers make us contemplative: of history and time, of connections and the interweaving of things.”

Confirmed highlights of the 2017 tour include:

Joseph Salmons, a linguist from the southern U.S. who participated in the Seminar in 1997, encourages colleagues to join the annual tour.

“We became aware of all these things about Wisconsin; its history, culture and contemporary Wisconsin,” he says. The trip did not pay off instantly, he admits. “It’s not like I got off the bus and understood all this stuff, but it set things up and helped me understand what I have learned since.”

Salmons, a professor of German, focuses on German-American studies. He has started recording people who speak German at home. “There are thousands of them, even though some of their ancestors came in the 1830s or ‘40s,” he says. 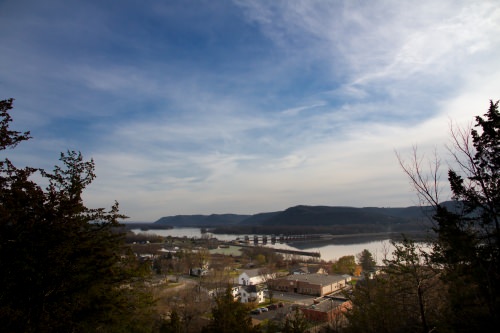 The Little Bluff Mounds Interpretive Trail culminates in a grand view of today’s village of Trempealeau. Trempealeau is a destination of the 2017 Wisconsin Idea Seminar. Catherine Reiland/UW-Madison

Years after the seminar, Salmons and several colleagues formed the Center for the Study of Upper Midwestern Cultures, and he began to study “Wisconsin Englishes. You can hear how the Milwaukee accent is different than Northern Wisconsin or West Wisconsin, and how past and present demographics and immigration have shaped the language, and we now have students recording people with all sorts of heritages — Finnish, Swedish, Polish, Hispanic.”

One example, he says, is a phrase that seems “completely normal in Eastern Wisconsin: ‘Pass me the milk, once.’” That trailing “once” is a remnant of German and Dutch that “people from outside the region don’t know at all,” Salmons says.

“What we’re finding is that the social meaning of ‘once’ is changing,” Salmons says. “It used to mean you have Dutch or German ancestry; now it means you are from Eastern Wisconsin. Before the seminar, I did not think about how broadly being a linguist could connect you with the state.”

Beyond introducing UW–Madison faculty and academic staff to the state they serve, the Seminar has sparked unpredictable interests and collaborations. “During a dinner in Door County a professor of printmaking sat next to a bacteriologist and a conversation started. That exchange inspired them to lay the groundwork for a community project that combines art and science.”

The Wisconsin Idea Seminar alumni base is now more than 1,000 strong. Reiland says, “Many alumni tell their colleagues to ‘just do it!’ because they know from experience that during the Seminar participants often develop deep bonds with each other and make connections that transcend disciplines, academic research interests, and roles at the university.”