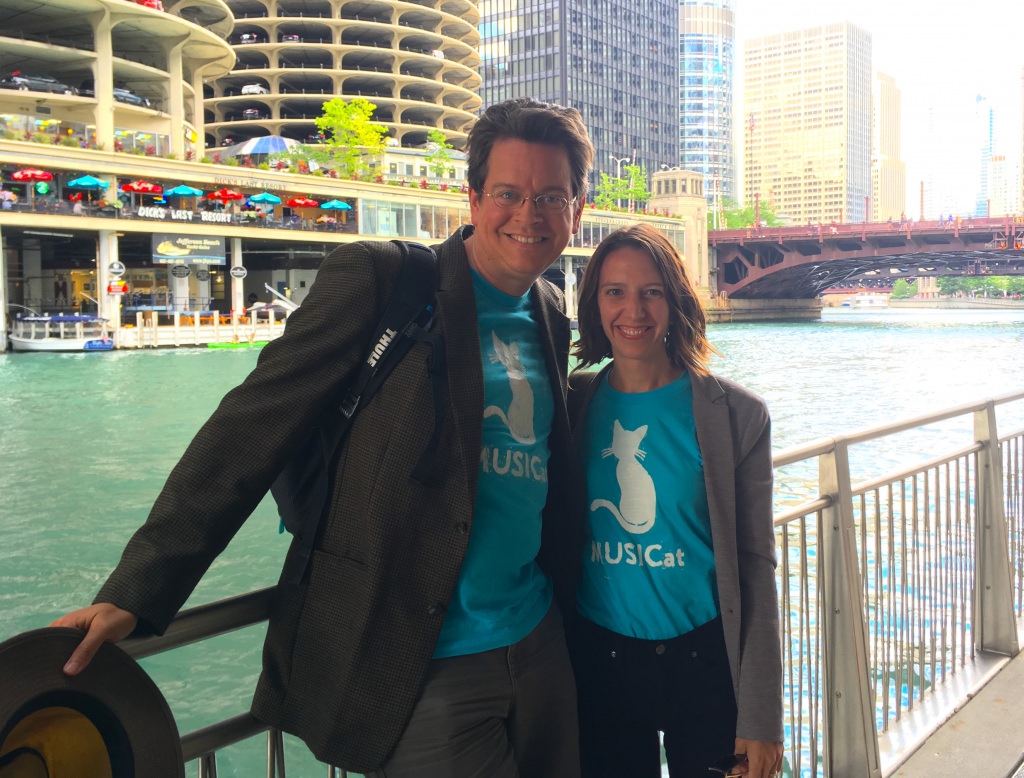 Preston Austin and Kelly Hiser, co-founders of Rabble LLC, on June 26, during the annual meeting of the American Library Association in Chicago. Courtesy of Rabble LLC

On July 5, Hennepin County Library became the sixth library system to offer access to software that presents the sound of local musicians in an easy-to-access format.

The Minneapolis-area system joins Seattle, Nashville, Omaha, Madison and Edmonton, Alberta, in using the software developed by Rabble LLC, a Madison startup with roots at the University of Wisconsin–Madison.

The Hennepin library serves a population base of approximately 1,000,000.

Musicians benefit from a one-time payment from the library, and from the exposure to both patrons and event organizers looking for music with a local touch. Library patrons can listen to tracks or download them, or save selections as favorites via the library’s MUSICat website. Many libraries establish a separate name and URL for the service, says co-founder Kelly Hiser.

At the Madison Public Library, for example, the music lives at Yahara Music Library.

Hiser’s interest in digital music can be traced to her Ph.D. in musicology at UW–Madison, which focused on instruments reliant on analog electronics rather than digital technology. Most striking was the giant Telharmonium. Invented in 1896, one version weighed almost 200 tons.

Contrary to today’s received wisdom, she discovered, electronic music originated with imaginative musical inventors and performers rather than people linked to universities.  “I found that there was a lot of popular electronic music before the beginnings of academic history,” Hiser says. It was, in other words, an anti-elitist movement.

The company’s seeds were planted during Hiser’s year-long Public Humanities Fellowship at Madison Public Library, funded by UW–Madison’s Center for Humanities. At the library, Hiser worked on various digital music applications, including a first foray into music lending. 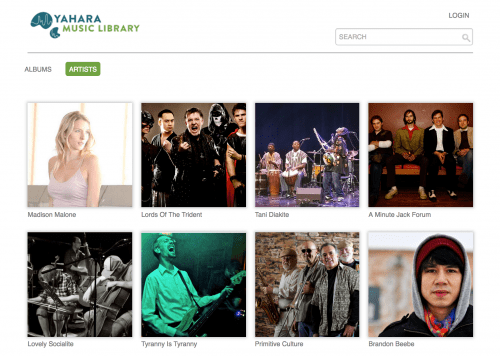 An opening screen for the Yahara Music Library, a project of the Madison Public Library that is based on MUSICat software provided by Rabble LLC. Courtesy of Rabble LLC

Before the year was up, she began talking with Preston Austin of the Madison digital music service Murfie about expanding the idea into a startup. The result was Rabble, and its service, MUSICat, a digital channel for presenting music created in a library’s backyard to its patrons.

The sense of “music up from the roots” that had emerged from her dissertation pervades Rabble, Hiser says. “Lots of questions were being asked then and now about how we as a society – and as academics or audiophiles — value certain kinds of music labor and practice. Those are the kind of questions I am interested in, and they inform the ethics of how Rabble practices business.”

The company charges libraries a uniform startup fee, and an annual fee based on the population of its service area. Payments are negotiated between musicians and libraries, but Hiser estimates that an album’s creators typically may be paid $200 to $250 for a one-time, non-exclusive license. In many cases, anyone can stream a track, but downloads are only available to library card-holders.

Rabble also respects the library ethos — that more information and more culture is usually better than less, Hiser adds. “With the libraries as partners, we are building a digital public space together, that empower libraries to license directly from local musicians. We are not involved in that relationship — we just facilitate it through our app.”

Hiser, the CEO, works remotely from her home in Pittsburgh. Austin, the technical lead, works in Madison with a third Rabble employee.

Rabble offers libraries another way to expand both their offerings and their reach, Hiser says. “Libraries are increasingly going after content for communities that are underserved; they see that as a professional responsibility. And if you take out the middleman vendor from the licensing relationship, more money is left for the musicians. We want to facilitate that; we do not directly benefit from licensing.

“Libraries, more and more, are becoming centers for creative activities, so this is a natural move,” Hiser adds. “We are seeing libraries partner with people who are doing podcasts or documentaries. Museums and other cultural organizations looking for music for events come to regard these sites as their expert source on what local musicians they should be paying attention to.”

As new albums enter the collections, libraries get the opportunity to stage events, Hiser adds. “Seattle has a launch party with each submission round where local celebrities in and out of the music world can get involved.”

With a series of contracts under negotiation, Rabble is gaining momentum, Hiser says. “We are getting to the point where we are paying everyone. It was not easy, but it is exciting; we feel we are going to be a sustainable, healthy company.”