Winter Commencement: Surprises, celebration and moving on to that ‘adult thing’ 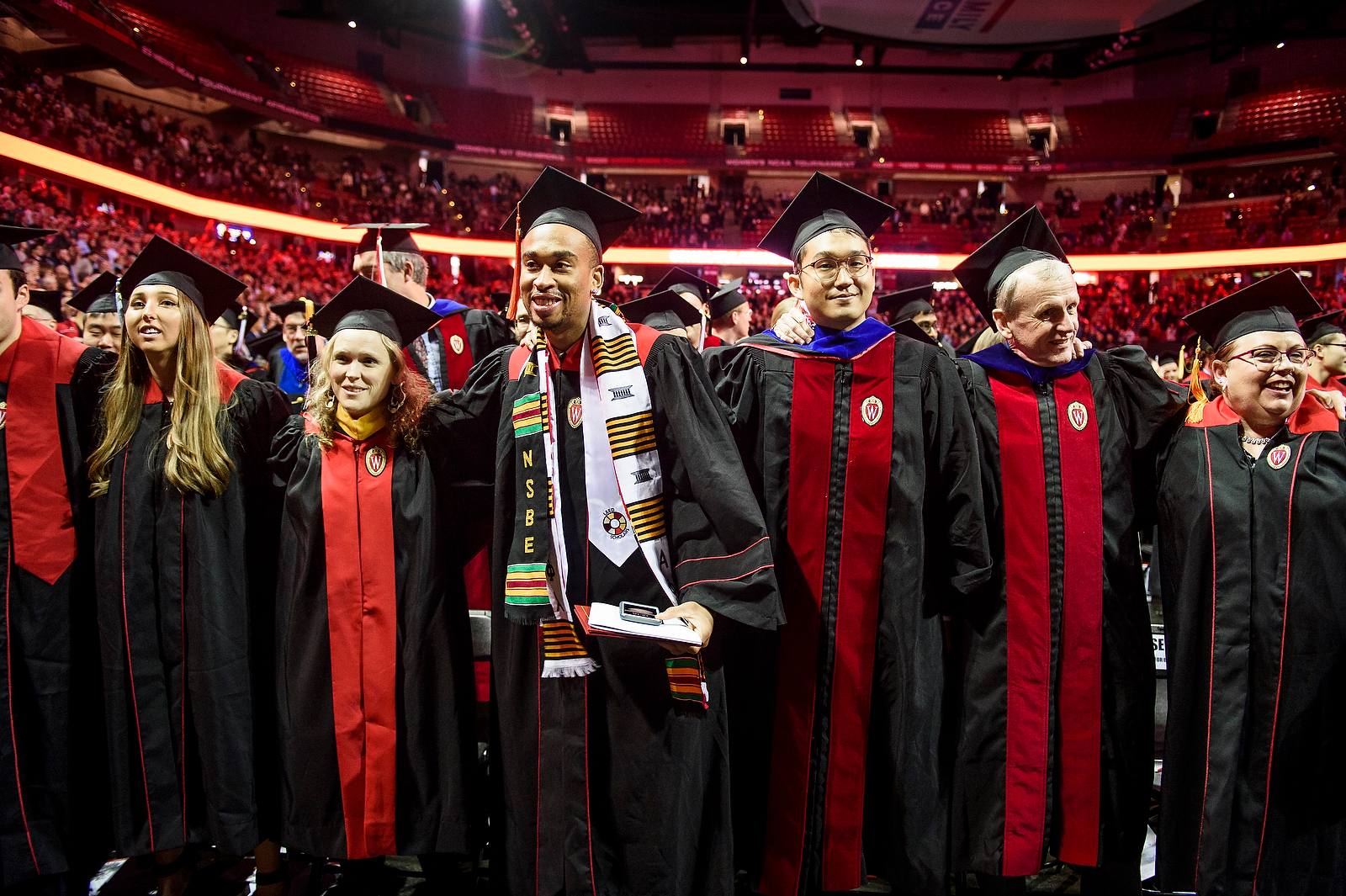 Mary Jauch raced to the Kohl Center from Milwaukee early Sunday to be among the first through the doors for UW–Madison’s winter commencement. She then spent the next two hours fending off people hoping to snag some of the 12 prime seats she’d saved.

It was all worth it. The dozen seats filled with family members there to surprise her daughter, nursing graduate Hannah Jauch.

“She thinks it’s going to be just me and her dad, but her brother is here, and two nieces and aunts and uncles,” said Jauch. “We couldn’t be more proud of what she’s accomplished.”

Hannah was among the roughly 1,300 undergraduates, graduate students and professional students who participated in the ceremony. Thousands more cheered them on, for a total crowd size, including graduates, of 7,999.

Sunday’s audience proved that no graduate does it alone. It was sometimes hard to tell who was more thrilled, the ones wearing gowns or the ones in the stands.

“I’m so excited I could levitate off the floor,” said Regina Zollicoffer-Purdy, as she took photos of her son, Justus Gaines of Milwaukee. He earned a bachelor’s degree in gender and women’s studies.

Sara Smith, of Fort Wayne, Indiana, focused her camera on the “Badgers” necklace around her daughter’s neck. She’d given it to Ashlee in high school.

“I never doubted she’d finish,” Smith said of her daughter, who earned a bachelor’s degree in athletic training. “She’s been strong-willed since Day One.”

Chancellor Rebecca Blank praised the graduates for working tirelessly to achieve the dream of a college degree. She singled out neurobiology major Conlin Bass as she urged class members to turn their knowledge and their challenges into wisdom. 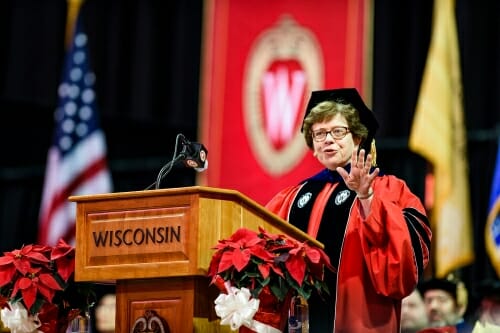 When Bass came to UW, he’d recently lost two loved ones to suicide. He started the Bandana Project to show support for people struggling with mental illness. Thousands of free lime-green bandanas have now been distributed to students and staff. Tied to backpacks, the bandanas signal a sympathetic person who is informed about campus mental health services.

“It is not always easy to view difficult and painful experiences in your life as opportunities, but I hope you will remember that these are often the places where wisdom begins,” Blank said.

The crowd cheered as live footage of Bass flashed on the Kohl Center videoboard. He’d decorated his mortar board with Bandana Project stickers.

Keynote speaker Allan “Bud” Selig, commissioner emeritus of Major League Baseball and a 1956 UW–Madison grad, told graduates that when he was in their shoes more than 60 years ago, he figured he’d one day be a history professor. But that wasn’t his passion, he said. He dreamed instead of “a baseball life.” He persevered to make it happen, moving a bankrupt Seattle franchise to his hometown and founding the Milwaukee Brewers. 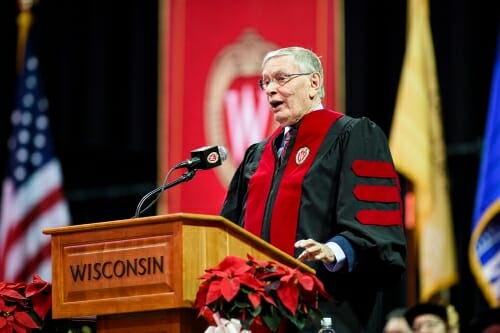 Selig delivers his address to the graduates. Photo: Bryce Richter

He encouraged graduates to live “big, limitless dreams” while also never losing sight of their social responsibilities. Baseball’s “proudest and most important moment” was when Jackie Robinson stepped onto a big-league baseball field and forever tore down the game’s racial barrier, Selig said.

Student speaker Jamie Dawson, a crowd favorite with an enthusiastic fan club among audience members, encouraged her fellow graduates to “walk toward the things that give you joy,” but also to not be afraid of life’s complexities. On campus, she organized protests that gave underrepresented students a voice through art. Embrace your story, your opinions, your creativity, she said Sunday. 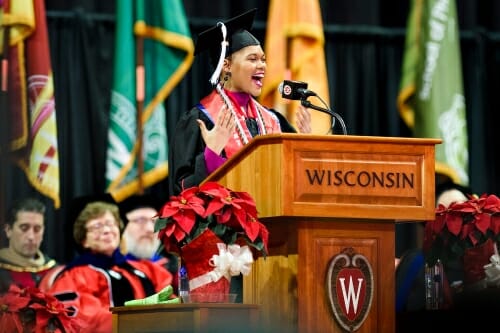 “Stand tall in the face of pushback,” she said. “Don’t be afraid of the pull.”

For Skylar Witte of Wausau, Wisconsin, commencement felt like destiny. As a young child, she would visit relatives in the Madison area and drive by Witte Residence Hall. She assumed it was named after someone in her family. It wasn’t. Still, it cast a spell.

“This is the only place in the world where people pronounce my name correctly,” she said. (That’s WIT-ty).

She never lived there, though she’s taken a lot of photos with the sign out front.

What’s next for Witte? The communications major already has landed a full-time job in Minneapolis.