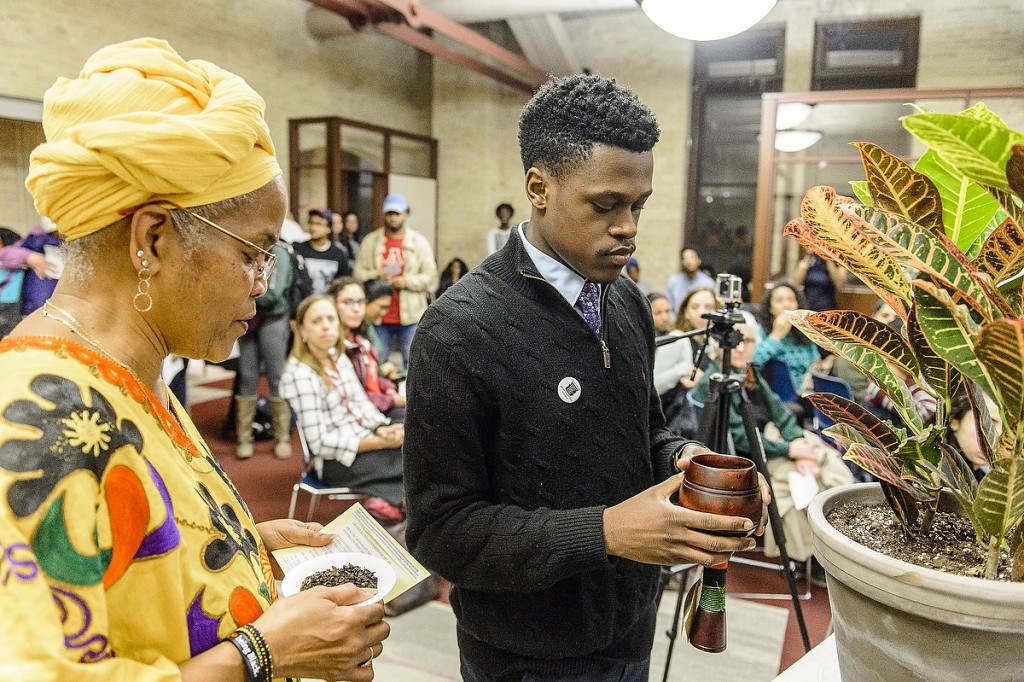 Hazel Symonette, left, program development and assessment specialist in the Division of Student Life, and Marquise Mays, right, chair of the Wisconsin Black Student Union, perform a libation pouring ritual in memory of those who have passed on during a dedication for the new Black Cultural Center at the Red Gym. Photo: Bryce Richter

For several months, Marquise Mays avoided even glancing at the construction of the new Black Cultural Center inside the Red Gym on the UW–Madison campus.

Mays, a junior from Milwaukee and president of the Wisconsin Black Student Union, said he wanted his first look to be special, free of any preconceptions.

He also wanted to experience the moment alongside the many classmates, faculty, staff and alumni who had long sought the center and had worked to see it come to fruition.

That moment arrived Tuesday with a dedication of the 2,300-square-foot space attended by about 150 people. 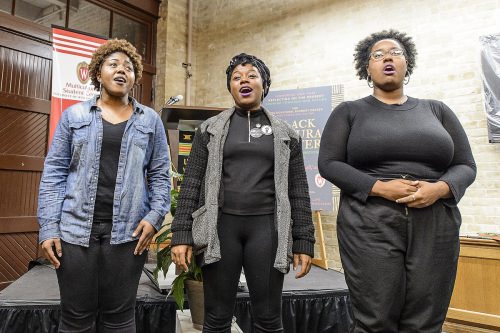 Nikeya Bramlett, Deja Mason and Bobbie Briggs, members of the University Gospel Choir, perform before a crowd of more than 100 at the new Black Cultural Center. Photo: Bryce Richter

“This center will be a place for people – not just black people, but the whole UW community – to learn about the vast contributions of black students to this university,” Mays said.

The event coincided with the final day of Black History Month and included a libation ceremony, a ritual pouring of water to honor those who have come before. Members of the University Gospel Choir performed. 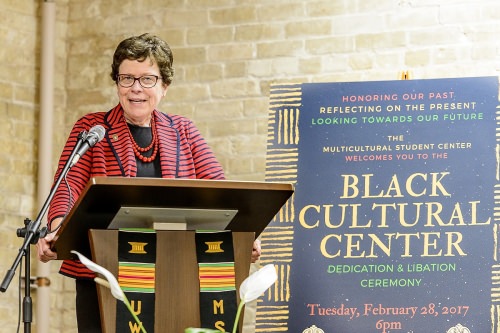 “It is difficult to imagine a more fitting way to close African-American History Month than by opening a space – even if it’s not quite open – that will invite us to reflect, all year round, on the rich array of contributions of African-Americans to this campus over its history,” said Chancellor Rebecca Blank, who welcomed the crowd.

Renovations of the space are about 70 percent complete and the center is expected to become usable in a few weeks. A grand opening is anticipated in early May.

The Black Cultural Center (BCC) is located on the first floor of the Red Gym, 716 Langdon St., in space that most recently housed the International Academic Programs’ Study Abroad Resource Center, now on the third floor.

Patrick Sims, vice provost for diversity and climate, told the crowd the center will serve as a formal venue for programming, community organizing and academic activities related to black culture and other culturally appropriate uses. 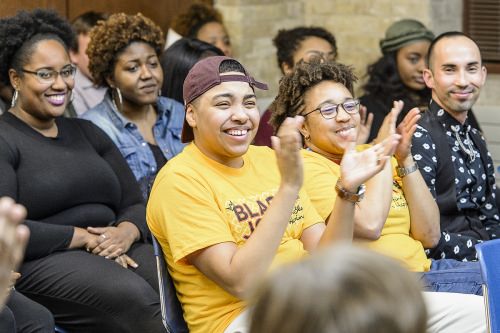 “This space will provide another opportunity for cross-cultural programming, with a twist that is distinctly black,” he said. “I encourage our students to continue to invest in growing the BCC – meaning the role that it will play in the larger context for this campus and the multicultural community in general.”

The center will include a lounge, collaborative work areas, computer work stations and space to showcase art. It is adjacent to a new 25-seat classroom that can be reserved for use by the center and others in the building. A visual timeline will honor the contributions of black students to the university.

“The center is a physical indicator of the university’s commitment to students of color, specifically black students,” said Gabe Javier, assistant dean of students and interim director of the Multicultural Student Center. “Students of color here exist in a predominantly white institution, so the ability to see themselves and to understand the history of people who look like them and who have had similar experiences is vitally important.”

A full-time coordinator will be hired to run the center, with other positions filled by students, Javier said. Students have been involved in helping to shape the center and its programming, including serving on the center’s advisory board. 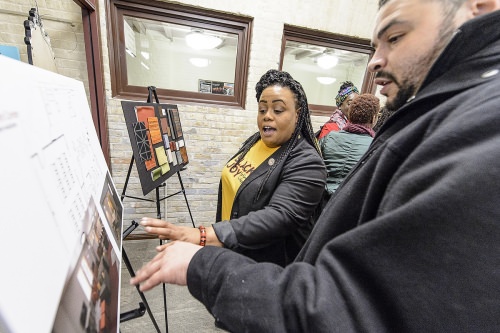 Karla Foster, campus and community liaison for the Pathways to Educational Achievement and interim program coordinator for the Multicultural Student Center, discusses design plans during the dedication. Photo: Bryce Richter

Breanna Taylor, a junior from Milwaukee who serves on the Black History Month Planning Committee, said in an interview that the center is needed to showcase the “full scale of blackness on campus.” The center will reenergize black-identifying students, allowing them more control over how they are represented on campus, she said.

The university opened an Afro-American and Race Relations Center in the late 1960s in response to demands by black students. The university closed the center in 1973, saying at the time that, due to a decision by the Board of Regents, campuses could fund only multicultural programs, not ones focused on specific races or ethnicities. The closing of the center led to more protests.

The latest push from students for a new center heightened in 2015 and continued through last year following a series of bias-related incidents. Chancellor Blank agreed with the need for the center, making its creation one of several priority initiatives to improve campus climate.

“Knowing this history – that courageous, brave and very resilient black students already went through this – makes this space even more meaningful,” said Mays, the Black Student Union president. “We know that we are part of that legacy of creating and fostering space for ourselves.”