“Don’t sit back and wait for good things to happen,” Levitan tells grads 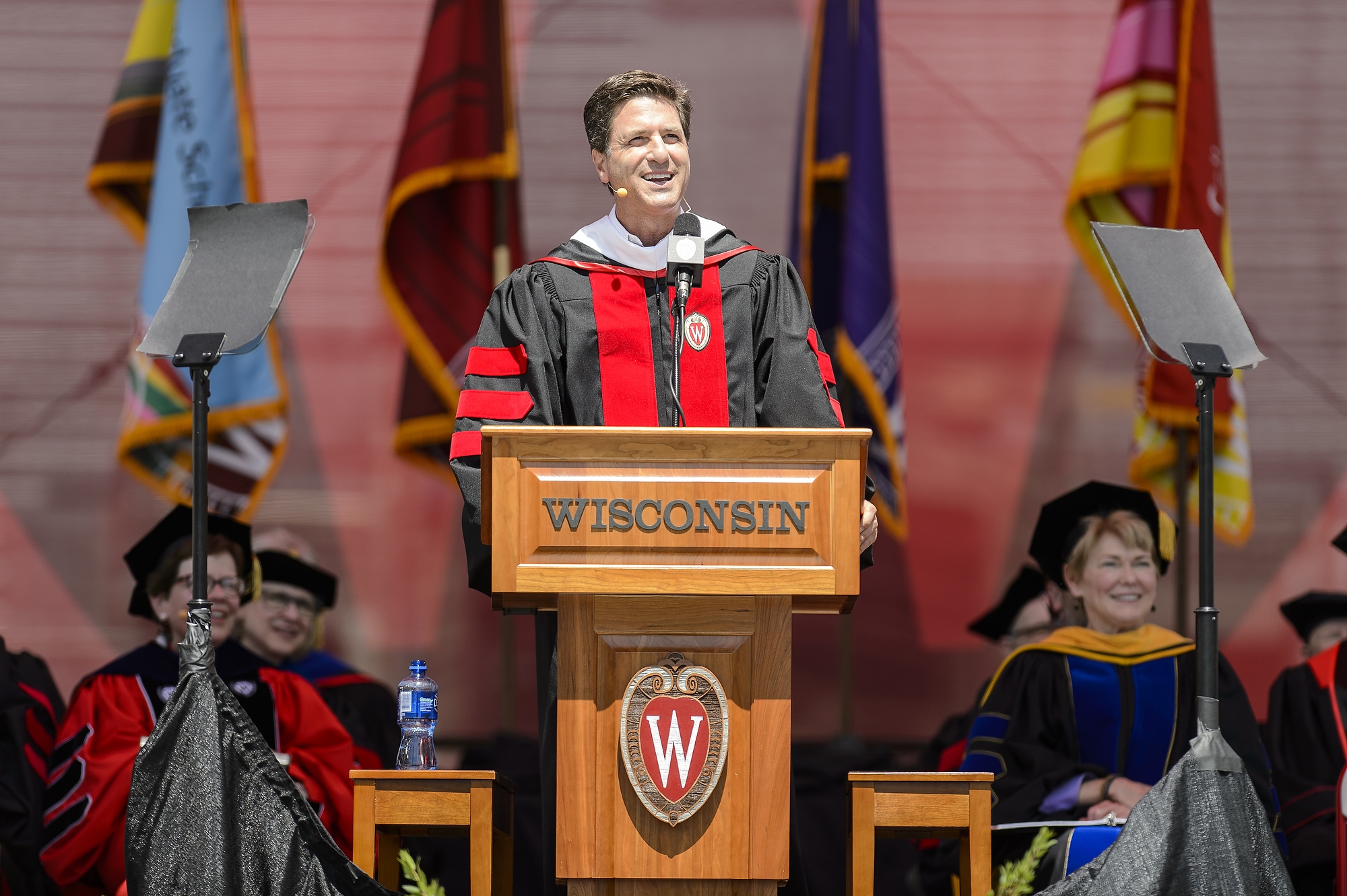 Award-winning television producer Steven Levitan, a 1984 graduate, tells students, “As you sit here today, with an amazing education from one of the finest universities in the world, that is what I wish for you: The happiness, the confidence, the feeling of self-satisfaction that comes from leaving nothing on the table.” Photo: Bryce Richter

For many UW graduates, Saturday brought to a bittersweet close their time in Madison.

But OMG, what a sendoff.

A dazzling Camp Randall Stadium, built a century ago, showed that 100 is the new awesome. Keynote speaker Steven Levitan opened strong, then got only funnier. And that weather – tons of sun, temps around 70, and a gentle breeze that fluttered tassels.

“The whole day has been surreal – we finally made it,” said Lauren Gustafson of Bloomington, Minnesota, who earned a bachelor’s degree in biology.

Saturday’s total audience of 42,000 included parent Heidi Jasso of Milwaukee, who had never been to Camp Randall and arrived at 8:30 a.m. for the noon ceremony to get a good seat. She wore a tour T-shirt for the rock band Nirvana, which pretty much summed up her state of happiness. She was supporting her daughter, Kalene Jasso, who earned a bachelor’s degree in life sciences.

“This is so huge for our family,” Heidi Jasso said. “She’s the first one in our immediate family to earn a degree. I get emotional just thinking about it.”

Chancellor Rebecca Blank invited graduates to remember the enjoyable moments on campus – ice cream on the Union Terrace, back-to-back trips to the Final Four – as well as the difficult ones – “moments that I hope have brought us together as a community to think about who we are, and how we want to live.”

She offered what she said were a couple of rules for success. First, ask the right questions – What do I love to do? What am I good at? Which of these choices will help me to come closer to the person I want to be? – then push your boundaries, even when it scares you.

Levitan, a UW–Madison alum and co-creator and executive producer of the ABC hit comedy “Modern Family,” got laughs right out of the gate by thanking Provost Sarah Mangelsdorf for a colorful last name that “makes me feel like I’m at the commencement for Hogwarts.”

He earned the most sustained cheers by saying he wasn’t going to resort to typical commencement clichés like “follow your dream.”

“I’m not going to do that because I don’t know your dream,” he said. “Your dream may be stupid.”

Instead, Levitan offered several pieces of advice, prefaced by a photo from his own graduation ceremony at UW 33 years ago. He was wearing only shorts under his gown, he said, and “holding a bottle of champagne, as if to say, ‘Hey world, lower your expectations!’” 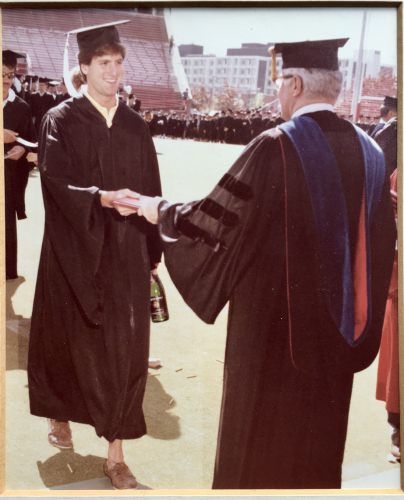 Levitan would go on to accomplish great things in television, but there were many ups and downs, he said, including a dry spell from 2000 to 2008 during which nine shows he worked on failed. “Modern Family” broke that streak, leading Levitan to offer this piece of advice: “It’s hard to fail 10 times in a row.”

He also told graduates to roll the dice in their 20s, be calm in a crisis, and succeed and fail on their own terms.

Afterward, students raved, some calling it the best commencement speech ever.

“A perfect mix of humor and advice,” said Courtney Keefe, who earned a bachelor’s degree in biology.

In a final burst of Badger initiative, many grads elaborately decorated their mortarboards. Psychology and sociology graduate Ciara Bridges said she spent $40 and way too much time around super glue spelling “Young, Gifted and Black” in glittery letters on hers.

“I’m glad I already have my degree, because I killed a lot of brain cells doing it,” she said. Her grandmother from Chicago cheered from the stands – at age 95, just five years younger than the stadium.

Education graduate Anika Vittands, a student teacher at a nearby middle school, wore a cap signed by all 107 of her students. Nursing graduate Cristina Treviño wrote “Dreams Without Borders” on her cap and affixed a carnation in the colors of the Mexican flag.

“For us, as children of Mexican immigrants, there are a lot of obstacles to going to school,” she said. “I’m saying those obstacles can be overcome.”

Student speaker Martin Barron Weiss, senior class vice president, shared a deeply personal story of how the UW community embraced him during a dark time. As Weiss’s father was dying of brain cancer in 2014, someone burglarized the Zeta Beta Tau fraternity house where Weiss lived.

Among the items taken was a Star of David pendant that had survived the Holocaust and been handed down through the Weiss family ever since. Weiss said he received it from his father at age 13.

His fraternity brothers appealed to local news outlets for help in finding the perpetrator. Days later, a backpack full of the stolen goods showed up outside the fraternity house. The pendant was among the items returned.

“The outreach and support I received during this time was incredible,” he said. “As a Badger, you’re never alone. We’re poised to join a community of some 400,000 Badger alumni. Connect with them, reach out to them, and ask them for help! They will be there for you, just as you were here for me, and as all of us have been here for each other.”

Then he introduced “Jump Around,” and the graduates let loose with joy.