Soccer star Rose Lavelle says she always gets asked in interviews how her life changed after scoring a goal in the U.S. victory over the Netherlands in the Women’s World Cup Final last year.

Her answer, she says, is that it didn’t. While life’s big moments are often what’s remembered, it’s the work that went into them that means the most, she told UW–Madison winter graduates Sunday.

“That one moment didn’t make me,” said Lavelle, a UW–Madison alumna. “It was the years of commitment and dedication to the sport I love and all the people who helped along the way that made me into the player and person I am today.”

Lavelle shared several life lessons as keynote speaker for UW–Madison’s winter 2020 virtual commencement, at one point calling her alma mater “the greatest university to ever grace this planet.” (Read the list of graduates here.) Lavelle revealed that, like many of Sunday’s graduates, she finished her final semester in 2017 entirely online. An opportunity to start her professional soccer career with a team in Boston necessitated the change. For UW–Madison graduates, of course, a global pandemic was the reason.

“Sometimes we’re prepared for these moments, and other times they smack us in the face and hit us out of nowhere,” Lavelle said. 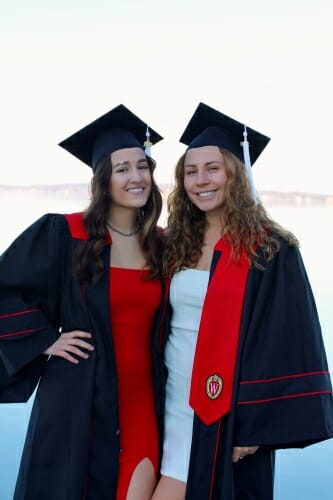 Winter graduate Giovanna Zizzo, who earned a bachelor’s degree Sunday in international studies, said the pandemic was part of the reason she chose to finish her studies in less than four years — COVID-19 “pushed” her into wanting to move on to the next stage of her life, she said.

Zizzo, of Milwaukee, Wisconsin, said she struggled with some aspects of college — “money, boys” — but ultimately found a path that worked for her. She’s now the first member of her family to earn a four-year college degree.

A few days before commencement, Zizzo took a photographic victory lap around a largely empty campus with fellow winter graduate Hannah Krupp, who earned a double-major in history and political science. The two met as roommates their freshman year at Witte Hall and remain close.

“Started together, finishing together. Full circle,” said Krupp, who watched the virtual ceremony Sunday with her family in Madison.

In her commencement remarks, Chancellor Rebecca Blank praised the nearly 3,000 winter graduates for overcoming great challenges to get to this moment. The pandemic will shape this generation, she said, just as wars and terrorist attacks shaped prior ones.

“And no matter what direction your work takes you, I hope you will carry with you a commitment to what we call the Wisconsin Idea — a commitment to use our knowledge, skills, and innovative ideas in ways that will improve people’s lives,” she said. 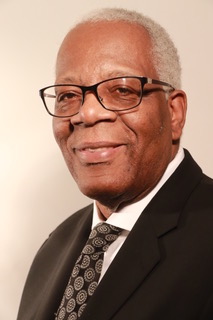 John Felder, Sunday’s alumni speaker, recounted how he and many of his fellow students advocated for change on campus five decades ago during the 1969 Black Student Strike. The strike led to the creation of the Afro-American Studies Department, which is celebrating its 50th anniversary on campus this academic year.

“It has fostered deeper understanding of our intertwined cultures,” Felder said of the department. “It continues to speak of our rich diversity. We are very proud of the role we played in this achievement.”

Felder’s remarks resonated with Vershawn Hansen, of Chicago, who earned a bachelor’s degree in neurobiology 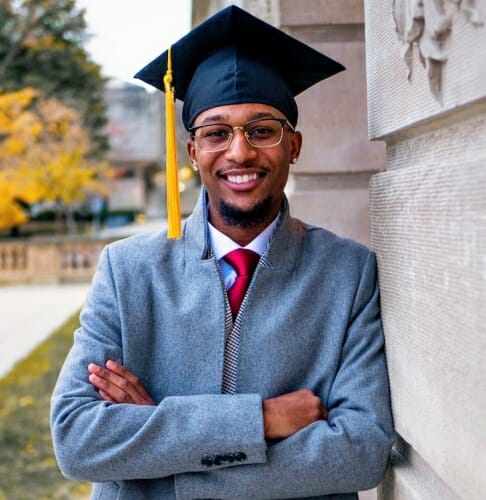 Sunday. Hansen was among the organizers last year of a new campus group called the Student Inclusion Coalition, which seeks to ensure that university administrators prioritize the safety and adequate support of students of color. Group members say they are carrying on the work Felder and other alumni began more than 50 years ago.

“This work is meaningful because the fight is much bigger than us,” says Hansen, who aspires to be a physician.

Given the necessity of a virtual ceremony, the university took several steps to make winter 2020 commencement special. Graduates were able to purchase “Bucky Boards” — photo cutouts of themselves to place in the seats at the Kohl Center. They could upload a selfie to a UW-themed virtual photo booth and set up watch parties on Facebook. As a special gift, any graduate renting or purchasing a cap and gown received a free celebration kit: a UW-branded face covering, a confetti popper and a refrigerator pennant magnet.

One group of students got really ambitious and designed an online virtual commencement experience. The software allows graduating Badgers to select avatars, type in degree information, and interact with a computer-generated Chancellor Blank while receiving a virtual diploma at Camp Randall. Participants can chat with each other and even dance to “Jump Around,” a tradition at Badger football games.

“Some of my friends who graduated last spring really missed the in-person ceremony and wanted an opportunity to connect more with others,” says senior Zhiyue Ding, a computer science and math major who will graduate in the spring. “I came up with this idea so that graduates could have at least some limited interaction with each other.” 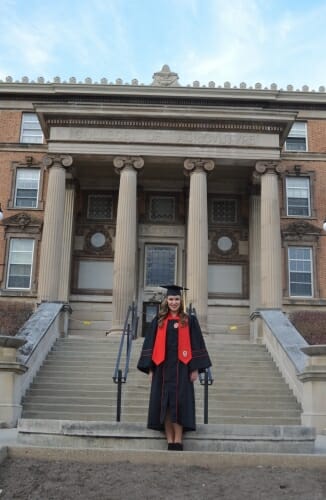 Ashtyn Gutzman on the steps of Agricultural Hall. Submitted photo

Ashtyn Gutzman watched from her home near Cambria, Wisconsin, about an hour north of Madison. The ceremony took her back to her first semester on campus and move-in day. She was a nervous farm girl from a small high school, unsure whether a big university would suit her.

“There were more people on my dorm floor than in my graduating class,” she said. “But it’s crazy how you build community at UW–Madison. So many of those people I met those first few days are still my best friends.”

This past year has been a momentous one for Gutzman. She finished her bachelor’s degree in agricultural business management and purchased a farm with her fiancé, now husband. A few days before commencement, she traveled to Madison in cap and gown and took photos on the steps of Agricultural Hall. She needed closure, a final goodbye, she said. The virtual commencement ceremony provided that, too.

“I still feel like we’re all together, though across the globe,” she said. “And that’s something UW–Madison has always provided.”