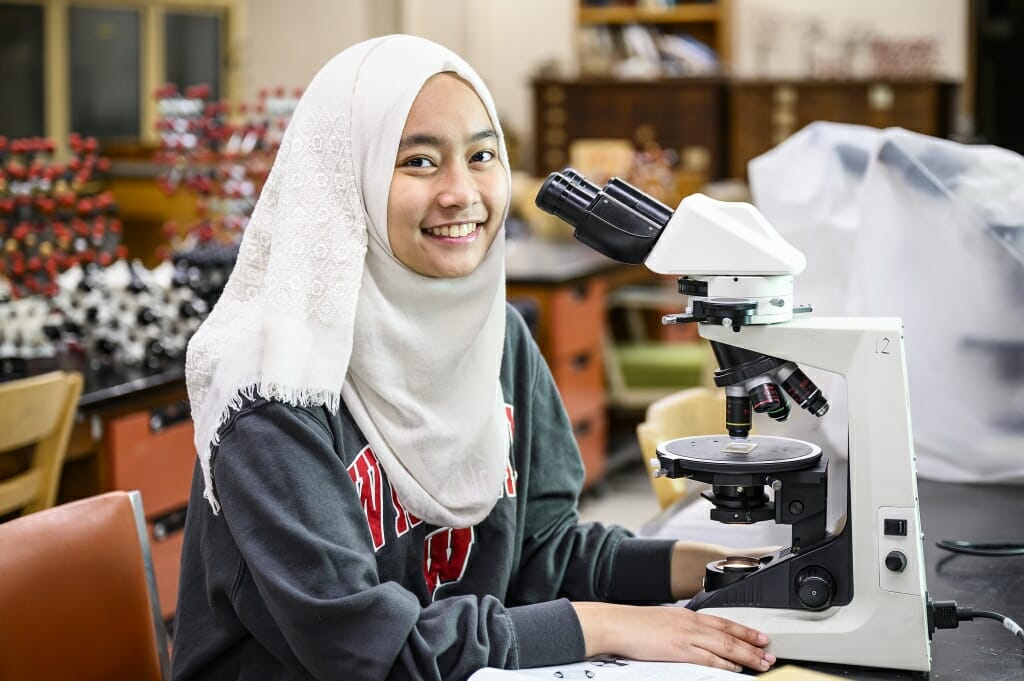 As a high school senior in Malaysia, Lisa Kamal excelled on the exit exam administered to all students by the government. Her high scores led to a coveted opportunity: a full-ride college scholarship funded by Petronas, an oil and gas corporation owned by the government.

“They really supported me and opened paths for me,” says Lisa, who will give remarks on behalf of the graduating class at winter commencement. “I owe the entirety of my college education to them.”

On its website, Petronas says it has awarded more than 36,000 education sponsorships since 1975 to nurture “the right talent that will ultimately contribute to the growth of the company and the nation.”

From a list provided by Petronas, Lisa (who uses her first name on second reference) selected geology as her top choice for a major, and she chose the United States as her preferred destination for study. Neither was guaranteed, so she was relieved when both came true. She was especially pleased to be accepted to UW–Madison. She’d heard good things about it from Malaysian friends already on campus.

As for geology, Lisa says she did not view it as an innate passion in the way some college students talk about their majors. “I didn’t consider it my calling,” she says.

Yet she was interested in it because she knew it meant she would get to study in the U.S., which had long been a goal. And she had known since high school that she likely would venture into a science field. In another life, she would have loved to major in English or the performing arts, she says, but given the funding obstacles, that wasn’t realistic.

“Petronas filled all my financial needs, and that was huge,” she says. “And to be able to study at this university has been an immense privilege. I tried to embrace every opportunity that came my way.”

Geoscience Professor Laurel Goodwin was surprised to learn that Lisa didn’t consider geology her calling. “She dove in anyway and ended up both defining a very personal path to success and setting an example for fellow students.”

Beginning as a freshman, Lisa has been a student worker for the Wisconsin Geological and Natural History Survey, part of the UW–Madison Division of Extension. She won the Lowell R. Laudon Outstanding Junior Scholarship Award from the Department of Geoscience and an “On To the Future” award for underrepresented students in geosciences from the Geological Society of America.

Laurel Goodwin, a professor in the Department of Geoscience, recounts how Lisa chose to take a very challenging graduate-level course in electron microprobe analysis, even though she was the lone undergraduate to do so. Lisa’s astute observations formed the foundation for a research project with John Fournelle, a UW–Madison senior scientist and a world leader in microanalysis. She was awarded a 2019 Hilldale Undergraduate Research Fellowship, the university’s top research grant, to pursue the project.

Goodwin says she was surprised to learn that Lisa didn’t initially consider geology her calling.

“She dove in anyway and ended up both defining a very personal path to success and setting an example for fellow students,” Goodwin says.

Geology has been a fulfilling major, Lisa says. “I really appreciate it as a field and the perspective it has given me when thinking about the world — quite literally the Earth,” she says.

During her commencement talk, Lisa plans to discuss coping mechanisms. College was difficult at times, she says. She intends to be upfront with her fellow graduates about that.

Outside of her major, she explored her creative side through dance classes, her favorite electives. She sang, danced and acted in theater productions as part of Malaysian Night, an annual cultural celebration that she helped reinvigorate as an officer with the Malaysian Students Association. Last spring, she co-wrote and acted in a play performed at Malaysian Night and set during the 2018 Malaysian general election. She also made a music video on a frozen Lake Mendota with some of her Malaysian friends.

Lisa says she auditioned to be the student speaker for winter commencement because she believes she has something to say about keeping an open mind and adapting to one’s circumstances. All winter graduates were eligible to apply for the speaking position. The senior class officers selected the winner. Winter commencement will be Dec. 15 at the Kohl Center.

During her commencement talk, she plans to discuss coping mechanisms. College was difficult at times, she says. She intends to be upfront with her fellow graduates about that.

“Listing my accomplishments would not accurately reflect the entirety of my college experience,” she says.

On this subject, Lisa says she was inspired by last year’s senior class president, Ron Steinhoff, who spoke candidly at spring commencement about the highs and lows of his college experience and how he sought mental health counseling for anxiety. Lisa says she, too, struggled with anxiety, as well as homesickness. She wants to destigmatize mental health services.

“I’ve been going to mental health counseling at University Health Services since my sophomore year,” she says. “I would not have gotten through college without those free services for students.”

After commencement, Lisa will return to Malaysia and begin a five-year work commitment with Petronas.

“Going forward, I want all of my fellow graduates to be able to look back and be proud of all they’ve achieved and be proud of what it took to get to the finish line,” she says.