Amy Wendt, professor of electrical and computer engineering, has been named associate vice chancellor for research in the physical sciences in the Office of the Vice Chancellor for Research and Graduate Education. Wendt had been serving in an interim capacity since August 2019. 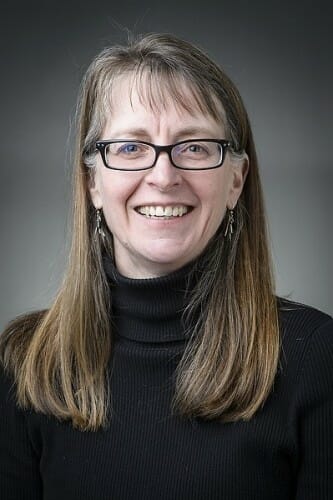 “Amy brings experience as a researcher and campus leader in a spectrum of roles at UW–Madison,” says Steve Ackerman, vice chancellor for research and graduate education. “In her interim role, during the COVID-19 pandemic Amy served on committees coordinating campus COVID response. She has helped lead efforts to maximize research operations during a campus shutdown and determine how to minimize losses of research specimens and instruments. More recently, she has led our efforts to safely bring back limited research operations.”

Wendt received her Ph.D. in electrical engineering and computer sciences at UC Berkeley in 1988. She came to the UW as a postdoctoral researcher in 1988, joined the faculty in 1990, and has held appointments continuously since then. She has been involved with the Women in Science and Engineering Leadership Institute (and co-director since 2007), co-chair of electrical and computer engineering from 2005 to 2009, and was on the University Committee from 2014 to 2017 (chair 2016-17).

“Exciting research opportunities in a pioneering cross-disciplinary research center are what first drew me to UW–Madison,” Wendt says.

Wendt’s early research focus was in fusion energy, a field that took off in the 1950s due to the prospect of using plasmas to develop nuclear fusion as a clean source of electrical power.

“My interest in fusion energy experiments as I entered college in the late 1970s inadvertently led me into a field in which women were simply absent at the time, and in which they continue to be severely underrepresented today,” says Wendt. “My unintended role as a trailblazer has led to a career-long pursuit of diversity in STEM.”

Wendt’s current research is on plasmas used in materials processing, critical to the fabrication of computer chips found in every electronic device today.

Wendt also champions the targeted research initiatives supported by the OVCRGE as a way to help to build campus strength in emerging areas and supports an investment in graduate students and postdocs on campus.

“My unintended role as a trailblazer has led to a career-long pursuit of diversity in STEM.”

“In the physical sciences, students and postdocs play critical roles in realizing our research visions, as they mature into independent researchers themselves,” she says. “One goal I have is to provide positive experiences and respectful research environments for all of our trainees, ones that support professional development beyond lab skills and that celebrate the diversity of their members and the role of diverse perspectives in achieving research excellence.”

Wendt recognizes that research is at the heart of what makes UW–Madison a great institution of higher education.

“I’m excited by both the existing UW strength in supporting multidisciplinary research and the opportunity to employ topical initiatives as a means to cultivate new partnerships that facilitate advances in physical sciences research that are mindful of human impact as it applies to individuals and society more broadly,” Wendt says.