In recognition of a career defined by innovation, Carl E. Gulbrandsen, managing director of the Wisconsin Alumni Research Foundation (WARF), will be honored with the In Business “Lifetime Achievement Award.”

The honor will be highlighted in the February issue of In Business magazine and be part of a reception featuring the state’s top executives Tuesday, Feb. 16, from 4 to 6:30 p.m. at the Overture Center for the Arts.

Gulbrandsen has served as managing director since 2000 and is slated to retire this year. His tenure has seen WARF increase grant support for UW–Madison, expand its entrepreneurial mission throughout the state, and chart scientific milestones from embryonic stem cells to life-saving vaccine research. 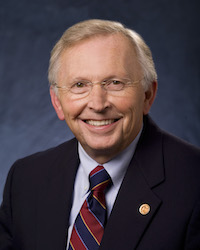 “Carl is a top chief executive,” says Peter Tong, president of the WARF board of trustees. “His accomplishments over 18 years have been transformational for WARF. He has put a superb team in place that helped make WARF one of the top technology transfer organizations in the world and a leading innovator in investment management.”

Under Gulbrandsen’s leadership, the WARF endowment has doubled to more than $2.6 billion.  Since 2000, WARF has gifted $895 million to UW–Madison.

To advance startup activity on and beyond campus, he helped spearhead new programs including Discovery to Product (D2P), the UpStart program for women and minority entrepreneurs, and 4490 Ventures — a local venture capital firm focused on technology.

Gulbrandsen was instrumental in the creation of the WiCell Research Institute — a globally renowned stem cell bank — as well as WiSys Technology Foundation and the multidisciplinary Morgridge Institute for Research housed in the Discovery Building.

When he announced his retirement last spring, Gulbrandsen said joining WARF and serving the university “is the best professional decision I ever made.”

“I’m humbled by this recognition,” Gulbrandsen says. “The opportunity to lead WARF — a foundation that supports our great UW–Madison and the great research and innovation it produces — has been a distinct privilege.”