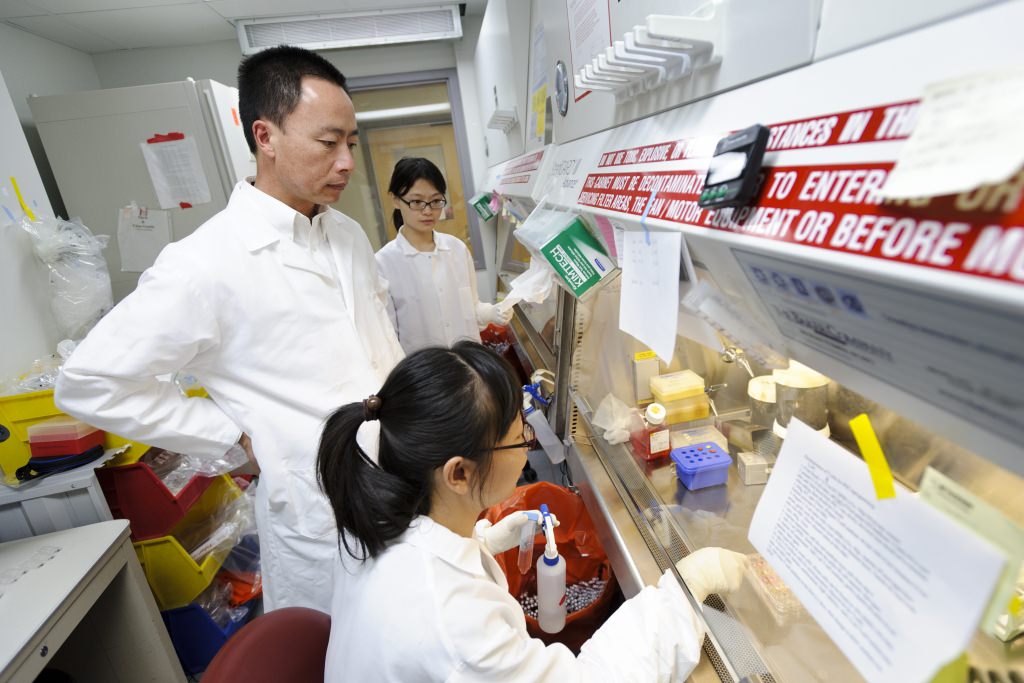 Su-Chun Zhang, left, talks with his staff as they prepare stem cell cultures at UW–Madison’s Waisman Center. Zhang, a professor of neuroscience in the UW School of Medicine and Public Health, has been awarded a UW2020: WARF Discovery Initiative grant to advance the study of Parkinson’s disease. Photo: Jeff Miller

Fourteen research and infrastructure projects with the potential to transform robotics, cancer treatment, data science and more have been selected by the University of Wisconsin–Madison Office of the Vice Chancellor for Research and Graduate Education for support from the UW2020: WARF Discovery Initiative.

Reviewers chose from nearly 120 proposals outlining early-stage studies and investments in instruments and equipment aimed at providing important momentum to interdisciplinary research that could soon merit more attention and outside funding. The award recipients are the second set of UW2020 awardees, following 14 awards announced in April. In the second round, UW2020 provides an average award of about $360,600 over two years for the successful proposals.

“This group of UW2020 proposals illustrates the depth of our faculty’s commitment to innovative research,” says Marsha Mailick, UW–Madison vice chancellor for research and graduate education. “We believe that these projects will make a lasting impact by improving lives and expanding our understanding of the natural world.”

Some research programs will also receive support from the UW–Madison Graduate School to cover a graduate student assistantship. Two projects are partially supported by the University of Wisconsin Carbone Cancer Center.

UW2020 was underwritten in its first year by the Wisconsin Alumni Research Foundation (WARF) with combined funding from other sources to launch this program.

“WARF is pleased once again to support highly innovative, early stage research and scholarship, and new infrastructure projects that have the potential to fundamentally transform fields of study and improve the chances of future extramural funding,” says Erik Iverson, WARF managing director.

Research projects include efforts to grow new neurons to foil Parkinson’s disease and approaches to expand children’s vocabularies to make them better students. Awards will also fund equipment for big-data analysis, for watching the internal workings of a living cell and for recording electronic music that will aid scholars across campus.

The projects were reviewed by faculty from across the university. Final selections were made by the UW2020 Council, a group of 17 faculty from all divisions of the university. They evaluated the merits of each project based on the reviews and their potential for making significant contributions. Funded projects include 105 faculty and academic staff investigators from eight schools and colleges.

The UW2020 research and infrastructure/equipment projects are: