UW-Madison technology enlisted in battle against hepatitis B 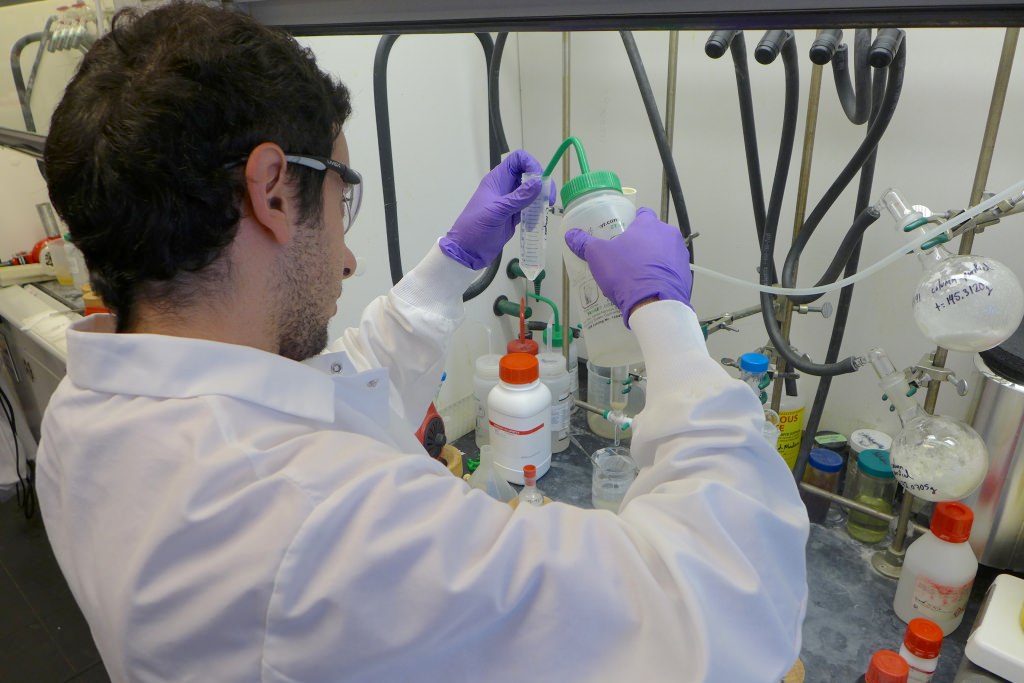 Alex Amatuni, a UW–Madison intern, performs a chemical synthesis at Arrowhead Pharmaceuticals. Arrowhead’s method was invented by a company spun off from discoveries made at the university. Photo: David Tenenbaum

A method for “silencing” RNA that emerged from a University of Wisconsin–Madison spinoff company is in clinical trials in Europe, Asia and the United States against hepatitis B, an infection that can destroy the liver.

When RNA is silenced through RNA interference, or RNAi, the genes that cause disease are inactivated. Theoretically, the technique could cure viral or genetic disease.

The silencing technique being used by Arrowhead Pharmaceuticals was invented at Mirus Bio, a spinoff from the UW–Madison Department of Pediatrics lab of Jon Wolff, and was shown to be effective using technology licensed from the Wisconsin Alumni Research Foundation. 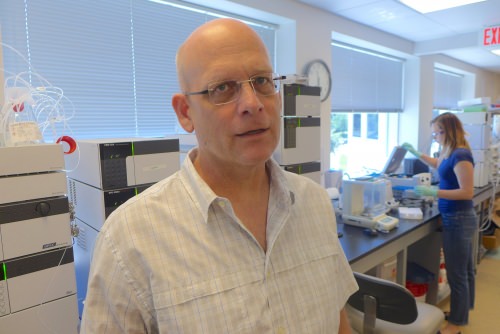 Hepatitis B can be prevented by vaccine. Even among those who are not vaccinated, the immune system usually clears the infection. But in 10 percent of cases, “the virus produces proteins that dampen the immune response, allowing those infections to become chronic,” says David Lewis, chief scientific officer at Arrowhead Pharmaceutical’s research facility in Madison.

Arrowhead is in the midst of a private stock offering aimed at raising $45 million to advance the hepatitis B drug and another aimed at treating a rare, hereditary liver and lung disease called alpha-1 antitrypsin deficiency.

About 340 million people worldwide, including 2 million in the United States, have a chronic hepatitis B infection that can result in liver cancer or a loss of the liver’s essential metabolic functions.

The research facility in Madison is owned by Arrowhead Pharmaceuticals of Pasadena, California. “Our strategy,” Lewis says, “is to use RNAi to decrease the production of the viral proteins that weaken the immune system, allowing it to recover to the point that it will be able to clear the virus like it does in the other 90 percent of people who become infected.” 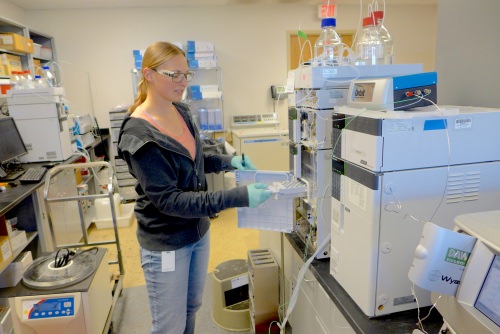 DNA operates through RNA, and when RNA interference was discovered in 1998, it seemed like a magic bullet that could fight disease by specifically shutting down problematic genes. That promise was difficult to achieve, and no FDA-approved RNAi medicine has yet reached the market, although two are in the final phase of clinical trials.

In general, the short strands of designer RNA used in RNAi either target the unwanted RNA for destruction, or clog it up so it can’t produce a protein. The process by which RNAi splits messenger RNA, is a “natural process,” Lewis says. “Almost all cells have this capability. It’s another level of control over gene expression.”

During the early development of RNAi, the short strands of RNA that were injected into the body usually were excreted, producing no benefit. The result was “very expensive pee,” Lewis says.

But when Lewis and others at Mirus invented a system to connect the strand of RNA to a molecule that could lock onto liver cells, the door seemed open to finding a strategy for RNAi, at least in liver disease.

RNAi seemed so promising that pharmaceutical giant Hoffmann-La Roche bought Mirus’ RNAi division in 2008, although it left the lab in Madison. Within three years, Roche changed its mind and sold the business to Arrowhead, which likewise left the research and development in Madison. Arrowhead now employs 90 at University Research Park and in Middleton.

About 340 million people worldwide have a chronic hepatitis B infection, which can result in liver cancer or a loss of the liver’s essential metabolic functions.

Lewis learned about RNAi while working in the lab of Sean Carroll, a UW–Madison geneticist who studies the genetic controls that give animals their characteristic body structures. “Sean wanted to know how genes used in the butterfly wing could make different patterns, and so he wanted to manipulate where the genes are expressed,” Lewis says. For his postdoctoral project, “I expressed these genes in the wrong places, or knocked them down with RNAi to see their effects.”

Lewis, who worked on the technology to target liver cells at Mirus, moved to Roche and then to Arrowhead.

The company is also developing other RNAi drugs, including some for a cardiovascular condition, but most of its effort is going toward phase 2 (dosing level) trials for hepatitis B. It’s a complex task, Lewis says. “Every country has its own regulatory requirements, and it’s truly a massive effort to file all those applications in over a dozen countries.”

The hepatitis drug is being tested at different dosing schedules, sometimes in combination with other antiviral drugs, Lewis says.

“This drug will not, by itself, clear the virus,” he stresses. “That’s the job of the immune system. Even if they still have viral DNA hiding somewhere, now the immune system can recognize a cell that produces viral antigens and destroy it.”