Hajjar Baban began finding her voice as a writer the way many people do, recording her thoughts in a private journal. Then one day, as a high school sophomore, she searched online for a poetry slam near her suburban Detroit home.

Though nervous, she performed one of her poems and placed second overall.

“Looking back, I’m really glad my younger self found a platform where I could speak without worrying about someone questioning the weight of my experiences or my place in the poetry scene,” said Baban, 18, a freshman at UW–Madison. 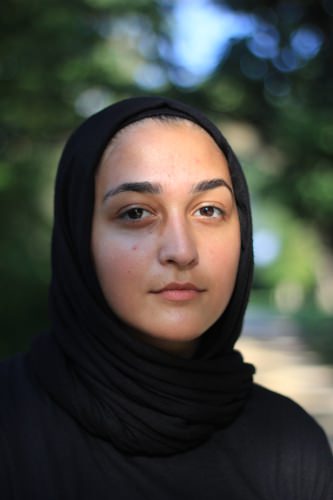 Many poems and public performances later, Baban is one of two finalists for the inaugural position of National Youth Poet Laureate. The title will be bestowed for the first time on April 26 by the literary arts organization Urban Word and leading national poetry organizations. New York City Mayor Bill de Blasio will announce the winner at his residence in the presence of both finalists.

Baban, of Dearborn, Michigan, said the process leading up to this point has been so rewarding creatively that she hasn’t been thinking about the competition aspect. She attends UW–Madison as part of UW–Madison’s First Wave Spoken Word and Hip Hop Arts Learning Community, a multicultural program that brings young artists together to live, study and create.

Baban is majoring in English, with an emphasis on creative writing and poetry. She came to the U.S. with her family from Pakistan at age 2. Her mother is Afghan, her father Kurdish.

Her work explores many themes, including how migration shapes lives on both a personal and very broad level, and how being displaced manifests itself in ideas of family and home.

“Whether I want it or not, my being a first-generation refugee and a child of immigrants is a very big part of my identity,” she said. “I’m visibly a Muslim woman, and I think that affects me more than just on my own spiritual level. I definitely understand how others see me. My hope is that there are a lot of nuanced things in everybody’s identities that can be seen in my writing.”

Baban credits Citywide Poets, an after-school writing program in Detroit, with nurturing her talent and boosting her confidence. The writing program’s parent organization nominated Baban to be Detroit Youth Poet Laureate, a post she currently holds. The role began her progression to the national title.

The national title is a new initiative this year. The other finalist is Amanda Gorman of Los Angeles.

As a finalist, Baban submitted a 40-page manuscript of her poems and is developing a video project called “I’m Not Traveling Alone,” in which people of color from across the globe discuss their experiences as immigrants in the U.S.

“I see it as a more unrehearsed and candid snapshot of what I talk about in my poetry,” Baban said.

Amaud Jamaul Johnson, a UW–Madison English professor and First Wave’s faculty director, said Baban’s concern for others drives her work, and that she is trying, through her art, to bridge the growing divide in this country.

“Beyond poetry, what impresses me most about Hajjar is her willingness to be vulnerable despite a rising tide of ignorance, suspicion, and cruelty toward Muslim-Americans in our culture,” he said. “Her work is honest. She’s not afraid to challenge herself as she challenges her peers.”

“Hajjar’s writing reminds us that we are all world citizens, and that as such, we cannot afford to disregard the narratives of the displaced, particularly war refugees—a population I count myself among—no matter how uncomfortable these stories make us,” she said.

Baban is one of 14 UW–Madison freshmen in this year’s 10th cohort of First Wave scholars. The program is administered by the Office of Multicultural Arts Initiatives within the Division of Diversity, Equity & Educational Achievement.

“We continue to recruit the cream of the crop in terms of young artists from every corner of America,” said William Ney, the program’s founding executive director.

Baban said First Wave has been a tremendously rewarding experience. Her teachers, mentors and fellow students are all helping her develop as an artist, she said.

“In choosing a place to be, I don’t think anything means more than the connections you make with other human beings, especially other people who’ve been through what you’ve been through and who are constantly working on their art,” she said.