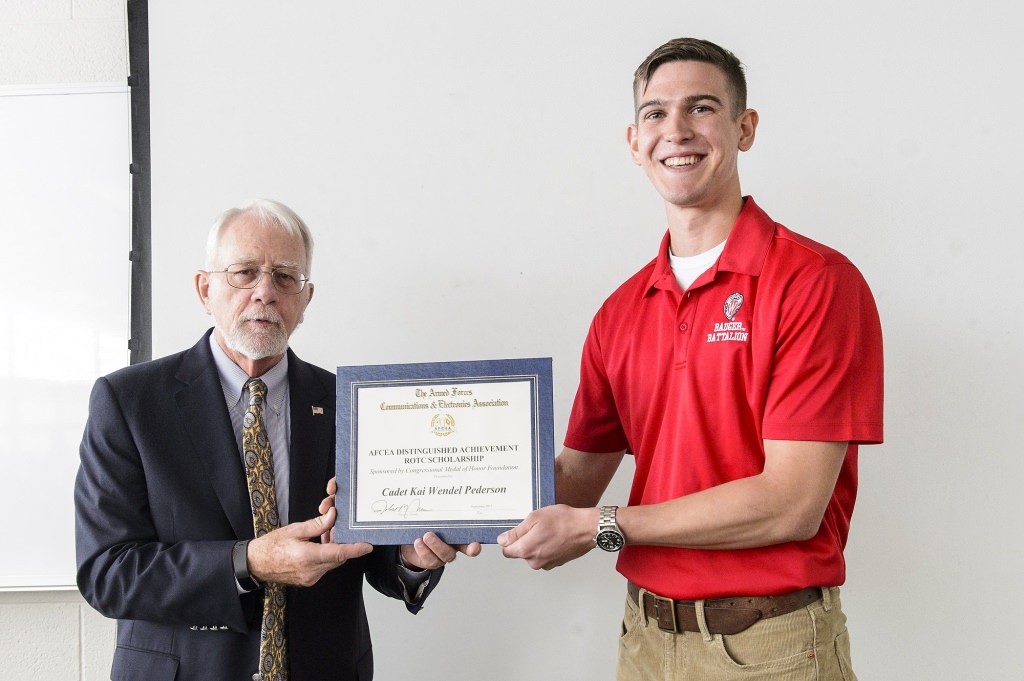 Kai Pederson does not come from a military family, yet somewhere around middle school, he began to feel a strong pull toward Army service.

“I wanted to serve my country in any way I could,” he says. “I just felt it was my turn to step up.”

He stepped up, and then some.

On Aug. 30, the Army ROTC cadet, a junior at UW–Madison, was awarded a prestigious Distinguished Achievement Scholarship from the Congressional Medal of Honor Foundation, in partnership with the Armed Forces Communications and Electronics Association.

The foundation gives out just eight scholarships annually — two go to Army cadets, two to Air Force, two to Marines, and two to Navy. Four of the eight are called Distinguished Achievement Scholarships and are worth $4,000 each. They recognize cadets who have excelled in leadership, academics, fitness and community service.

This is the first time in the 12-year history of the scholarships that a UW–Madison cadet has been an award recipient, according to foundation President and CEO Ronald Rand, who presented Pederson with the award during a ceremony at Engineering Hall. Hundreds of cadets apply for the scholarships each year, he said.

Rand, a retired U.S. Air Force brigadier general, praised Pederson on many fronts but said he was especially moved by the cadet’s weekly Saturday tutoring of students at Madison East High School.

“That’s a real community service he provides,” Rand said. “He gives of his own time to do that.”

Rand joked that Pederson’s cumulative GPA of 3.78 is “almost twice my GPA when I graduated from college.”

“There is no wasted effort with that young man,” he said.

Pederson, of Waconia, Minnesota, is studying electrical engineering, computer sciences and math and is the first cadet from Madison to participate in the West Point Cyber Leader Development Program. The program seeks to identify and develop cyber leaders.

Pederson says he grew up dismantling and assembling computers as a hobby and wants to use his cyber skills to make the country safer. He’s already helping the university be more secure — he works for the UW–Madison Office of Cybersecurity, protecting university information.

Of his community service at East High School, Pederson says it’s a highlight of his week.

“I love to take what I’ve learned in class and immediately turn around and put it into practice to help these students,” he says.

About 80 of Pederson’s fellow ROTC cadets joined him for the award ceremony, as did his father, mother and stepfather.

Lt. Col. Katie Blue, who oversees the Army ROTC program at UW–Madison, said Pederson is an example of the caliber of students the ROTC program helps attract to the university.

“From Day One, Kai stood out for his confidence, curiosity and character,” she says.

This school year, Pederson will serve as company commander, shouldering responsibility for all cadets in the battalion.