HaoYang (Carl) Jiang has made astounding progress toward “The American Dream.” His journey, though, has been arduous.

An immigrant from China at age 5, Jiang found himself alone and homeless as an adolescent. Public education and the support of friends and teachers saved him, he says, putting him on a path that led to the University of Wisconsin–Madison. He graduated Phi Beta Kappa in 2014 with a bachelor’s degree in political science and philosophy.

Now, as a first-year law student at Yale, Jiang has been named one of 30 recipients of the 2018 Paul & Daisy Soros Fellowships for New Americans. The award, which comes with a $90,000 scholarship for graduate school studies, recognizes outstanding immigrants and children of immigrants who have the potential to make significant contributions to U.S. society, culture or their academic fields. 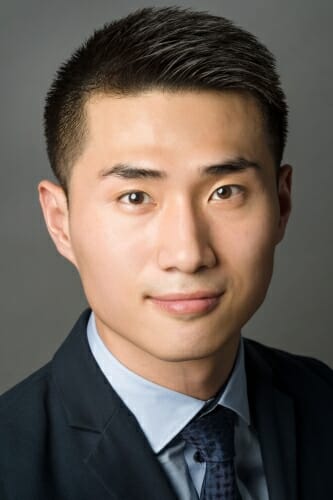 Jiang was selected from a pool of 1,766 applicants.

“It’s an incredible honor,” he says. “I am grateful to Paul and Daisy Soros for seeing the word ‘immigrant’ as not a slur but as a label of courage. While there are some that seek to impugn us as criminals and burdens on society, the Soroses recognize our potential to contribute to this country. No matter our nations of origin or ethnic heritage, we are Americans, too.”

Jiang says his father sought political asylum by fleeing China with his two children. Jiang’s parents already had parted ways by then.

When his family arrived in Los Angeles, Jiang says they had an advantage many immigrant families lack: money. His father had owned a construction company in China and was able to provide his children with a tutor to learn English. His father enforced a strict academic regimen, believing that education was the only path to a stable job, a house, and happiness. Jiang endured a daily three-hour reading session along with constant vocabulary and math quizzes. He looks back with mixed emotions.

“I was certainly quite privileged to have access to private English tutors at a young age. And while the approach my father took was harsh, I definitely fell in love with learning because of it,” he says. “It allowed me to excel and find refuge in school in ways other, less-privileged students couldn’t.”

Jiang would draw upon that resilience when his family fell apart. The wealth they once had quickly dissipated, as his father went from owning a construction company in China to being a construction worker in the U.S. His father worked hard “but was plagued with many demons,” Jiang says, including depression and addiction. His father’s hopelessness caused him to be unable to care for his children.

At 15, Jiang found himself alone in Chicago, where the family had relocated from Los Angeles. While Jiang had experienced occasional homelessness since adolescence, his situation grew increasingly worse, with his only meals coming for free at school.

“The American Dream seemed far from my reach,” he says.

He revealed his plight to his high school debate coach, Jenny Nolan, who became his foster mother and helped him gain permanent residency in the U.S.

“She showed me how a caring adult could change a young person’s life,” he says. “I would not be here today without her.”

Jiang threw himself into high school AP and honors classes. Having heard good things about UW–Madison, he applied and earned a full ride through a combination of public and private financial aid. During his time on campus, he found a strong community at the Multicultural Student Center and through his participation in the university’s mock trial team. He was active in the Asian American Student Union, serving as Education Chair his senior year.

He experienced a political awakening at UW–Madison, which he wrote about in his application for the Soros award.

“When I began my studies at the University of Wisconsin–Madison, I believed I had finally achieved the elusive American Dream,” he writes. “Yet I soon realized that dream has always been an illusion for most people who looked like me and shared a similar background. I heard the terms ‘urban poor’ and ‘systemic racism’ for the first time in a class called ‘A Politics of Multicultural Society.’ There, I learned how immigrant communities of color have been discriminated against and marginalized since the founding of this country. As I sat in classrooms of mostly white students and experienced micro-aggressions of my own, I studied how these injustices continue in the disparate outcomes of our own schools and courts today.”

This knowledge, coupled with his foster mom’s devotion to at-risk students, inspired him to become “an agent of change,” Jiang says. Once he completes his law degree, he intends to return to Chicago and, using a restorative justice approach, work to reform the methods by which youth and adults get sentenced and incarcerated.

Jiang says his early struggles taught him self-reliance and independence. Yet he recognizes that he would not be where he is without the mentors, peers and public safety net that pulled him through hardships.

He also is adamant about the privileges he experienced as an East Asian male fluent in English.

“I benefited from the ‘model minority’ myth in ways my largely African-American foster peers could not,” he says. “Whether in the classroom, on the street, or in the foster care system, I was noticed and groomed for success. Not everyone is so lucky. In recognizing this, I want to bridge my lived experiences with my commitment to public interest lawyering and ensure that all people, no matter their circumstance, have a shot at The American Dream.”