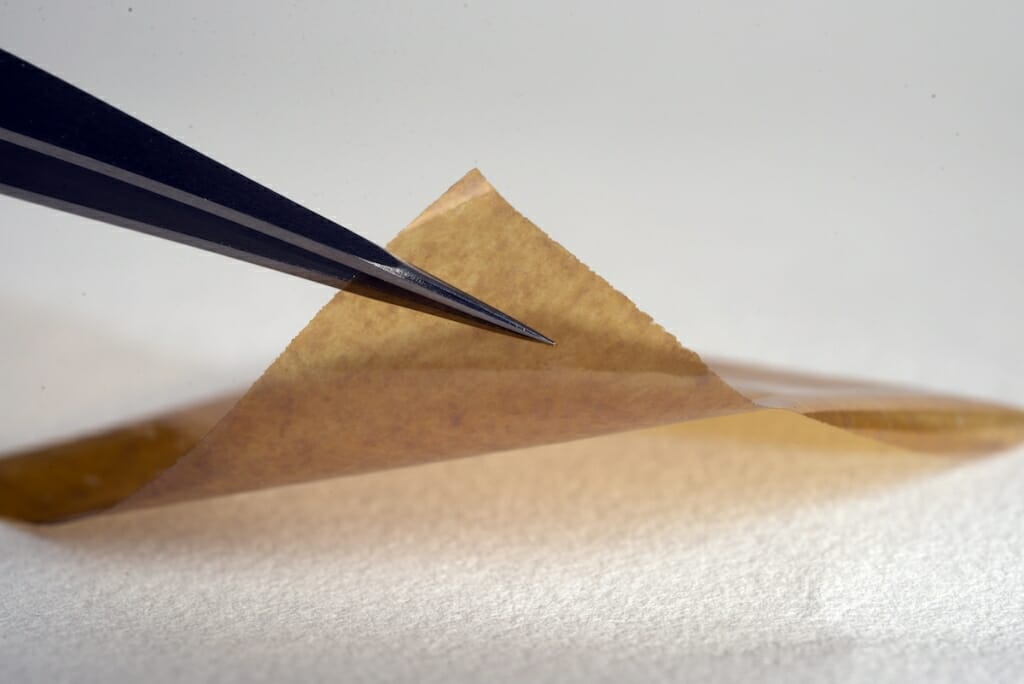 The silver-containing MicroLyte bandage is thinner than a human hair and able to be absorbed into the wound. The material is shown here on a fabric background. Photo: Imbed Biosciences

Millions of people with severe burns or diabetic skin ulcers could benefit from an experimental enhancement to a next-generation covering that is already healing difficult wounds. 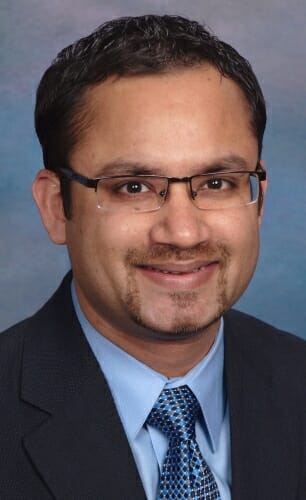 According to a scientific report published in August 2019, “In the United States, chronic ulcers affect more than 6 million people, with increasing numbers in the growing elderly and diabetic populations.”

In many cases, the chronic wounds remain open for months, due to difficult-to-treat infections that are often shielded by a biofilm.

Imbed’s silver-covering technology was invented in the lab of Nicholas Abbott, then a professor of chemical engineering at UW–Madison. Abbott guided Agarwal’s postdoctoral studies on the technology.

Imbed’s existing product, called MicroLyte, was cleared by the FDA for marketing in the U.S. in August 2016. MicroLyte is on the formulary of five major hospital systems, including UW Health, and is used in more than a dozen other hospitals across the country. “The formulary is a list of medications readily available for use at a hospital or health system,” Agarwal says.

MicroLyte contains a tiny dose of metallic silver particles on an absorbable polymeric multilayer film. Flexible and only 25 micrometers thick (thinner than a human hair), the covering places silver in direct contact with bacteria.

MicroLyte can eliminate the painful process of repeated removal that is needed when conventional bandages are replaced on tenacious wounds.

Silver’s antimicrobial activity rests on its ability to punch holes in the bacterial cell wall, but a biofilm can block that exposure. Chemically, gallium ions resemble a form of iron that cells use to gain chemical energy through the process of reduction.

“Bacteria inside the biofilm are looking for more iron, so they end up taking up gallium,” Agarwal says. But gallium ions cannot be reduced, and the bacteria atrophy for want of energy, helping to break up the biofilm. “So in return for accepting a worthless ‘Trojan horse,’ the bacteria are exposed to silver — the second punch — and they will die.

By placing nanometer-sized particles of both metals on the ultra-thin film, “we are using levels of both metals that are so low that they are not toxic to human cells, placed on a film that actually supports growth of skin cells,” Agarwal says.

Under the new grant, silver plus gallium will be tested on full-thickness wounds in pigs in the UW–Madison School of Veterinary Medicine. 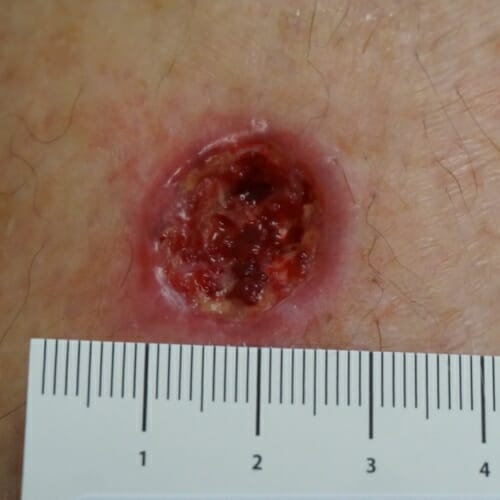 Before: A venous stasis ulcer on the leg on a 74-year-old man did not respond to standard care over 35 days. In the U.S., chronic ulcers affect more than 6 million people. 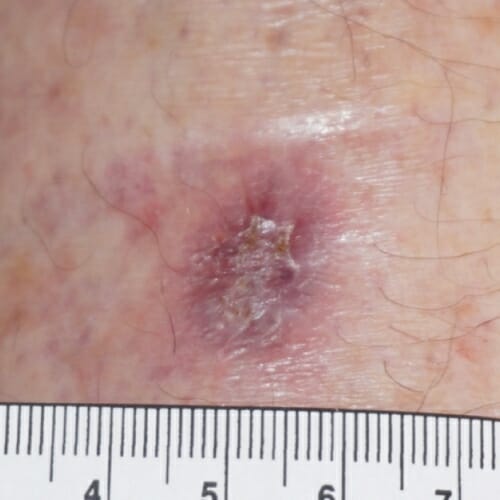 “To simulate chronic wounds, we will surgically create wounds and inoculate them with pre-established biofilms of antibiotic-resistant bacteria,” says Jonathan McAnulty, chief of surgery at the vet school. “Healing in porcine skin wounds is similar to healing in humans.”

McAnulty will head the animal studies in collaboration with Charles Czuprynski, chair of pathobiological sciences. Both researchers have worked for years with the silver-based dressings.

“We see animals with skin injuries that get colonized by bad actors,” says McAnulty, “including different strains of antibiotic-resistant staphylococcus. These wounds don’t want to heal, despite our best efforts, and can go weeks or months without progress. This clinical scenario is almost identical to human cases.”

Although the silver-bearing covering is highly effective in healing infections and closing many difficult wounds, the gallium is intended to enhance that activity by defeating bacterial biofilms. “Behind a biofilm, bacteria are more protected against any agent trying to get in and kill them,” says McAnulty. “If we can prevent the biofilm from forming, or if it is present and we can get it to dissolve, it will expose the bacteria to killing agents.”

Research at the veterinary school has already shown that the combination film can “completely disperse the bacteria biofilms created by a mix of two pathogenic bacteria,” Agarwal says. “Treatment with a commercial, silver-based dressing — not MicroLyte — had no effect.”

Chronic ulcers affect more than 6 million people in the U.S. In many cases, the wounds remain open for months due to difficult-to-treat infections that are often shielded by a biofilm.

Angela Gibson, a burn surgeon and medical director of UW Health wound healing services, has used MicroLyte on patients of all ages when conventional products have failed. “The property that I find unique in MicroLyte is the total conformation to the wound bed as the thin film melts into all the crevices of a wound likely where the bacteria are hiding and preventing healing. It is also very easy to apply and may decrease irritation, such as itching, caused by other products.”

Gibson says she looks forward to a clinical trial of the product to determine if her experience holds true in a larger study of patients.

Finding metal ions to defeat bacteria is simpler than the usual approach of finding or inventing molecules, Agarwal says. “We like to keep it simple. We already had silver working, but we thought, ‘Let’s take another metal, one that’s has been used in other FDA-approved formulations, and put it into the matrix in combination with silver, and see if it gets into the biofilm and sensitizes the bacteria to silver, which will kill it.”

An aging population, rising rates of diabetes, and a growing problem of antibiotic-resistant bacteria all portend a bigger problem with persistent wounds. If gallium’s Trojan horse strategy proves able to defeat biofilms, that will be a first, Agarwal says. “Today there is no commercially available formulation that is indicated for dispersal of biofilm in a wound. Zero.”