Scientists at the Morgridge Institute for Research have isolated a natural chemical that acts as a potent kryptonite against schistosomes, the parasitic worms that burrow through human skin and cause devastating health problems. 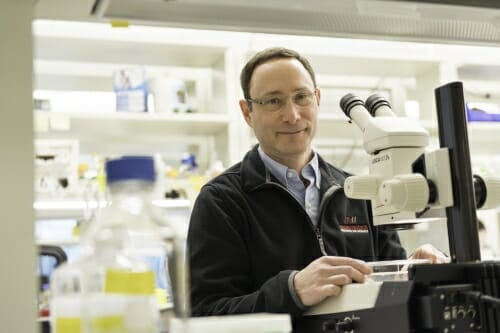 A research team led by Morgridge investigator Phillip Newmark reported in the Oct. 17, 2019 issue of PLOS Biology the successful characterization of this chemical, which could lead to new ways to fight the neglected tropical disease schistosomiasis. This disease, caused by schistosome infection, affects more than 240 million people in Africa, Asia and parts of South America.

In fact, schistosomiasis is second only to malaria in sheer numbers of people infected, and children are most often the victims. The disease is common in tropical areas where freshwater and human wastewater are not separated, allowing the schistosome to thrive.

The Newmark team focused on a phase of the schistosome life cycle that’s an intriguing target for preventing infection. Schistosomes seek out freshwater snails as hosts in order to produce millions of tiny fork-tailed creatures called cercariae, which are unleashed in the water and seek out mammals to infect. Their frenzied swimming allows them to penetrate human skin in minutes.

However, tiny aquatic creatures called rotifers also live on these snails and release a chemical compound that paralyzes cercariae on contact. Scientists have known about this factor for decades but have not further probed its biochemistry. 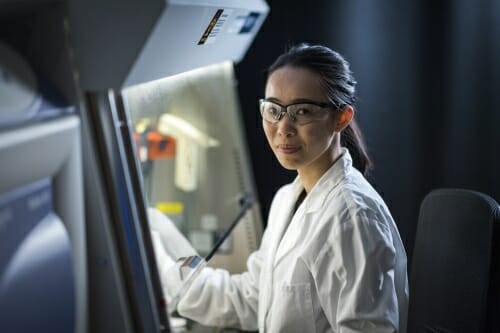 In the new paper, the Newmark lab and collaborators in Jonathan Sweedler’s laboratory at the University of Illinois at Urbana-Champaign report their successful effort to purify and chemically define this molecule, calling it “schistosome paralysis factor” (SPF). Lead author and University of Wisconsin–Madison graduate student Jiarong Gao placed SPF in various concentrations in water and demonstrated that the compound immobilized the cercariae, which promptly sank to the bottom of the water and remained in that state. Further, she showed that cercariae exposed to SPF were unable to infect mice.

Newmark, a professor of integrative biology at UW–Madison and an investigator of the Howard Hughes Medical Institute, says the results could open a promising new path to controlling schistosomiasis. Currently only a single drug, praziquantel, is used to treat infection and is given to millions of school children each year. But it only kills adult schistosomes and does not stop reinfection.

“Any time you’re talking about treating that many people with just one drug and no alternative, you’re really concerned about the ability of the parasites to develop resistance,” Newmark says.  “And that’s becoming more and more of an issue as the geographic range of the parasite may be spreading and hybrids between human- and livestock-infecting schistosome species are being reported.”

The Phil Newmark Lab has isolated a natural chemical capable of paralyzing the parasitic worm schistosome, opening the door to new ways to combat a neglected tropical disease that sickens more than 240 million people. Video: Morgridge Institute for Research

Once schistosomes burrow inside host skin, the parasites migrate into the blood vessels and anchor on a vein that supplies the liver. During this process, the parasites reorganize their tissues, and upon reaching the liver, develop reproductive organs, pair with a mate, and grow into mature adults.

At this point, the adults can live for decades inside the host. They produce hundreds to thousands of eggs daily, many of which are not expelled through waste and become lodged in organs such as the liver. Children with the disease are often ravaged by anemia, malnutrition and pervasive learning disabilities. The World Health Organization estimates roughly 280,000 people die annually from schistosomiasis.

Schistosomiasis is second only to malaria in sheer numbers of people infected, affecting more than 240 million people in Africa, Asia and parts of South America. Children are most often the victims.

Newmark says one interesting element of SPF is that its structure resembles serotonin, a neurotransmitter most widely known for regulating mood. But it also has an impact on normal neuromuscular function and SPF may be interfering with that pathway.

This research would not have been possible without a key discovery in 1981 by Peg Stirewalt and Fred Lewis of the Biomedical Research Institute in Rockville, Maryland. They found that the rotifers — which are known for the flowing filaments on their heads that look like spinning wheels — produced a factor that paralyzed cercariae.

But until now, their sole impact on schistosome research was to keep them away from snails because they interfered with the infection process. Newmark turned the equation around and put the rotifers in the spotlight.

The Newmark lab first ventured into studying schistosomes about 10 years ago. The lab’s primary focus has been on the planarian, an organism that can regenerate its entire body from tiny fragments. The researchers recognized the many similarities between planarians and schistosomes, and then applied more than two decades of advances in planarian cell and molecular biology to study its parasitic relatives.

“All the work that we’ve done has been driven by our curiosity about these amazing planarians and all the different things that they can do,” Newmark says. “But we now have a new end game: We could actually wind up helping people in a tangible way, on a scale that we could not have considered before.”