A super-slippery coating being developed at a University of Wisconsin–Madison lab could benefit medical catheters, factory equipment, and even someday, oil tankers.

The coating contains a lubricating oil that resists the attachment of bacteria. A first commercial target is catheters, which are used to deliver or remove fluids in medicine.

Catheters are frequently colonized by bacteria that form a tough “biofilm” that resists agents that would otherwise kill them.

Between 250,000 and 500,000 catheter infections in the United States each year cost billions through increased use of antibiotics, longer hospital stays, and the need to replace the catheter.

The Wisconsin Alumni Research Foundation holds several patents on Lynn’s work and has enrolled the project in the WARF Accelerator Program. According to WARF Accelerator director Greg Keenan, “The super-slippery surface could reduce infections, blockages and costs associated with catheters.”

David Lynn, a professor of chemical and biological engineering at the University of Wisconsin–Madison, is developing “slippery” coatings to reduce bacterial growth on implanted medical devices, such as catheters. The water-repellent coating speeds fluid movement and also deters colonization by bacteria.

WARF Accelerator aims to cut risks of promising technologies and ease the path to licensing by a business. “The goal of WARF Accelerator is to attract industry partners or investors by validating market potential, demonstrating commercial value, and de-risking the underlying technology,” says Keenan.

Revenues from licenses are the primary source of the millions of dollars that WARF sends to UW–Madison annually to support research, salaries, buildings and equipment. 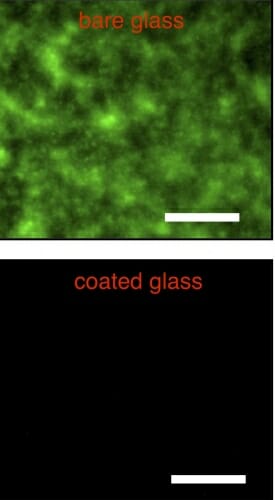 After 24 hours, a bacterial pathogen, Pseudomonas aeruginosa (green), has attached to a bare glass slide, but not to a SLIPS-coated slide that contains an antibacterial agent. David Lynn, Materials Views, 2016

The new coating can also be infused with slow-release antibiotics, which could kill fungi and bacteria in the bloodstream or urinary tract where catheters are often used.

With Helen Blackwell, a professor of chemistry at UW–Madison with extensive understanding of bacterial growth, Lynn has demonstrated that the “slippery liquid-infused porous surfaces” (SLIPS) indeed prevent bacteria from growing on glass surfaces.

Lynn’s slippery coatings were inspired by certain plant leaves, which cause water to bead up into nearly spherical drops. “There’s been a lot of effort in materials science to develop synthetic mimics of those leaves,” Lynn says.

Lynn’s SLIPS are porous materials that are made by dipping an object in two polymer solutions. The coatings are about three millionths of a meter thick, about 25 times thinner than a sheet of paper.

Many processes, such as those used in computer chips and solar panels, can coat flat objects. But Lynn’s dip-and-redip process can coat complex or curved surfaces like both surfaces of a catheter.

About a year ago, funding and support from WARF Accelerator began to support “de-risking” the coating process. Catheters, Lynn notes, “must withstand bending, sterilization, coiling, and sitting on a shelf for six months without getting dry or brittle.”

Lynn’s coatings feel ultra-smooth, but their rough interior can store chemicals. “These cargoes could kill bacteria or fungi,” Lynn says. “That could help further prevent fouling by bacteria and prolong the lifetimes of these materials.”

And because the coatings prevent the adhesion of many substances, including water, oil, ketchup and mustard, they may be useful in food processing. 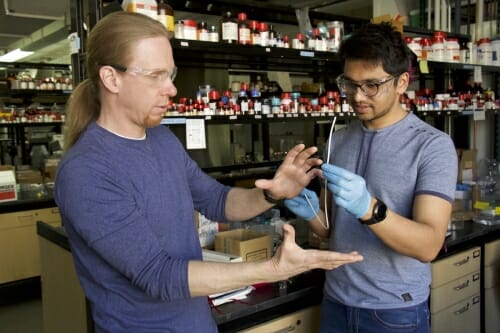 David Lynn, left, a professor of chemical and biological engineering at the University of Wisconsin–Madison, and graduate student Harshit Agarwal discuss the super-slippery coatings they are developing to reduce bacterial growth on implanted medical devices, such as catheters. Photo: David Tenenbaum

Keenan, director of WARF Accelerator, says, “My experience at LiquiGlide, which is commercializing a different slippery coating, taught me that viscous liquids sticking on solid surfaces results in billions of dollars of waste and inefficiencies. I saw firsthand the tremendous economic, environmental, and health care benefits that can be addressed with these new liquid-infused coatings in a wide variety of applications, from consumer packaging to chemical manufacturing to medical devices.”

Catheters carry fluid, which could pull out the lubricating oil or antibiotic additive over time, Lynn says. “We needed to look at what would happen in an artery or vein in contact with blood. Can these coatings also prevent clotting? Can they survive in the high-salt environment of a urinary catheter? How effective is the anti-bacterial activity?”

So far, one year’s examination has not unearthed serious obstacles, Lynn says. “These are the kind of tests that WARF Accelerator can support and are beyond the usual research and design work we do but are helpful for firms that may want to license this technology. The technology becomes less risky to them, and more profitable to WARF. The ultimate winner will be the university.”