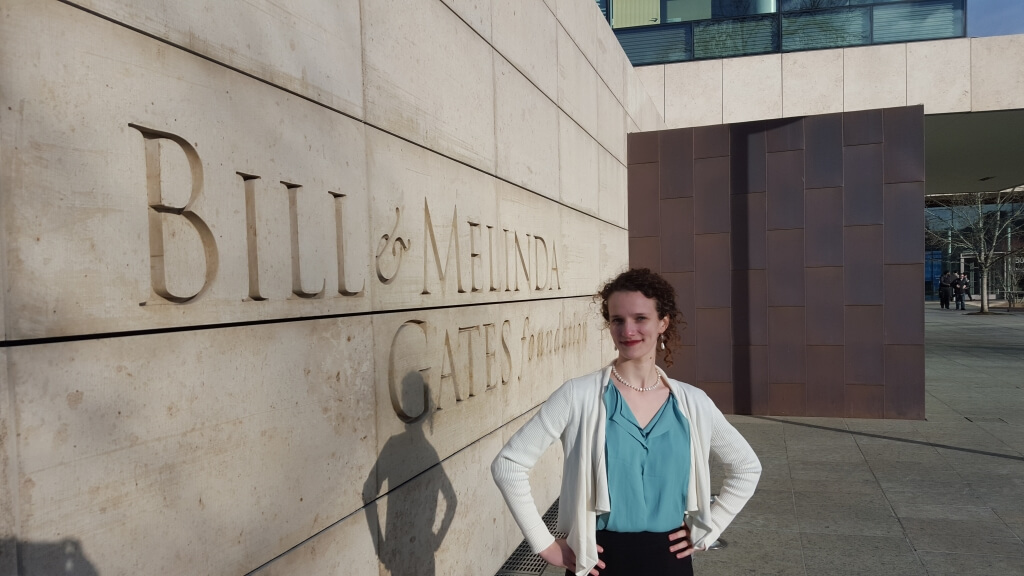 Joanna Lawrence outside the Bill and Melinda Gates Foundation headquarters in Seattle.

Lawrence received her bachelor’s degree in anthropology from UW–Madison and completed her master’s degree in archaeology at Cambridge last year using funds from her Beinecke Scholarship, awarded in 2013. She will pursue a doctorate in archaeology under the supervision of Professor Marie Louise Stig Sørensen.

“Joanna’s diverse field, research and leadership experiences distinguish her from other talented students in this field,” says Julie Stubbs, director of the Office of Undergraduate Academic Awards, who assisted Lawrence in her applications for both the Gates and Beinecke scholarships. “Her enthusiasm for archaeology is contagious; she reminds us that studying the remnants of the past promotes tolerance and acceptance by helping us to understand the great cultural diversity throughout history.”

“After I withdrew from my former career as a ballet dancer, my passion to create physical expressions of myself found satisfaction in uncovering the memories of selves expressed in the physical objects they left behind,” she wrote in her scholar biography. “I seek to understand how these sites’ unusual volume of craft production and unprecedented fortifications relate to social change preceding the Iron Age.”

Working with anthropology professor John Hawks to analyze human evolution through genetics piqued Lawrence’s interest in archaeological science. For her senior honors thesis, supervised by Sarah Clayton, assistant professor of anthropology, and James Burton, senior scientist in the Department of Anthropology, she collected soil samples from a Bronze Age settlement in Aberdeenshire, Scotland and analyzed their trace element patterns to identify activity areas.

“That research allowed me to merge my interests in scientific approaches and anthropological questions into one project,” Lawrence wrote.

Her master’s research followed this vein, as she used statistical analysis to examine sexuality portrayed in Bronze Age Swedish rock carvings. Lawrence has also participated in excavations in Bulgaria and Hungary.

One previous UW–Madison graduate has won a Gates Cambridge scholarship: Rishi Wadhera, who graduated in 2006 and was a student at the Mayo Medical School when he was selected in 2008. He received a Master’s (MPhil) in Public Health, using his studies to tackle health disparities in underprivileged communities.

Two other UW–Madison students were named finalists: Ross Pedersen in 2013 and Sean McMaster in 2010.

The prestigious postgraduate scholarship program was established through a $210 million donation to the University of Cambridge from the Bill and Melinda Gates Foundation, which remains the largest single donation to a U.K. university.

The successful 35 U.S. candidates this year, 13 of whom will pursue doctoral degrees, were selected from an initial field of 826 applicants. Some 186 were nominated by their departments and 86 were shortlisted in Cambridge for interviews by academics from the U.K. and U.S. at the Gates Foundation headquarters in Seattle at the end of January.

The program places emphasis on both outstanding academic ability and social leadership in its admissions process.

The U.S. scholars will join about 55 from other parts of the world who will be announced in early April after interviews in late March. At any one time the Gates Cambridge Trust aims to support 225 scholars at the University of Cambridge.