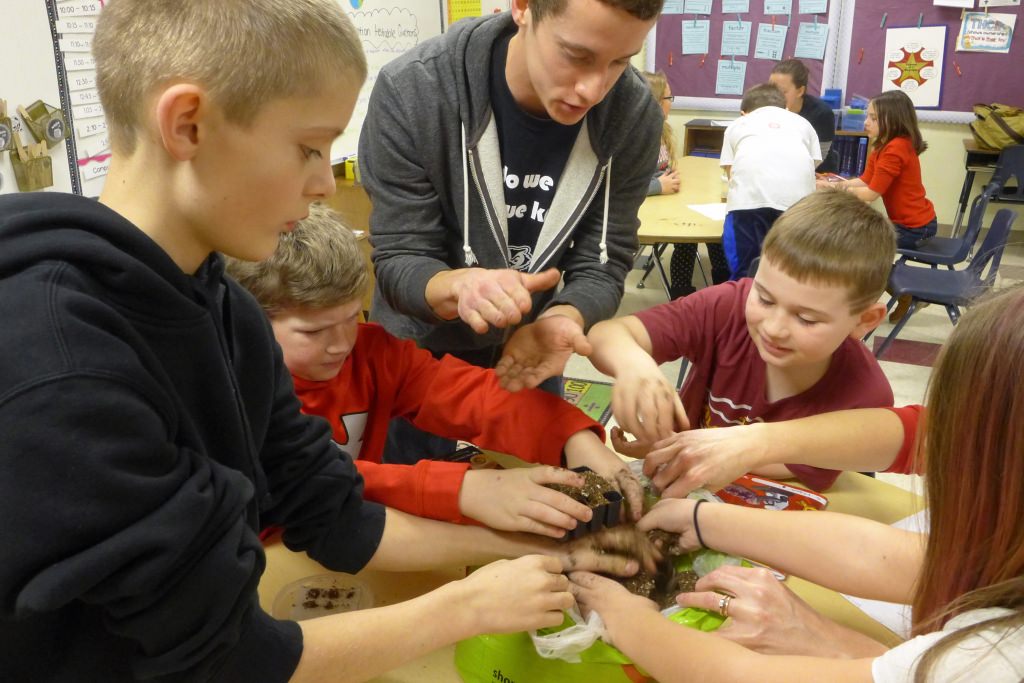 These minimal props, combined with a basic light box — two milk crates lined with aluminum foil — are the raw materials for plant-growth experiments that Bree Wilhelmson’s students will pursue for almost two months.

The experiments were not hatched in a textbook or a science-standards cheat sheet. Instead, they were invented by groups of these 4th graders in their previous session with the UW–Madison alumni. Will the plants grow faster in the light box or outside it? What difference will fertilizer make? How will seed spacing affect plant height?

The process of “What do you want to know? So how can you answer your question?” is a key element of inquiry-based learning, and it’s the fundamental precept of Biocore, the undergraduate program that sent these alums to Mazomanie. Each year, Biocore also sends as many as 50 other science outreach ambassadors to Wisconsin schools. 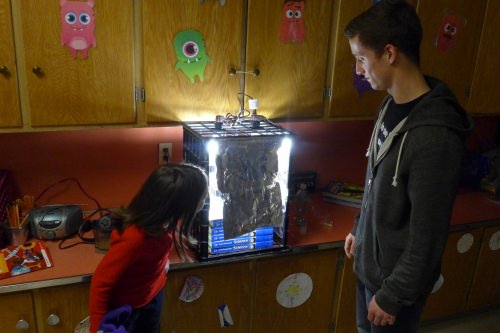 Patrick O’Grady and a student with the light box, which will remain lit for
about 40 days, until the Fast Plants produce their own seeds. David Tenenbaum

One of the beauties of inquiry-based learning is that even an experiment gone awry can be the basis for learning, says Wilhelmson. “We have had experiments that did not ‘work’ because students changed too many variables, but even that becomes a teachable moment: ‘If you were going to do it again, how would you avoid repeating the mistake?’ The process is most important — being able to ask a question and then collect the data.”

The enthusiastic greeting at the door was not the only indication that the kids were on board with the session, as shown by some of their comments:

The classroom-friendly Fast Plants, which mature in a speedy 40 days, were created more than 30 years ago by UW–Madison plant pathologist Paul Williams. The Fast Plants program has also perfected a cost-cutting strategy: raising the seeds itself, finding cheap containers and soil mixes, all aimed at producing the kind of excitement evident in Wilhelmson’s class. 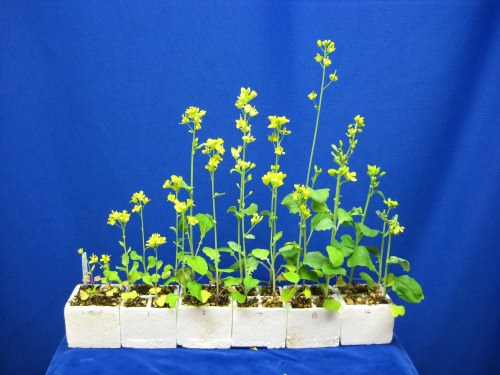 Fast-growing brassica plants can be used for many classroom experiments. This experiment showed the effect of fertilizer (numbers show how many pellets each plant received). Wisconsin Fast Plants

After the students fill 16 wells with soil and a seed or two, they place the container on an inverted deli cup, which provides a constant supply of water, then place the cups in the light box.

And then it’s discussion time. Why, asks Harris, did one group of students hypothesize that the plants would grow better outside the light box, where the LEDs won’t stop shining? Because, explains one group member, the plants need to rest, much like people. “So you’re saying that plants are like people in this way?” says Harris.

It’s fitting that Fast Plants and UW–Madison students are serving Wisconsin students, as the plants are rooted in cabbage, long a key state vegetable crop and the source of sauerkraut. Williams was hired in 1961 to study the growth and health of cabbage and related crops in the Brassica family, such as cauliflower and broccoli, and he collected Brassicas around the world. Working one snowy day in a greenhouse funded by the National Sauerkraut Packers housing hundreds of strains of Brassica, Williams noticed a plant flowering extraordinarily early.

“When you grow a large population of plants, you always see different things,” says Dan Lauffer, who is succeeding Williams as director of the Fast Plants program. “These structures randomly show up, caused by genetic mutations.”

Using standard plant breeding, Williams bred promising plants with each other to concentrate the rapid-cycling genes in subsequent seeds.

Williams knew the fast Brassicas would speed plant breeding, and thought they would interest educators, so he began a 30-year effort to place the plants in classrooms around the country.

At present, about 20,000 classrooms, including several at Mazomanie Elementary School, are using Fast Plants.

“Inquiry is about process, about thinking like a scientist,” says Evert, who began using the inquiry approach in 2008. “These experiments force you to ask questions: ‘I want to know something about the world. How do I go about engaging with that myself?’

“The power of inquiry is that whatever the age of the scientist, they can find something out if they think it through. I feel like I am helping kids answer their own questions about the world in a way that makes what they find meaningful.”

Biocore and the Wisconsin Heights School District have been partners for 13 years, says Harris. “The district hosts our weeklong summer science camp and our twice-monthly After School Science Club, in addition to the classroom visits by the Biocore outreach ambassadors.”

The experience also fulfills a vocational need for Nathan Teachout, from Ripon, one of the three ambassadors. “It’s important to learn to talk to people, to translate science talk.” That skill will be critical, he adds, for his intended occupation: pediatrician.

Is many ways, the session at Mazomanie reiterates the four semesters that undergraduates spend in Biocore, a learning community of about 200 members. According to Patrick O’Grady, from Waukesha, another of the ambassadors, “We learned so many valuable skills in Biocore, and these kids are learning the same things. I never did experiments like this in school. It’s good to develop this technique of learning through inquiry early. Whatever these kids end up doing with their lives, whether it’s science, education or anything else, they now have experience showing that inquiry is really important.”