When Jim Steele thinks back over the last seven years, from the early research on biofuels, followed by a dream of moving Lactic Solutions LLC technology to the marketplace, and now the acquisition of the company by Lallemand Biofuels & Distilled Spirits (a unit of Lallemand Inc.) last month, he is thankful for the network of UW–Madison entrepreneurial experts.

“UW-Madison is unique, according to my colleagues at other universities,” says Steele, co-founder and CEO of Lactic Solutions and UW–Madison Winder-Bascom Professor of food science. “UW–Madison may be ahead of its peers in providing support to entrepreneurial faculty and staff. However, most faculty and staff, including us in the early years, are not aware of the resources available to them.”

Steele’s advice for anyone else at UW–Madison with an idea for a product or interested in commercializing a discovery, is to get plugged into the university’s entrepreneurship pipeline early and take advantage of the tools available for turning those ideas into commercially viable solutions. 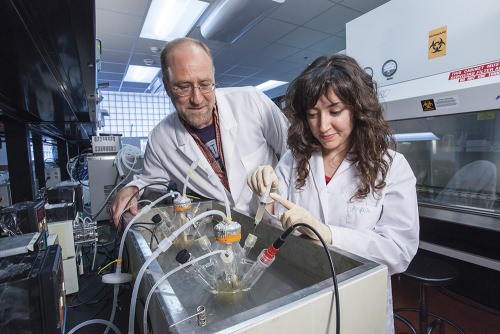 Jim Steele, pictured in his lab with research assistant Busra Aktas in 2013, says anyone at UW–Madison who has an idea for a product or is interested in commercializing a discovery should get plugged into the university’s entrepreneurship pipeline early. Photo: Wolfgang Hoffmann

Steele and Jeff Broadbent are the scientific leads at Lactic Solutions. Broadbent is the associate vice president for research and associate dean of graduate studies, and professor in the Department of Nutrition, Dietetics and Food Sciences, at Utah State University. Together, their research is based on understanding the basic physiology, genetics and ecology of lactic acid bacteria.

Lactic acid bacteria are common contaminants in ethanol fermentations, where they compete with the yeast for nutrients and reduce biofuel yields. Industry typically uses antibiotics to control these contaminants. Lactic Solutions products are engineered lactic acid bacteria that produce ethanol and inhibitors active on the contaminating bacteria. These new products are of value to fuel ethanol producers interested in higher ethanol production yields and reduced consumption of antibiotics.

Steele’s research was originally funded by the Great Lakes Bioenergy Research Center. The GLBRC is led by UW–Madison, with Michigan State University as a major partner, and is one of three bioenergy research centers established by the U.S. Department of Energy in 2007.

“We received funding from GLBRC and that was the beginning of the process. Because of GLBRC’s early support, we then received a five-year grant from the U.S. Department of Agriculture,” Steele says. “That gave us stable funding and we were able to develop the data to support our first patent application.”

Steele says it was serendipity that led him to call Beth Werner, senior intellectual property manager at the Wisconsin Alumni Research Foundation (WARF) on a Friday to discuss his patent idea. He said he was considering sending an abstract for publication on Monday but was having second thoughts. 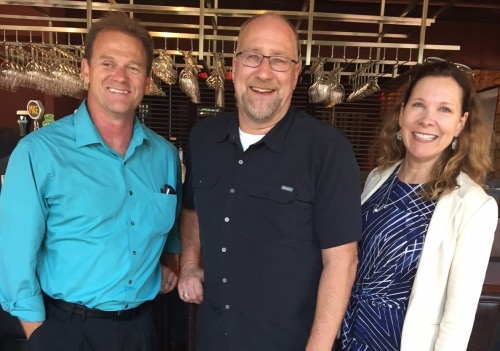 Lactic Solutions scientific leads Jim Steele (center) and Jeff Broadbent brought Peggy Steele onboard to utilize her business skills based on 10 years of working in the field of industrial cultures used in consumer products. Photo courtesy of Peggy Steele

“I asked if we should bother to protect the concept and Beth said we should,” Steele recalls. “We worked on writing the patent over the weekend and that became the foundation of Lactic Solutions.”

The first of Steele and Broadbent’s two patent applications was pending when they were at a USDA meeting four years ago reporting on their research results.

“After the meeting Jeff and I were sitting at the bar talking to people about the ethanol industry when the problem that they faced with contaminating lactic acid bacteria came up,” Steele says. “It was clear to both of us immediately that was a great application for our technology.”

With that epiphany, Steele and Broadbent brought Steele’s wife, Peggy, on board. She brought business skills to the mix based on 10 years of business development experience working in the field of industrial cultures used in consumer products.

“We met with ethanol producers and discovered that there really was a need in the market for what Lactic Solutions could offer,” Peggy Steele says. “It all came together — we had the right people involved, too.”

“Mark told me about the potential pitfalls, was a real caring person and an advocate for entrepreneurship on campus,” Steele recalls.

Cook, who died in September from complications related to cancer, helped establish D2P and was a prolific researcher and entrepreneur with more than 40 patents and three startup companies in the areas of health and agriculture.

Lactic Solutions joined D2P’s June 2015 Igniter program and spent the summer working with D2P staff and plowing through financials, a marketing plan and business opportunities. With D2P, the Steeles began to understand the industry better, connected with people who work in the ethanol industry and developed their marketing message.

“D2P helped us sharpen our strategy and put it into action,” Jim Steele says. “We were talking to potential customers the second day of the program. Those were critical conversations and really the whole summer with D2P was a major point of development for Lactic Solutions.”

“D2P filled gaps that we had, and was a great experience,” Peggy Steele says.

“I asked if we should bother to protect the concept and Beth said we should. We worked on writing the patent over the weekend and that became the foundation of Lactic Solutions.”

“On paper it all looked so easy,” Steele says. “Turns out it wasn’t so easy. That’s the way science goes.”

“They taught me what the industry needs were and what simply would not work in industry. Also, the people at WARF were amazing all the way through the process. Mark Staudt and Rich Schifreen were true advocates from the beginning and their ability to connect us with the right programs was essential,” he says.

All those experiences led to a collaboration with gBETA, a community-based offshoot of gener8tor, a nationally renowned startup accelerator.

Lactic Solutions is rare in that it did not need venture capital investors and was able to skip that step in the process of moving to the marketplace.

“In 2016, David Tenenbaum in UW Communications wrote a story about Lactic Solutions and that story got behind the firewall of the Renewable Fuels Association,” Steele says, referring to the leading trade association for America’s ethanol industry. “Suddenly all of these customers that we had been trying to contact started contacting us. And here we are — it doesn’t even seem that long ago that Jeff and I had our eureka moment while sitting and talking at a bar.”

“Go to D2P, go to WARF and go to gBETA. They are experts in their areas. There is a lot of help at the university that we became aware of as we were going through this process.”

The combination of WARF and UW–Madison resources has paid off for Lactic Solutions, as the startup company recently completed the cycle of innovation and ended up with several offers.

“We took the Lallemand offer because they had the best complimentary skills, motivation and interest to get the product to market,” Peggy Steele says.

If you feel that you have developed knowledge or technology that can add value, the Steeles recommend reaching out for help in commercialization, including patenting.

“Go to D2P, go to WARF and go to gBETA,” Peggy says. “They are experts in their areas. There is a lot of help at the university that we became aware of as we were going through this process. D2P was instrumental in helping us get all those dots connected.”

Jim Steele adds, “Most people cannot be an expert in every aspect of launching a business. The beauty of the UW system is that it provides access to the disciplines needed to make the whole thing work. Talking to people outside our areas of expertise played a key role in our success.”