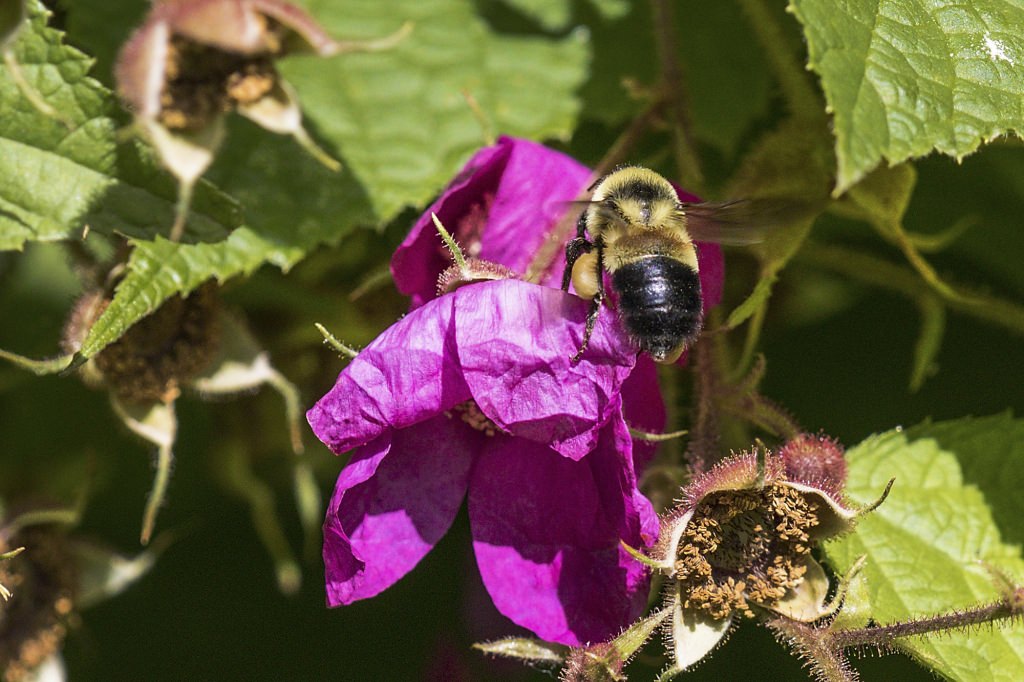 The rusty patched bumble bee flies between flowers at the UW–Madison Arboretum. The species (Bombus affinis) was officially listed as endangered by the federal government March 21, 2017. Photo: Hyunsoo Léo Kim

With a trained eye and quick finger stabbing the air, University of Wisconsin–Madison Arboretum native plant gardener Susan Carpenter counts off the bumble bees buzzing in front of her.

“The two-spotted, the brown-belted, the common eastern — which has just that one yellow stripe,” Carpenter calls out to the scientists, government officials and prairie restorers gathered around the flowering St. John’s wort.

Following the listing of the rusty patched bumble bee as an endangered species in March, more than two dozen people — including representatives from the Wisconsin Department of Natural Resources and the U.S. Fish and Wildlife Service — had come to the Arboretum to learn how to use photography to identify pollinators. The workshop was designed to help land managers document the range of the threatened bee and to track other native pollinators.

The Arboretum, one of the rusty patched bumble bee’s remaining habitats in southern Wisconsin, has become a source of expertise in surveying the bee and identifying habitat to protect and restore.

In Pursuit of Pollinators

The first bumble bee to be listed under the Endangered Species Act, the rusty patched bumble bee has highlighted the plight of native pollinators as they contend with habitat loss, climate change and other stresses. According to the international biodiversity organization IPBES, 40 percent of the world’s pollinating insects and other invertebrates have threatened populations.

After a morning presentation by Carpenter on bee identification and pollinator habitat, the workshop attendees split into small groups and walked into the Arboretum’s gardens and prairies to try their hand at photographing the bees as they darted from flower to flower. 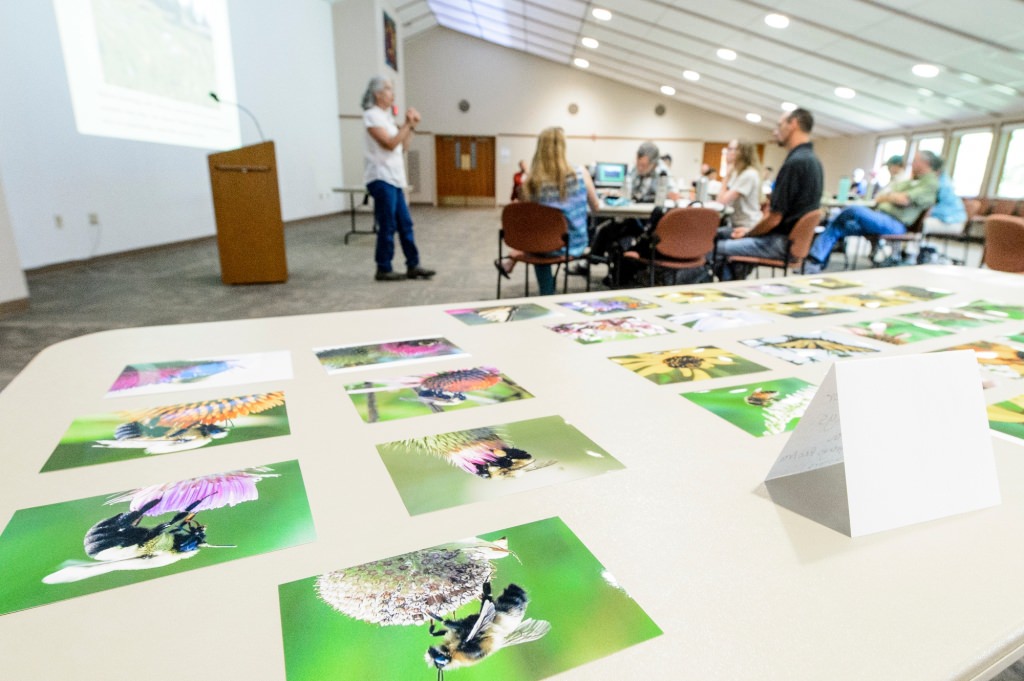 Susan Carpenter describes the life cycle of a bumble bee during a workshop on photographing bees at the Arboretum. Photo: Bryce Richter

Madison La Follette High School teacher Brad Harrison attended the workshop as part of the Research Experiences for Teachers program, which is supported by the National Science Foundation. Harrison is working throughout the summer with UW–Madison Professor of Entomology Claudio Gratton and his graduate student Jeremy Hemberger to study pollinators in Wisconsin cranberry marshes. He is developing course materials for his students based on the cranberry work and photo surveys of bees.

“I’ve already started doing some stuff (in class) around the rusty patched bumble bee,” says Harrison. “I might be using photography as a way of collecting data around pollinators and this question of what resources they’re using.”

The rusty patched bumble bee is just one of the 400 to 500 native bee species found throughout Wisconsin. Of those, some 85 percent are solitary, foraging and mating on their own, and relatively little is known about them. About 20 species of social bumble bees, which cooperate in colonies, call Wisconsin home. The European honey bee is an introduced and domesticated species used for commercial pollination operations and honey cultivation.

Roughly 75 percent of the world’s crops rely at least in part on animal pollination, according to the IPBES. 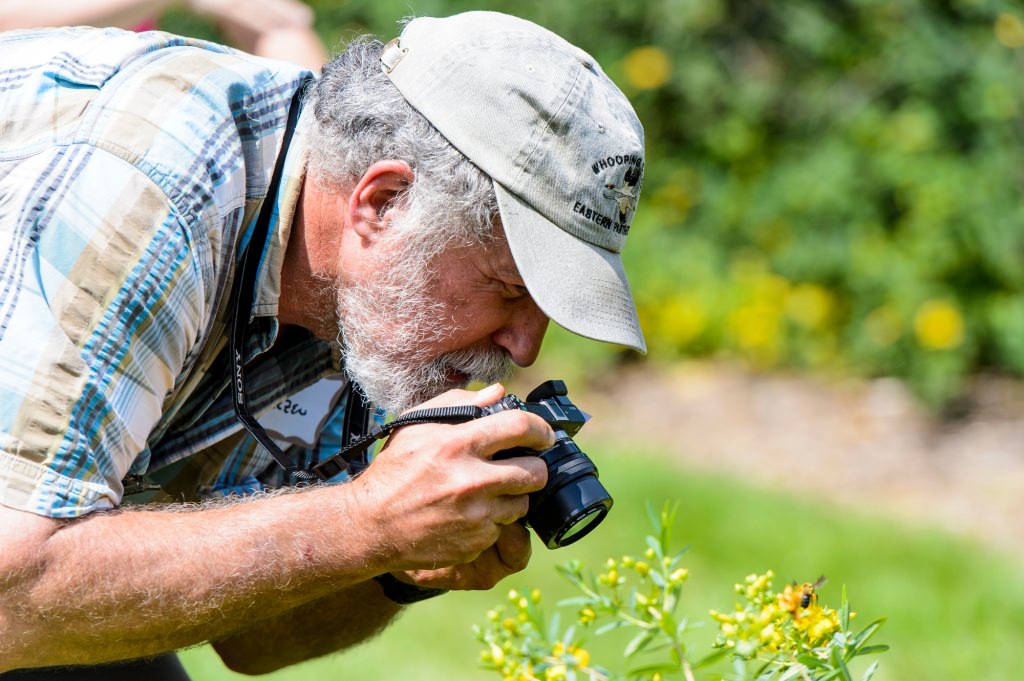 Sarah Warner is a Madison-based environmental contaminants specialist with the Fish and Wildlife Service who attended the class to meet other land managers as well as to hone her identification of insects after originally focusing on birds. She recently connected with Carpenter and Gratton to study the range and habitat of the rusty patched bumble bee to, in part, learn how to support its remaining population.

“We really want to know more about: What type of habitat do they need? What is high quality habitat?” says Warner. “This is important, what we’re doing here today, because we need to do surveys. We need to start looking for them.”

“A lot of our endangered species are outside city centers, for example, and so what I think is cool about the rusty patched bumble bee is it’s really bringing conservation to the core of some of these cities. And I also think having it so close to the city can really spark community action and community interest because people can go out and see an endangered species in their backyard. And you can’t say that for other endangered species,” says Warner.

Carpenter says that the listing of the rusty patched bumble bee as an endangered species has sparked more enthusiasm among the community about what habitat can support threatened populations and keep other pollinators stable. Despite a lot of research in the area, much remains unknown.

“We are interested in which garden plants are supporting pollinators,” says Carpenter, just as she spots the day’s first rusty patched bumble bee. “Assuming that there’s a variety of things they could be visiting, which ones are they actually visiting?”

The advantage of photography, Carpenter says, is that it is not invasive and anyone can participate. It also helps distinguish similar species with the benefit of the insects frozen in time.

“A turkey is a turkey is a turkey,” Carpenter says, gesturing to the wild turkeys wandering the Longenecker Horticultural Gardens. “With these bumble bees, you have all these different patterns. And that’s where the photographs are important.”