Growing up, Liz Anna Kozik didn’t think of the restored prairies around her home in Naperville, Illinois, as a special habitat worth noticing — until she moved to Providence, Rhode Island, where she felt their absence within the New England landscape.

She had moved to Providence to study art at the Rhode Island School of Design. Now, having returned to the Midwest as a graduate student in design studies in the School of Human Ecology at the University of Wisconsin–Madison, Kozik has turned her artistic skills to the prairies she once overlooked. As part of her master of fine arts thesis, Kozik has installed an exhibit telling the story of the first restored prairie in the world, Curtis Prairie at the UW–Madison Arboretum. 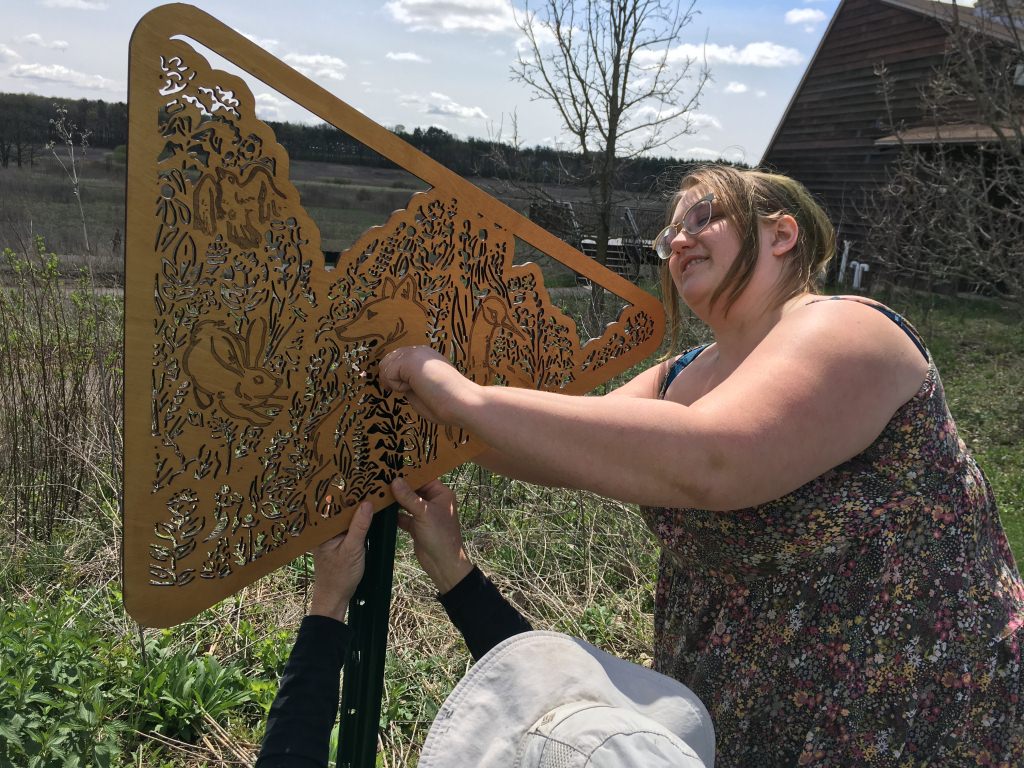 Through full-length comics, hand-woven tapestries, and wooden signs over the prairie, “Stories in the Land” explores the history of prairie restoration and the land that became the Arboretum in 1934.

The exhibit is officially open through June 8, but the signs and artwork will likely stay up throughout the summer. The wooden signs use the prairie itself as a backdrop, one that will change continuously during the season. Kozik joined her program, where she works with Marianne Fairbanks, an assistant professor in the School of Human Ecology, in 2014.

On a sunny spring day in mid-April, Kozik worked with Susan Carpenter, native plant gardener at the Arboretum, to install the signs along the entrance to Curtis Prairie. Each features an original design by Kozik laser-cut into birch plywood. 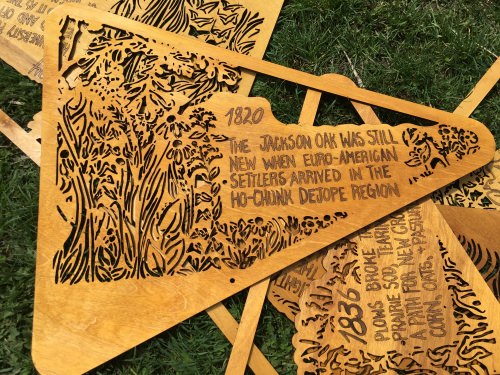 Design studies graduate student Liz Kozik designed and cut these wood signs to tell the story of land use and prairie restoration at the UW–Madison Arboretum in her exhibit “Stories in the Land.”

“When we talk about the environment, most stories are about how people have destroyed things, how we can’t do anything good,” Kozik says while installing one of the signs. “The story of prairie restoration is people trying really hard to do good and I’m into that.”

“I’m with you on that one,” adds Carpenter.

The signs resemble roadside markers warning not to pass, inviting visitors to slow down and inspect them. The roadside design is an extension of a previous exhibit Kozik installed at the Arboretum last year, and the signs tell a brief history of Curtis Prairie. The negative space is filled by prairie, which on the day of installation was just starting to green up promisingly in anticipation of warmer days ahead.

Kozik drew the comics throughout the semester as part of her graduate focus on comic art, working with UW–Madison Chazen Family Distinguished Chair in Art and cartoonist Lynda Barry. They are based on research she conducted in the fall on Arboretum history with Bill Cronon, the Frederick Jackson Turner and Vilas Research Professor of History, Geography, and Environmental Studies at UW–Madison. 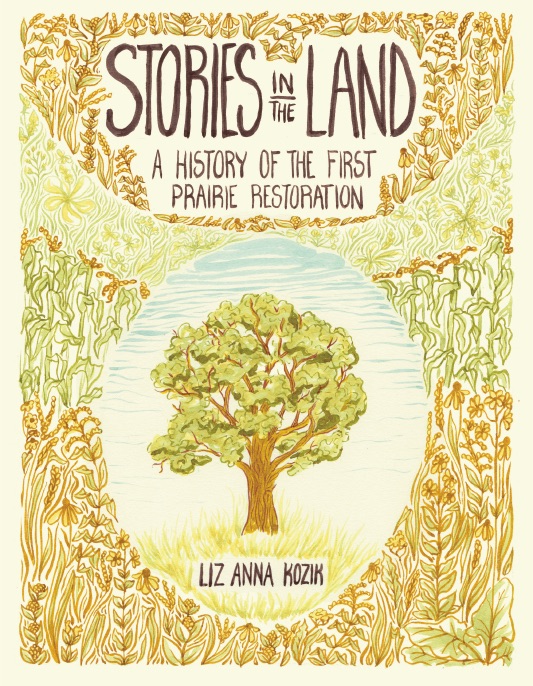 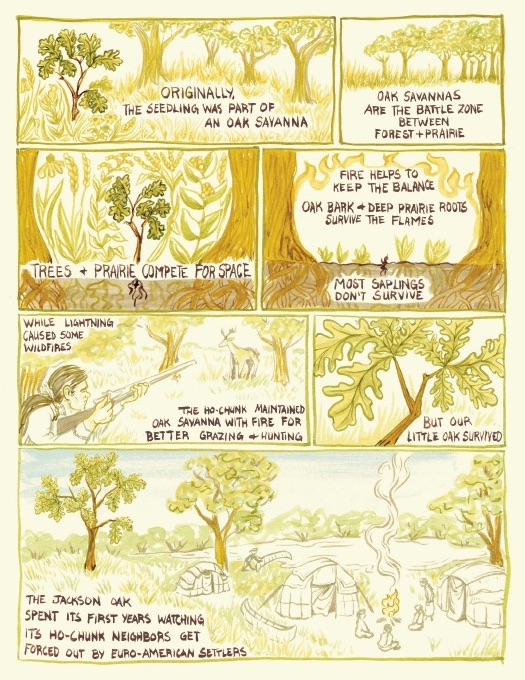 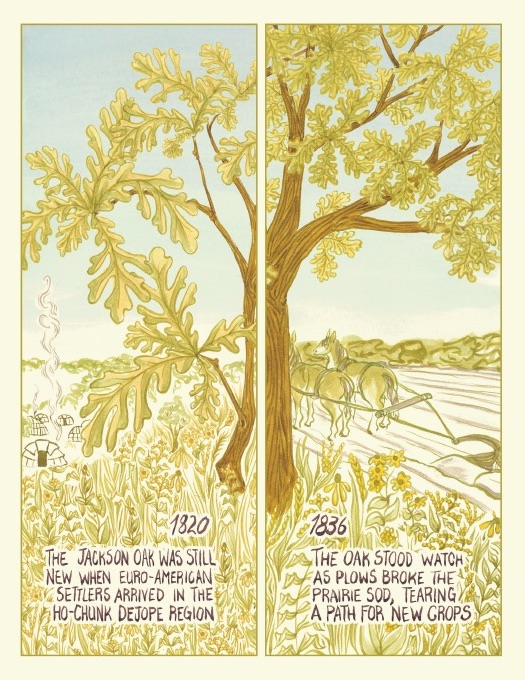 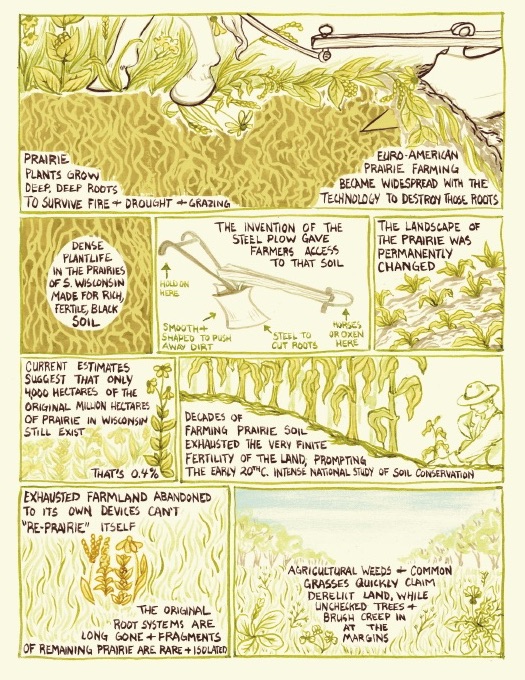 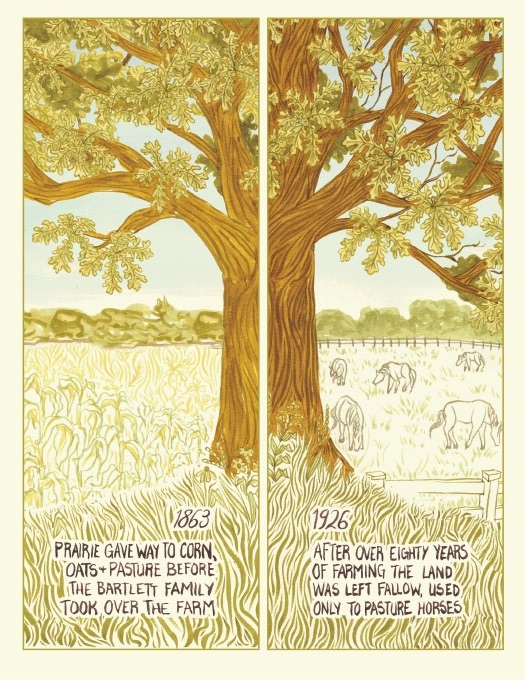 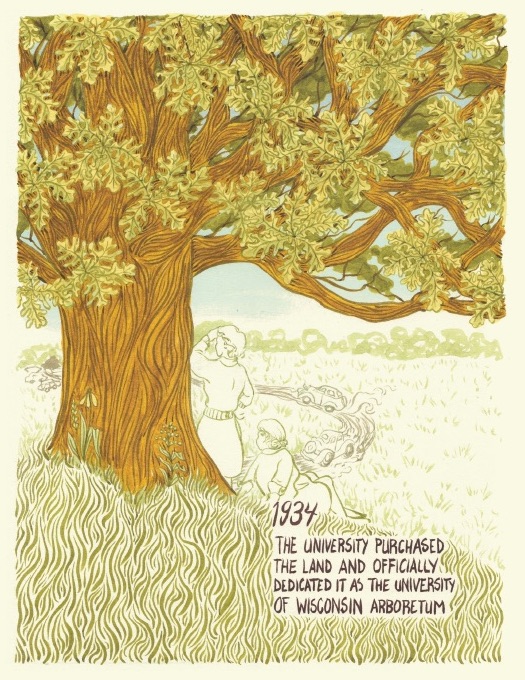 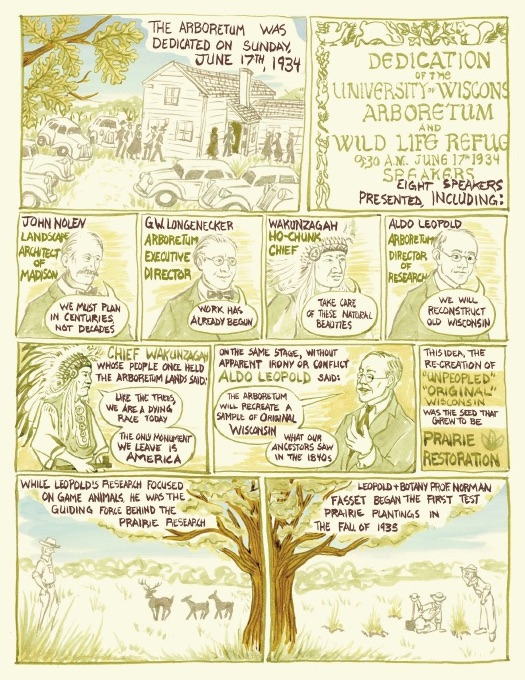 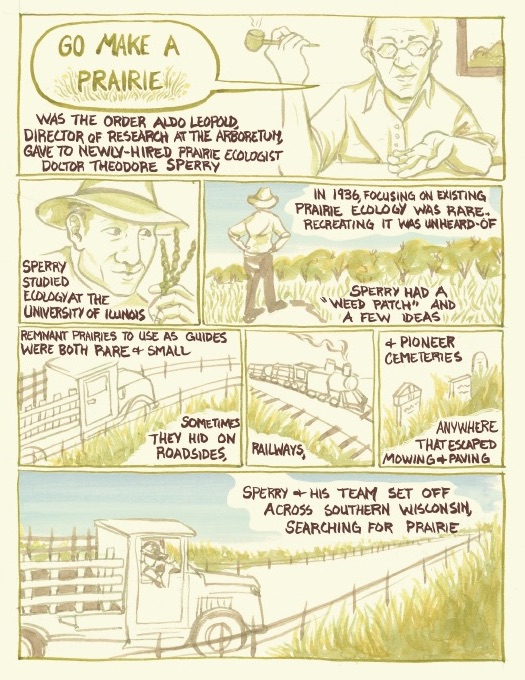 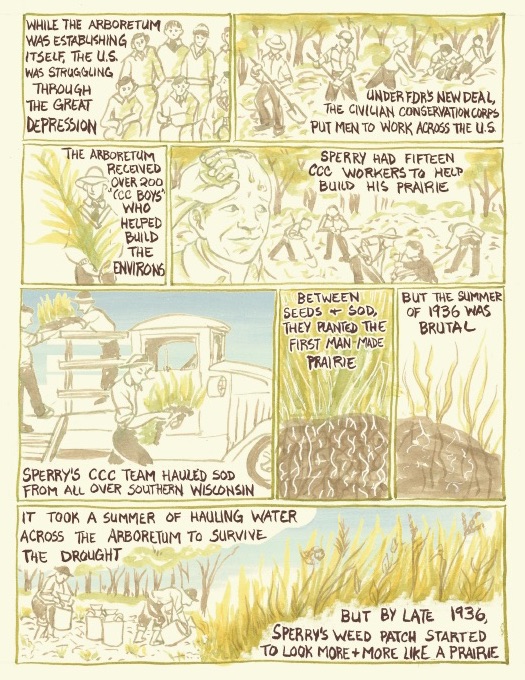 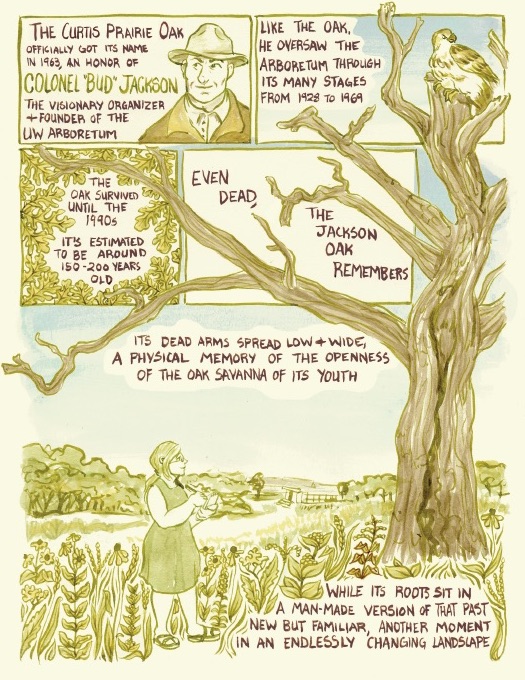 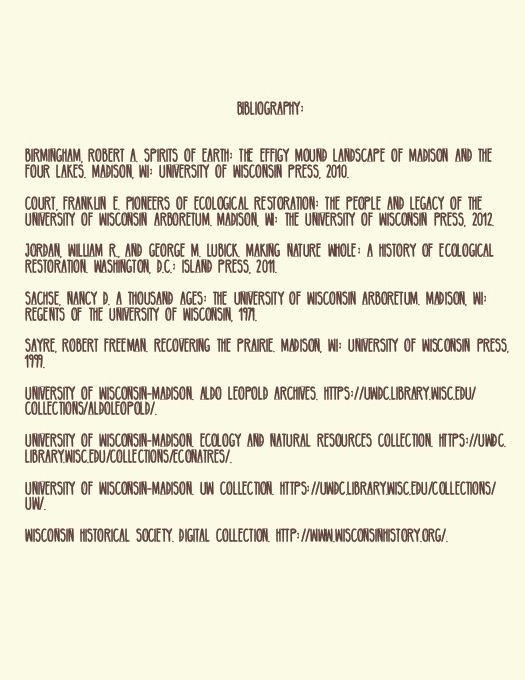 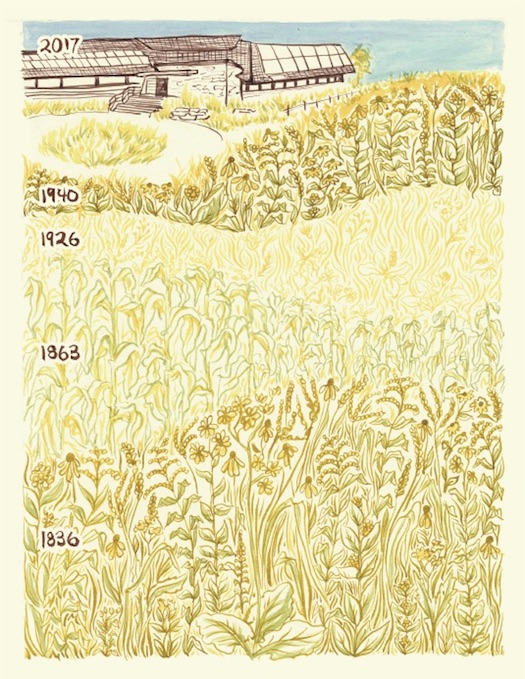 Through panels printed in prairie greens and yellows, the comics discuss prairie restoration, a practice pioneered at the Arboretum in the mid-20th century, and its focus on active management over passively setting land aside.

Kozik’s comics also share the history of the land that is now run by the Arboretum, and the people who have managed it over the past 200 years, from the Ho-Chunk Nation, to European-American farmers, through to pioneering conservationists like Aldo Leopold and John T. Curtis, the namesake of Curtis Prairie. She highlights several women researchers who have shaped the Arboretum’s restoration work throughout the decades, such as Fran Hamerstrom, Virginia Kline, and Amy Alstad, who recently resurveyed Wisconsin’s remnant prairies after Curtis’ work 60 years ago. 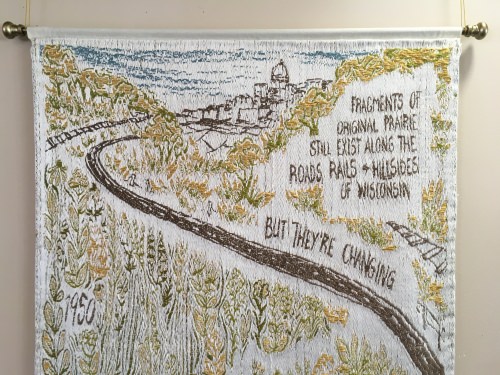 Kozik hand wove tapestries from original designs as part of her MFA exhibit.

The exhibit is supported by the David and Edith Sinaiko Frank Graduate Fellowship for a Woman in the Arts from the UW–Madison Arts Institute and the Schurch-Thomson Award from the School of Human Ecology. Kozik plans to pursue a doctorate in environmental resources through an interdisciplinary program at the Nelson Institute for Environmental Studies.

“I did grow up around spaces like this thinking that we just had prairie, and if you stop growing corn and you leave the ground alone, prairie will just come up,” says Kozik. “That’s not how it works.”

“I’m very much interested in celebrating the fact that this is a manmade landscape, that people can make a positive impact on their environment.”