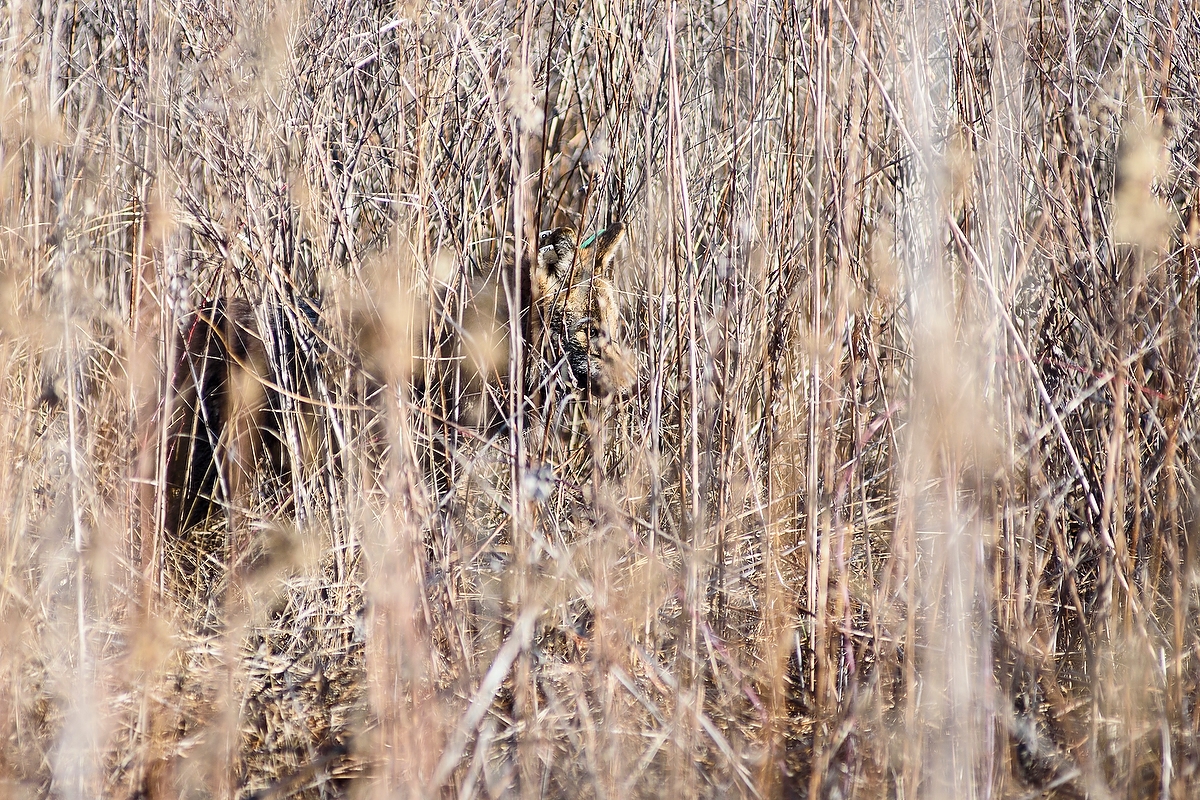 A still-groggy adult coyote stirs in the brush after being caught, sedated and tested at Curtis Prairie at the University of Wisconsin–Madison Arboretum as part of a research effort to study the behavior of growing fox and coyote populations in the city of Madison. Photo: Jeff Miller

“We have had several reports of a collared coyote displaying some unusual behavior in the last few weeks,” the University of Wisconsin–Madison research team posted on its social media page. “His unusual behavior includes a marked increase in daytime activity, and a reduced fear of cars/human activity.”

The response was rapid. In a matter of days, the post — which included tips for helping re-instill the coyote’s fear — reached 8,000 people, say project leader David Drake and lead graduate student Marcus Mueller, and it made its way onto several area neighborhood Facebook pages.

“It exemplifies one of the things we’re trying to do with this project,” says Drake, professor of forest and wildlife ecology.

Since 2014, the Urban Canid Project has heavily emphasized outreach and public engagement in the study of Madison’s foxes and coyotes. Its goal is to understand more about these city-dwelling relatives of dogs and help us all peacefully coexist. So far, its efforts have met success. In addition to an active Facebook page, the project is also on Twitter and regularly welcomes people to join them when they trap animals to tag and radio collar them for study. 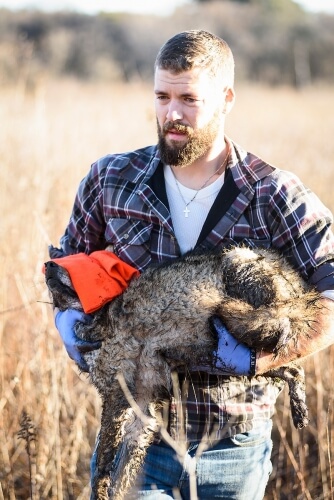 Research from across the country shows that public engagement and outreach can enhance wildlife management efforts and effectiveness, improve attitudes toward urban canids and reduce conflict between humans and wildlife.

Last year, the team created a website for citizens to report their fox and coyote sightings and interactions. To date, nearly 200 people have registered with the site and reported 250 fox and coyote observations in and around Madison. The researchers are now also looking at ways to better understand and track the use of social media as it pertains to their work.

“We want to blanket Madison with eyes and find the foxes and coyotes,” says Mueller. “This is the future of wildlife management in the city.”

Currently, the research team uses radio telemetry to follow five area foxes and eight coyotes. By positioning themselves near the animals, team members can pick up a radio signal emitted from the collars the animals are fitted with during trapping. They can study where the animals roam and get an idea about the interactions they may be having with people and other animals.

Mueller hopes the website may ultimately replace telemetry, which is resource-intensive. They are limited by the number of collars they can obtain, time, and the number of people available to go out into the field with a radio signal detector.

“It’s been really interesting to see how we can tie the website into what we’re collecting with the radio telemetry data,” Mueller says. “If we can compare it to our telemetry data and validate that it’s an accurate way to map these locations and ranges and potential habitat features that attract these animals, it can be a really inexpensive and effective way for wildlife managers to track potential issues, target areas to prevent nuisance animals and prevent coyotes from becoming habituated to people.”

There is no evidence the young, oddly-behaving coyote in Owen Park has attacked people or pets, and Drake and Mueller want to keep it that way. The animals belong here, too, the researchers say; we just need to learn how to live with them, which means taking steps like making noises and gestures to scare off curious canids, and keeping pets indoors or on leash in areas where coyotes are known to roam.

“It’s not a guaranteed sign he will start attacking dogs, just because he’s out during the day,” Mueller says. “But it’s a risk factor. We want to re-instill his fear before he starts causing damage.”

Last fall, residents on the east side were not so lucky. Coyotes attacked and killed four dogs there and wounded others. In light of these incidents, Drake met with east side residents to discuss ways to reduce the likelihood of experiencing more conflicts.

“There were probably more than 200 people at the meeting,” Drake says. “I think it was successful since, so far, attacks haven’t continued. This model can work and I think we can engage enough of the public to be effective.”

On a recent morning, Mueller and Drake were in the UW–Madison Arboretum, where two coyotes had been caught in traps. One of them was a hefty, 36-pound male.

“We’re fairly confident that we have a breeding population of coyotes here,” says Brad Herrick, ecologist and research program manager at the Arboretum. “We hear them and so do our neighbors, we see coyote scat, and we’ve occasionally stumbled on a den, but we almost never encounter them and only know a little about them.”

A married couple also joined the Urban Canid Project researchers that day. The pair had signed up to participate in trapping and Drake says the experience gave them “a whole different perspective of the animals.” He sees this time and again among the people who accompany the research team.

Also with the team that day were four UW–Madison School of Veterinary Medicine (SVM) students, including Holly Hovanec, who as a UW–Madison undergraduate worked with Drake in the early days studying the foxes found living on campus.

Drake says the SVM now has a list of 40 students who take turns working with the research team; one of the goals of the Urban Canid Project is to monitor the health of the animals they track. The researchers swab the nasal and rectal areas and collect fecal and blood samples from each trapped animal and test them for disease, particularly those also found in the domestic dog population, like heartworm. The animals have so far been fairly healthy.

The researchers say that what’s happening here in Madison — coyotes sometimes attacking dogs, foxes stealing backyard chickens — is not unique. It’s “just part of what these animals do,” Drake says.

“All of the animals we’re catching, their body condition is very good,” Drake says. “Animals are like we are: The more nutritionally healthy they are, the stronger their immune systems. … These animals certainly aren’t missing meals and since there is plenty for them to eat, I’m guessing they can stave off disease easier than rural coyotes and foxes who may not be as nutritionally healthy.”

Incidentally, the SVM recently treated a 5-pound Yorkshire Terrier named Buddy, who was taken by two coyotes from his home in Rockton, Illinois, and found barely breathing by neighbors the next morning. After five-and-a-half hours of surgery, Buddy pulled through.

Mueller is optimistic their research efforts can help spare other pets in the future by helping to head off problems before they occur and by assisting wildlife managers who deal with problem animals. Wildlife managers often have no way of knowing which individual animal was responsible for an issue like an attack, so the wrong animal or animals may be removed, often leading to a vacuum that is quickly filled by others.

“It’s a pretty cool management implication,” Mueller says. “If people report an ear-tagged animal and there is a way to map not only where the animal is but that it’s become habituated, if you need to remove an animal, that is most likely the one we would target.”

The researchers say that what’s happening here in Madison — coyotes sometimes attacking dogs, foxes stealing backyard chickens — is not unique. It’s “just part of what these animals do,” Drake says. “We’re just in closer contact with the coyote and fox, and there is incentive to come into yards because there’s food and it’s part of their territory. It’s certainly unfortunate, but it’s not unexpected.”

For Drake, the experiences have been incredibly rewarding.

“I feel like we’re making a difference with this research, and the outreach, especially,” he says. “Not only is peaceful coexistence part of it, but so is engaging the public, increasing tolerance and reminding people that nature is pretty dang cool, even in cities.”